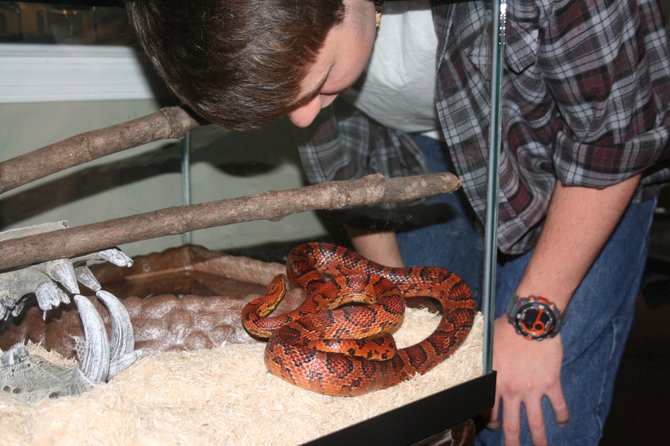 Indiana Jones may not enjoy slithering serpents all that much, but the Lewis family, on the other hand, welcomed corn snake Cory into the house 10 years ago, and has been caring for her ever since. 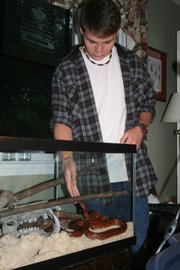 Daniel Tomlin reaches into Cory’s cage to pick her up.

“When we got her, she was the size of a pencil,” teacher Louise Lewis of Fairfax said. “Now, she’s about four feet long.”

Lewis said Cory was originally acquired from a reptile show in Maryland, after which she was used to help her son Jamie complete a requirement for the Reptiles and Amphibians Boy Scout merit badge. She said Cory quickly became established as a permanent fixture in the household not long afterward.

“For the merit badge, you’re supposed to care for a reptile or an amphibian for 30 days,” Lewis said. “We could have just borrowed someone’s turtle or frog, but I never bothered to read the requirements. [The family] grew attached to this snake. They had planned all along to get and keep a snake, they just didn’t tell me that plan.”

Lewis said Cory is an appealing pet to keep because of her low-maintenance nature, as well as her captivating movements.

“You defrost a mouse a couple of times a week and feed her, and that’s about it,” Lewis said. “When she comes out, she’s really pretty and kind of cool, the way she moves around and holds herself up. We’ve got some branches and a fake hippo doll in the cage, and she coils and wraps around those as well.”

“You defrost the mouse, then you wave it in front of her like a live thing, so she attacks it and swallows it, working it down in big gulps,” Lewis said. “The jaw comes apart and swallows this huge thing, bigger than her head; it’s fascinating, how she gets her jaws apart and pulls it down.”

Lewis said her family may look into getting other reptilian pets like Cory sometime in the future.

“We probably will [get other reptiles] because Cory’s very low maintenance,” Lewis said. “We’ve had parakeets that have died, hamsters that have died, a mouse that had a seizure, a dog that got sick and died, a cat I got allergic to. We’ve kind of had psycho pets, and a snake seems to fit right in.”