Snakes — Misunderstood and Mistreated All Too Often
Votes

Snakes — Misunderstood and Mistreated All Too Often 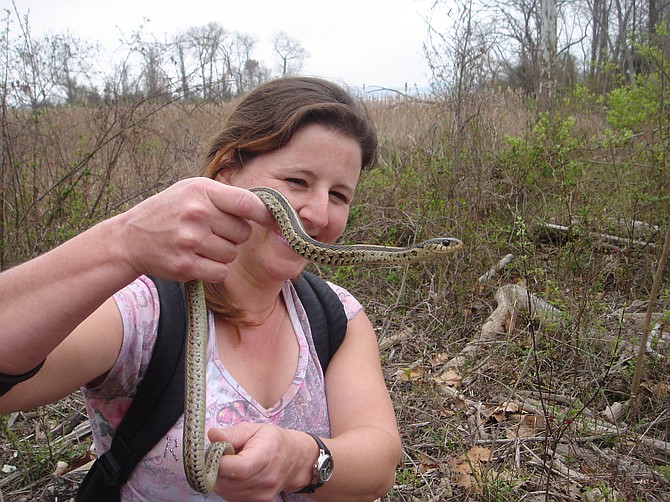 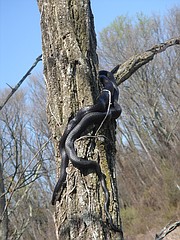 Eastern rat snakes like to bask in the sun in trees in Dyke Marsh and elsewhere.

The rough green snake is quite stunning when it climbs trees in Dyke Marsh. 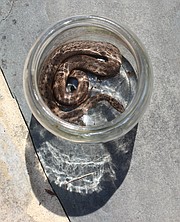 Theressa Hillian caught a Dekay's brown snake in her yard and put it in a jar to get an identification.

Working diligently in her home office recently, Anita Drummond was jolted from her project when she spotted an eastern rat snake slithering down a nearby tree and through the leaf litter in her Tauxemont backyard. A few blocks away in Hollin Hall that same week, Theressa Hillian happened upon a Dekay’s brown snake under some empty mulch bags. Dekay’s brown snakes are often misidentified as baby copperheads, so she was relieved to learn that it was not venomous.

As temperatures warm, snakes leave their winter hibernacula and become more active. Snakes can range from five inches long to 30-feet. Think Burmese pythons. Legless reptiles with many joints, snakes can crawl, climb and swim. Their forked tongue is a sensory organ that helps them smell.

Snakes’ “paired organs are staggered to fit inside their long bodies and most lack a working left lung,” wrote Alonso Abugattas in The Reptiles and Amphibians of the Washington, D.C. Metropolitan Area. “All are carnivorous or eat eggs and they swallow their prey whole.” A May 2 Washington Post article reported that Jennifer Riley, a Blue Ridge Wildlife Center veterinarian, surgically removed an indigestible golf ball from a snake’s gastrointestinal area.

Fairfax County has around 20 snake species, according to county Wildlife Biologist Katherine Edwards, most of which are non-venomous and pose no threat to people, she says. The only venomous snake typically seen in Fairfax County is the eastern copperhead. Adult copperheads usually have a bronze-colored, triangular head, hourglass-shaped bands and cat-like vertical pupils. Non-venomous snakes have round pupils.

Snakes get a bum rap. In the Bible, a serpent in the Garden of Eden convinced Eve to eat forbidden fruit. Adam tried it too, triggering God to expel them from the garden. Folklorists have used snakes as a metaphor for evil. Medusa of Greek mythology had a head of venomous snakes. If you stared into her eyes, you would turn to stone.

One traditional medical symbol, including the U.S. Army Medical Corps, has traditionally been a winged staff with two entwined snakes. Snake venom has potential therapeutic properties, according to National Institute of Health experts.

Snakes are a natural part of our environment. “Snakes play an integral role in maintaining balance in the ecosystem by serving as both predators and prey,” Edwards explains. “Snakes provide a valuable service helping keep insect and rodent populations in check. Snakes should be respected and not feared.” Snakes can be a sign of a healthy environment.

In the Dyke Marsh Wildlife Preserve, eastern rat snakes bask in the trees on sunny days. Adults are shiny black with a white throat and a partially checkerboard-patterned belly. They eat white-footed mice, primary hosts for ticks that carry Lyme disease, for example.

Snakes do not bite people unless provoked. Most snake bites occur when someone deliberately threatens, handles or harms the snake, causing it to become defensive. “The key to being safe around snakes is to give them their space and simply leave them alone,” says Edwards. “When they encounter people, their usual reaction is to flee and seek refuge.”

So, what should we do about snakes? Admire their silent, slithery movements and let them be.

Supervisor Daniel Storck will host an online meeting on May 19, 7 p.m., at which county animal protection and wildlife staff will discuss human interaction with wildlife. Visit https://www.fairfaxcounty.gov/mountvernon/.