For some, it starts out on two wheels. 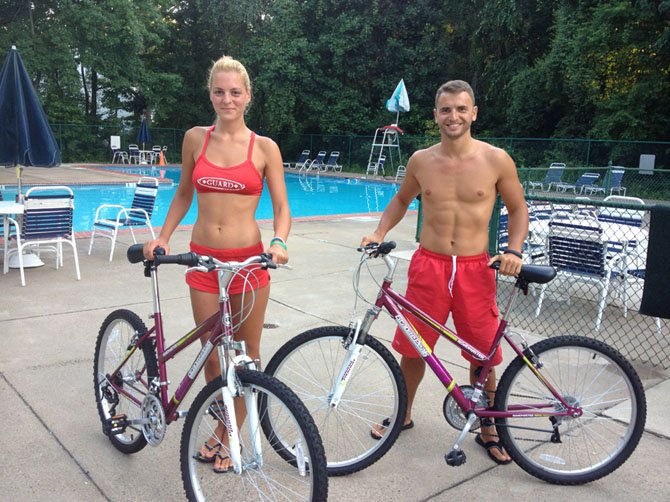 Every day, Vasyl Smolii uses two different routes when he bikes to and from work at the Belle View pool in Alexandria. Coming down the hill on Belle View Boulevard is an easy ride in the morning but going back up in the evening is not as easy on the bicycle Smolii rents from his sponsor High Sierra Pools, an Arlington-based pool management company.

"I must buy this bike for the summer," said 19-year-old Smolii from Ukraine.

For Martin Stefanov and Victoria Tshacheva, the bikes are their transportation this summer as well. In the evenings, six bikes are parked on the first floor patio of the apartment they share in Kingstowne with other lifeguards who are also from Europe.

This is Stefanov’s second year lifeguarding; Tshacheva heard about his adventures last year while they were attending Sofia University in Sofia, Bulgaria. Tshacheva is studying public relations. 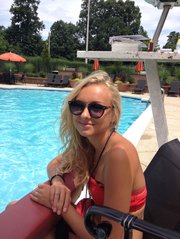 Victoria Horbenko from Ukraine holds on to a float and scans the pool in Fairfax.

"This country is much different, you can see different cultures, a lot of people from the whole world, you can learn a lot of stuff," she said.

RIDING BIKES TO WORK was one of those things she is learning. Biking in Bulgaria "is not so popular," she said, but she may continue when she goes back. "I will ride the bike in my country, I think so," she said.

At the EOS Twenty One apartment complex in the Landmark area of Alexandria there are two pools, one manned by a pair of 20-somethings from Poland, and the other by twin sisters Irina and Olha Shemchuk, also from Ukraine. These lifeguards, who went through U.S. Aquatics for their summer jobs, don't ride bikes to work. The pair from Poland are staying in an apartment with three other lifeguards close enough to EOS to walk to work, and for the Shumchuk sisters, "our driver picks us up every day," said Irina Shemchuk.

Transportation is one of the concerns of Doug Winkler, owner of Winkler Pool Management Inc., with an office in Springfield. They employed 260 lifeguards from various countries this year, such as Ukraine, Serbia, Turkey, Jordan, Bulgaria, Azerbaijan, Dominican Republic, China, Slovakia, Russia, Poland, Egypt and Kazakhstan. The Winkler lifeguards either walk, use public transportation, have drivers, like the Shemchuk sisters, or use bikes that Winkler supplies for a deposit.

Winkler, who lifeguarded when he was a teen, remembered his years on the lifeguard chair as a "great job," but noted that "the desire is not there in American kids anymore, they don't want to work." Lifeguards from overseas want to travel and experience the United States as well as earn some money.

All of the lifeguards get training in their home countries and another course here before starting. According to High Sierra Pools, which has job fairs in the U.S. and internationally, "All of our representatives are former lifeguards to give you the inside scoop," on the job, according to its website. "High Sierra works with U.S. visa sponsors to promote our jobs with the help of partner agencies worldwide."

Communicating in English is key. For EOS lifeguards Weronica Mikoljczyk and Agnieszka Kaczmarek from Poland, this is their second summer lifeguarding in the U.S. Before starting, they were interviewed via Skype to get a sample of their dialect, and "the tests are in English," said Kaczmarek. Smolii's English has improved since Memorial Day, but "when I arrived, I had very bad English," he said.

Kaczmarek was a swimming coach in Poland, so she gives some of the children at EOS swimming lessons "before it opens," in the morning. Mikoljczyk was a lifeguard on a lake close to Poznan, a city in Poland, and both know synchronized swimming which they also share with the children at the pool. "I love kids," said Kaczmarek, and the "kids love us," added Mikoljczyk.

Over at Belle View, Smolii had to rely on his training early on this summer, rescuing a resident in distress. "My first week, a woman at Belle View was swimming and got a cramp. I jumped in with my rescue tube, take her shoulder," he said, reenacting the procedure. Smolii is with High Sierra, and they check his lifeguarding skills every month, he said.

ALTHOUGH MOST of the lifeguards work long days that stretches to more than 40 hours a week, they do find time to enjoy their American experience. Smolii went to Ocean City, Md. with another lifeguard and experienced the ocean and eating crabs for the first time. The crab mallet techniques was tough to master at first and he ending up splattering crab all over him until "waiters showed us the correct way," he said.

Stefanov took a day trip to New York City for a fellow lifeguard's birthday. "It was amazing," he said.

For another Ukrainian, Victoria Horbenko, a lifeguard in Ellipse at Government Center off Lee Highway, her summer at poolside is "like a student exchange, to get new experience," she said.

The lifeguards are hot and cold to American food. Stefanov and Tshacheva in Kingstowne try to eat healthy and "cook a lot in our apartment," said Tshacheva, noting that her father in Bulgaria "cooks, it's the most delicious food," she said. She's familiar with the obesity trend in this country. For the twin sisters, the "food here is very bad," said Olha Shemchuk, "too many sweets." Her sister Irina is not a fan of American bread. "Your bread is not bread," she said.

There are still community pools that only hire teenagers from the neighborhood for the lifeguard positions such as Hunt Valley pool in Springfield. According to manager Lauren Blackburn, "We all live right here."

Hunt Valley lifeguard Luke Chapman, 17, went to a class to become a pool operator and noticed "they were all Eastern European," he said.

Winkler noted that being in the community they grow up in has advantages, as when he was a teen and "many evenings, some of the pool patrons would bring me dinner." On the other hand, being in charge is a hard sell to friends. "It's tough for them to be disciplinary," he said.

The summer abroad is making an impression on Tshacheva . "Here we are so separate from our life in Bulgaria. It will be so different when we go back," she said.

For Olha Shemchuk, 19, she might give it another summer, after she turns 21 so she can go dancing and clubbing. "We are young," she said.