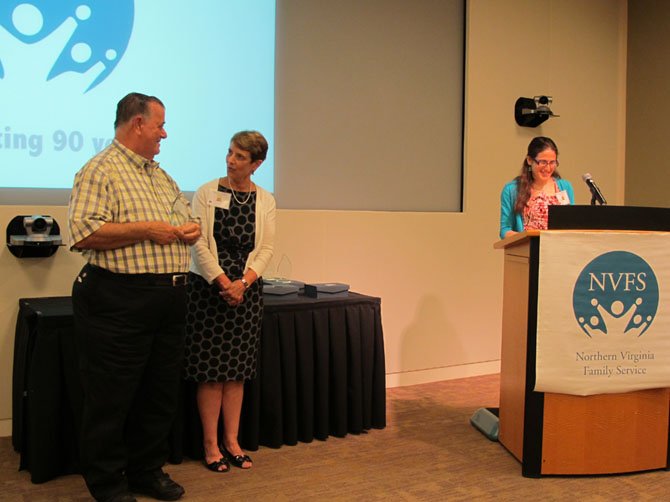 Mary Agee, NVFS president and CEO, and Karen Horowitz, director of volunteer and internship engagement, present Ralph Lickey with the Presidential Award for Community Volunteers at the agency’s annual meeting, June 12, at the Capital One headquarters. Photo by Tonya McCreary

An organization does not thrive for 90 years by chance.

Northern Virginia Family Services, a county institution, has impacted families throughout the region for nearly a century with no sign of slowing down. 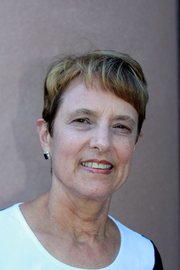 NVFS CEO and President Mary Agee is retiring next summer.

CEO and President Mary Agee, who has been at the organization for 46 of those years, has seen the nonprofit flourish during her time there.

“In reading the history, there were a lot of passionate and smart people that were on the board in the ‘20s, ‘30s and ‘40s,” she said. “Very adaptable and very principled. That’s the other thing that struck me — that the decisions were based upon doing the right thing and never turning a child away.”

She said that even today, her staff is willing to push boundaries while still adhering to the organization’s mission.

NVFS opened its doors in 1924 as a family counseling center; it was run by a single volunteer at the time.

Agee joined the 11 person staff in 1972. She just announced her retirement, effective next June, on Monday.

The budget is now $32 million and staff count has soared to 350 people. One of those staff members is current Chief Operative Officer Cheri Villa who has been with the organization for five years.

“One of the reasons I came here was to work with Mary on her vision,” she said.

Recently, the organization has helped families who have suffered during the recession to adapt to the change.

“I think one of the most interesting things is when you look at our history, it’s a reflection of the region as a whole,” said Villa. “As community needs have emerged, Northern Virginia Family Services has stepped in.”

In the last 20 years, affordable housing and mental health issues were added to the list of NVFS’s concerns. However, Agee does not think they were ever a non-issue for the area.

“The needs in the community have absolutely not changed,” said Agee. “The thing that has changed is the faces that use them.”

She said that the organization had the chance to help its community during the response after a plane struck the Pentagon on Sept. 11, 2001.

“It was an honor to be asked by the Community Foundation of the National Capital Region to design a program that would support the families that were impacted by the attack on the Pentagon,” she said. “What that taught was how to perfect a case management model — help them recover from trauma and bring in a number of resources.”

She said the leadership the organization showed made NVFS a national leader in trauma response. It is currently poised to help the numbers of children that have crossed the border into Texas.

But it does not do the work alone. Many of the issues that leaders at NVFS are passionate about are also tackled with other local organizations.

“I think collaboration is a big part of our success,” she said. “These issues are so big that you have to tackle them together.”