Music Returns to the Town Green 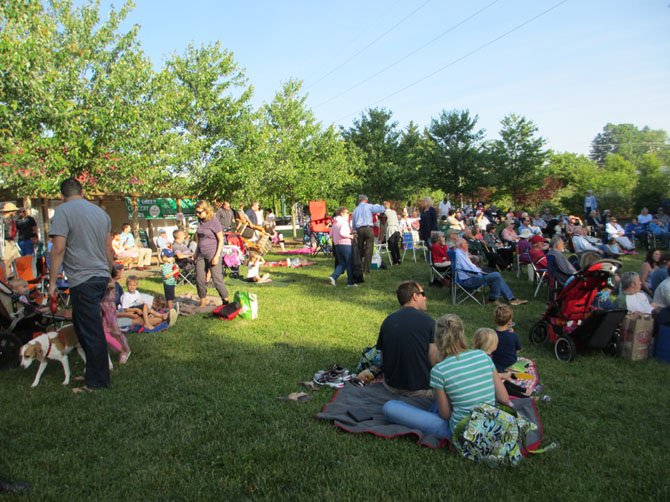 It’s that time of the year when the Town Green is dotted with families and friends listening to live music sponsored by local businesses. Photo by Donna Manz.

The Vienna Town Green concert series kicked off on Friday, May 30 with a performance by Bill Emerson and the Sweet Dixie Band, and a tribute to the late mayor M. Jane Seeman. The band was a personal favorite of Seeman and the Town paid a fitting tribute to her memory with lit candles as the concert closed. Mayor Laurie DiRocco spoke briefly on Seeman’s legacy.

For families lazing on the blankets or on lawn chairs, the concert heralded the beginning of early summer.

“We look forward to spring,” said 52-year Vienna resident June Terry, who has been coming to the concerts with her husband since the performance series started. “When we see the notice in the town newsletter, we say, ‘spring is here.’”

As is common during the concerts, the lawn was dotted with families with young children, seniors and friends sharing picnic dinner or snacks. Some said they came spontaneously. Others were looking for something to do on a warm, bright spring evening. The Molinini family was there for the first time, celebrating dad Louis’s birthday. “Mom heard they were having music here tonight, so we came,” said 7-year-old Joseph Molinini. “We have a lot of open space.” When 4-year-old Matthew Molinini was asked if he liked the music, he answered, “I think I want pudding.”

“You can’t beat the entertainment. We like the variety,” Terry said. “This is a good place to gather and see the community.”