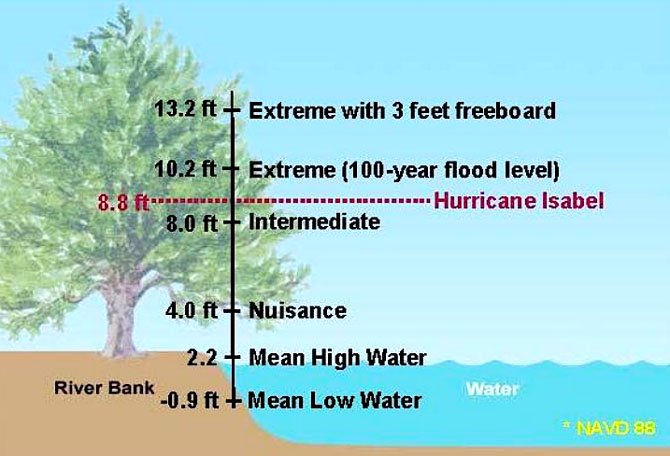 Every heavy rainstorm seems to bring a flood of news trucks, which arrive at the foot of King Street and set up television cameras. The images of flooded streets have become a regular feature for television news segments because the images are so shocking. Now city leaders are planning to raise the elevation of the waterfront to six feet, preventing flooding for most major storms.

"It's' not a significant height increase," said Anthony Gammon, a civil engineer with the Department of Project Implementation. "But it does provide a significant level of flood mitigation above what's there today."

The proposal is not without detractors, especially considering it was part of the controversial waterfront plan that more than doubles density at three sites along the waterfront compared to what's there now. Critics say raising the elevation of the waterfront will end up trapping water on the land, denying it an opportunity to drain and swamping the pumps designed to get rid of it.

"It's overkill," said John A. Kupersmith, vice president of an Alexandria-based marine and environmental engineering firm. "Its efficiency can be duplicated at a fraction of the height, and it does not protect Alexandria from storms."

Courtesy of the City of Alexandria.

CITY OFFICIALS say they do not yet know how much the flood mitigation measures will cost. In a memorandum to the City Council, Planning Director Faroll Hamer explained that the consultant team and staff have begun developing and reviewing cost estimates. But she added that they have not been able to give the numbers the "level of detail and scrutiny" needed to provide an "appropriate comfort level" on their accuracy.

"The scheduled time for staff and the consultant team to work on cost estimates was superseded by work on supporting the negotiations with the Old Dominion Boat Club and incorporating the design changes that reflect the club’s relocation," Hamer wrote.

Critics of the city's plan say it will be an expensive solution that will fail to protect Alexandria from major storm events. During a recent Planning Commission public hearing, Kupersmith presented a disaster scenario in which the flood-wall would be overtopped and the pump stations would stop functioning. Parts of the city would have to be evacuated and debris would clog the drains. City officials acknowledge that the pump stations would stop working temporarily, but they say the system has been designed to handle that.

"They will kick on and start working again when the water recedes down below elevation six," said Emily Baker, director of the Department of Project Implementation. "We think this system has been designed in a way to operate during a flood event, and continue operating after a flood event."

"May I make one quick point?" asked Kupersmith, who wanted to respond to Baker.

"No," replied Eric Wagner, chairman of the Planning Commission.

"Building flood mitigation to a four-foot level would be a little like building a house at six feet," said Planning Commission member Nate Macek. "A lot of us would be hitting our heads if the ceilings were that low in our house."

Critics say the flood mitigation efforts might end up doing more harm than good. When Waterfront Park is raised from a two-foot elevation to a six-foot elevation, for example, a new downward slope will be created to the west. That means water will not be able to drain, and the six-foot elevation will end up trapping water on the land instead of allowing it to drain.

"If it overtops at six feet, you are going to have to wait two or three days for the pumps to kick back in," said Kathryn Papp, associate fellow at National Council Science and Environment. "I think that we need to do a lot more hard thinking on that."

City leaders say they hope to have cost estimates for the flood mitigation efforts this fall.