Uncovering the building blocks of African-American community in Fairfax County in the Post-Civil War Era. 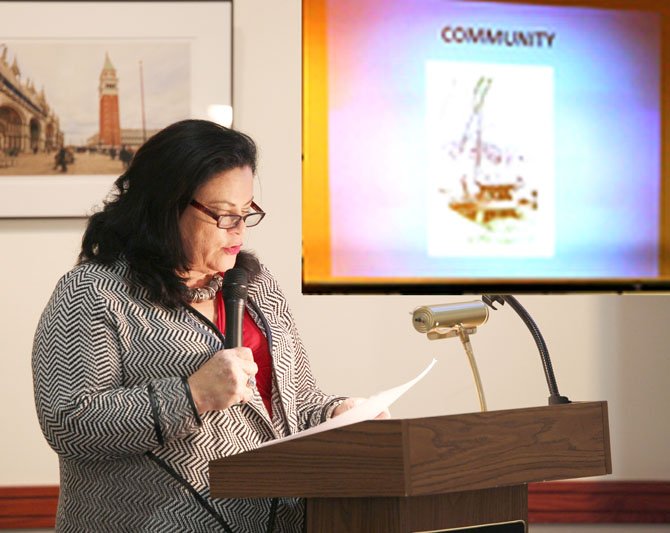 By By Archie Brown

“History is never ending. So many of these communities are gone… It’s important to collect and preserve community history.”

Dobbins stated, “History is never ending. So many of these communities are gone… It’s important to collect and preserve community history.” She presented a “skeleton review” of what she hopes to include in her doctoral dissertation work beginning this fall at George Mason University.

Virginia had the highest population of slaves in the U.S. and profited immensely in the production of slaves for export to southern states. Emancipation instantly freed four million slaves - a freedom which rapidly eroded with the failure of reconstruction in the late 1870s. Changes in constitutional law and “societal fear” directly impacted the rise and fall of community life throughout the entire struggle for freedom which spanned across the late 1700’s to the late 1900’s. Early signs of community formation were found in the Contraband Camp Wadsworth near Langley. Freed slaves with no citizenship rights were considered to be confiscated property or contraband.

Dobbins identified the building blocks which enabled the formation of community and then cited contributions which resulted from the shared goals of the larger “inter-connected community” across Fairfax County. She stated several times that survival of African American communities was a function of communication, church, education, land and commerce.

Communication traveled fast, largely by word of mouth. By 1831, after Nat Turner’s Rebellion, the laws in Virginia forbid both the enslaved and freed persons of color the ability to read or write. Alternative methods of communication emerged as a result. Late night gatherings, bush harbor prayer services and secret pathways, to and from various plantations allowed slaves to congregate and create community. Music, singing and dancing were other forms of non-verbal communication.

Church offered spiritual relief, hope for a better life and organization. Connected by Northern Virginia Baptist Association, 52 churches were created after Reconstruction. Dobbins emphasized the role of larger church networking and recalled her family’s attendance of several of these churches as a child. Smaller churches such as The Salem Baptist Church of Great Falls played an equally significant role in uniting family to causes in the local community.

Education is the mark of progress and progress was impossible without education. As an ethnographer Dobbins interviewed the children of Thomas and Geneve Johnson - Rebecca, Carol and Doris, ex-residents at 1000 Leigh Mill Road, who indicated that there was “good racial harmony” in Great Falls. The Johnsons looked forward to seeing a black horse wrangler named “Goldie” at Reinhart’s Rodeo which was a Great Falls desegregated event every year.

Education, however, was segregated and the Johnson children attended all black schools beginning in Odrick’s Corner, then Louise Archer Elementary and Luther Jackson High School which was later desegregated in 1964. Contributions of Louise Archer, principal of the segregated Vienna Elementary School, were highlighted in a video presentation.

Land was key to independence and ownership was always strongly emphasized within the community. When the opportunity to own land arrived they bought all they could. A large portion of land obtained by Fairfax County African Americans from 1863-1890 was enabled by General John S. Crocker (Retired), who openly sold land to non-whites. Cyrus Carter purchased 21 acres from Crocker. Another ex-slave, Frederick Foote, Sr. purchased 50 acres from his slave-owner, which eventually became Seven Corners.

Commerce resulted when black farmers sold produce back to General John S. Crocker who was the Director of the D.C. Jail system. Cyrus Carter of Lincolnville had agreements with Crocker and also sold produce outside Liberty Street Market creating finance for community developments. Black farmers sold at smaller community stores but the cost of selling inside Liberty Street Market was extremely expensive. It can be assumed that most sold outside of the market.

Notable contributions were identified in George Washington’s attempts to transform the Dismal Swamp with slave labor, and later the use of slave labor in the building of the Patowmack Canal 75 year project. Another African-American of interest was Alfred Odrick who created a public school on his 30 acre Mclean property “Odrick’s Corner.”

GFHS extends a special thanks to Dobbins for a very insightful program and wishes her success as she pursues her Ph.D. at George Mason University.