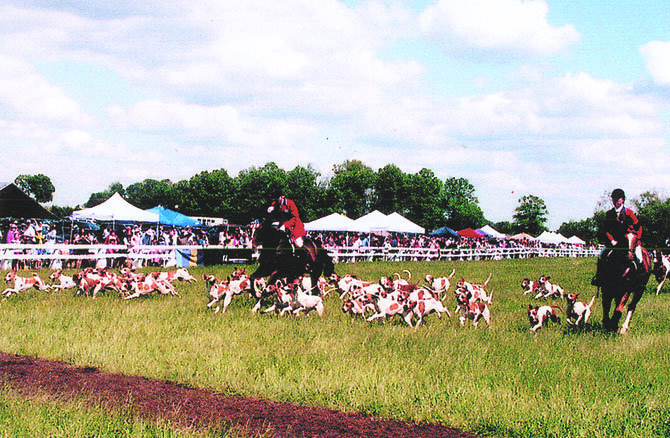 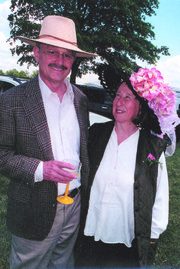 Yes, there were horses, plenty of them, at the 62nd annual Potomac Hunt Races last Sunday, but it was the crowd that had officials and old-timers talking.

Those attempting to arrive prior to the 1 p.m. starting time for the first of the seven-race program found River Road backed up then, but it wasn’t until 3 p.m. that Crawford said, “I have had the gates closed. There’s just no more room for parking,” and this is on the Kiplingers’ 100- plus acre field where Austin explained, “used to be my corn field.”

However, for the fortunate estimated six to seven thousand point-to-point race enthusiasts, most of whom packed elaborate tailgate picnics to sustain them and their guests, while watching the race program for the next six hours, there was plenty of excitement. This included a demonstration by the Montgomery County division of the Maryland National Park Police. Mounted officers played soccer with a gigantic ball. Following that, crowds of youngsters were invited to participate in other games with them.

But, back to the races, ostensibly why everyone was there. Not that the gorgeous spring day in May had nothing to offer. Only perfect, with low 70s temperature with lots of sunshine, enough to bring out ladies in their spring hats. In this department, Dana Semmes was the show stopper. She sported a large chapeau decorated with huge pink geraniums. Running a close second to Dana, Denise Reed’s hat was purchased at the races from one of the vendors doing a tremendous business selling, what else, hats. “You had better wear it. I paid $90 for it,” her husband, Rex, jokingly challenged. He also had previously selected it, unbeknownst to her.

Once again, back to the races. There were seven in toto, well, actually 10, counting the three pony races at the program’s conclusion held in honor of the late Cpl. Kirk J. Bosselmann, son of a race co-chairman, Beverley Bosselmann and her husband, Rainer. The large pony race, the very last of the day, was won by 15-year-old Erin Swope, who earlier won the second event of the day, a mile flat race, the Travilah Cup, astride her own “Slaney Rock.” Swope trained both of her mounts.

The other two-time winner of the day was Irish born and raised (CountyWaterford) Mark Beecher who rode “Canyon Road” to win by a head the Alice Keech Perpetual Plate, a two mile over hurdles event. He later won the Preakness (three miles) novice timber race astride Rebecca Shepherd’s “Searubyrun.” Beecher, relatively new to the area, rode the winner of the prestigious Maryland Grand National earlier this month in the Baltimore area.

When the Charles E. Payne perpetual trophy was awarded to Lilli Kurtinecz riding “Manchurian High” for winning the first of three flat races of the day, hundreds of tailgates were in full swing, complete with tables festooned with enough heirloom silver platters of fried chicken to stretch from Kiplingers’ Poolesville farm to the Potomac Crossroads. “We sent over a hundred invitations,” (to their tailgate) Vicki Crawford remarked while talking with a cousin, Mark Letzer, who drove over from Baltimore for the day. It appeared they all accepted.

After surveying many tailgaters, each presentation as glamorous as the next, it was apparent the crowd was well fed. In addition there were food stands among the vendors. Also there was plenty to see. Among the most magnificent sights was the presentation of the Potomac Hunt hounds and hunt staff who brought the pack out on the race course and rode with them past thousands of spectators who stood in awe of the beautiful spectacle, including many of whom probably had never seen a pack of foxhounds.

Once again, back to the races. (Sorry. There was just so much to see and do.) By race four of the program, the WJLA sponsored Preakness open timber with a $7,500 purse to the winner, things had gotten off to a good start. Well almost. Apparently, from reports of those near the starting lineup, the starter dropped the stick after a fractious entry had already jumped the gun and was on his way. Fortunately, the more-than-anxious entry did not win. He surely would have been disqualified. As it happened, “Personal Brew” ridden by Forrest Kelly placed first with a strong finish. Fritz Bonaface on “Wingo Star” was second in the eight horse race.

Veteran jockey Woods Winants riding Randy Rouse’s “Hishi Soar” in the General H.H. Semmes open hurdle race did not disappoint the crowd with his spectacular ride, nipping Mark Beecher on “Meganisi” by two lengths at the finish, denying Beecher of what would have been his third win of the day. The luck of the Irish escaped Beecher on that one. Winants, who just recently won at the Middleburg (Va.) races shared his win with Rouse’s trainer Brian Able. “He gets lots of credit. He rides him every single day,” Winants remarked. It was the first time in recent memory the 97-year-old Rouse was not serving as a racing steward. Reportedly he was, however, at the race to see his horse win.

By the end of the last event and close to 7 p.m., people and equines were more than ready to call it quits. Thankfully, the most serious accident of the day occurred when a man carrying his cooled down barbecue apparatus, tripped en route to his car and sent grill, tops and dead coals flying. Just a few of his choice words were all that was needed for him to pick up and carry on.