Preschoolers have opportunity to climb on heavy equipment. 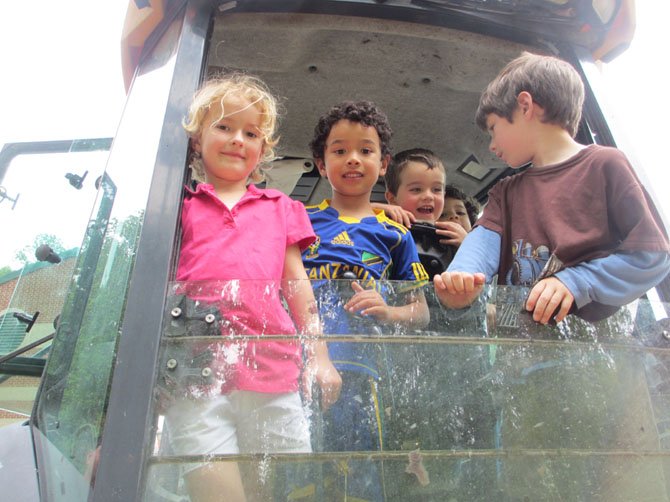 To a young child, there’s no question --- the bigger, the better. Witness the euphoria and unbridled enthusiasm of hundreds of preschoolers who climbed onboard heavy equipment, from front-loaders to ditch-diggers, at the Town of Vienna’s annual (and very popular) Public Works Day open house on May 15. Kids had the opportunity to sit in police vehicles, crawl into the animal compartment of the police department’s animal control truck, get tattoos, and grab loads of complimentary packaged snacks, as well. The congenial staff of the Public Works Department was there on-hand to boost the children into equipment cabs and ensure their safety.

Some kids sat in cabs trying to move levers; others, such as 4-1/2-year-old Seth Miller, thought it was fun to pretend to be arrested. “I really like to see the big trucks and the police cars,” said Seth. “I want to break out of jail.”

Inside the public works building, a garbage truck stood tall on a lift. The Town of Vienna provided bags of savory and sweet treats for its guests, as well as cold drinks. A highlight of Public Works Day is the free raffle where kids had the chance to win models of construction equipment. Freshly-popped popcorn was handed out, too.

When queried, most of the preschoolers responded in a like-minded manner. They really liked climbing on the big trucks and equipment. Five-year-old Priya Robbins had her own perspective. “I like the fire truck the best.”