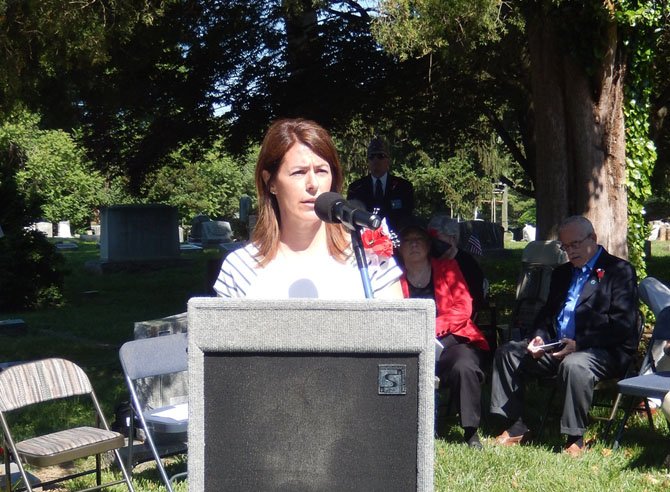 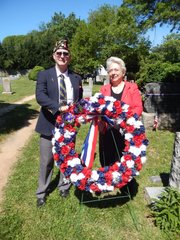 The laying of the wreath by Joseph Payne, American Legion Post 180, and Emilie Larson, Unit 180 president.

“May our veterans rest in peace,” said Post 180 Chaplain Bob Hatter in the event’s opening prayer. “May we never fail to remember the awesome cost they paid for the freedoms we have today.”

DiRocco said Memorial Day is considered by many as a day to have cookouts and relax with family and friends. But it’s also important, she said, to remember why this day is celebrated – in homage to U.S. veterans.

Recognizing the WWII veterans in attendance, she told them, “We’re so honored to have you with us. My grandfather and father-in-law both served in World War II, and we should take time to remember all the men and women who died for us.”

Connolly said the toughest part of his job is when he has “to call a family who’s lost a son or daughter in Iraq or Afghanistan.” Even though military personnel and their families know the risks and dangers inherent in that profession, he said, “There are no words to stem the tears that are going to flow.”

Noting the 250,000 flags placed on veterans’ graves at Arlington National Cemetery, Connolly said, “America is a great country because men and women have been willing to put on that uniform and, on occasion, make that sacrifice. Let us not forget the fallen.” 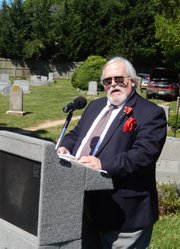 Vienna Planning Commissioner Walter I. Basnight Jr. was the keynote speaker. He said the personnel-related training he received in the Air Force laid the foundation for his later career in that field.

“In my job, I sent young folks to Vietnam,” he said. “My choice was to think of them as faceless numbers or as individuals with a history and, hopefully, a future. I chose the latter. And on Memorial Day, we come together to recognize the sacrifices of those who paid the ultimate price for our freedom.”

Acknowledging Flint Hill Cemetery’s history, Basnight said it’s one of Fairfax County’s oldest community cemeteries. Dating back to 1852, it was originally called the Flint Hill Burial Ground when Oakton was known as Flint Hill. Buried there are prominent civilian and military figures, including at least 26 Civil War veterans – four of them members of Confederate Col. John S. Mosby’s Rangers.