Technically June 24 is the primary, but almost certainly, the primary winners will win in November.

Potomac — The Primary Election for Montgomery County state and local offices, plus members of Congress, is Tuesday, June 24, 2014.

If you want some choice in who will represent you on County Council, as County Executive, in the Maryland General Assembly, now is the time to engage. If you think it doesn’t matter much, these are the people who make land use decisions, decide what to do with county property, who set tax rates, who decide how much money will go to schools, who control services that affect traffic and many other things that affect quality of life more than anything that happens at a national level.

Currently, all of Montgomery County is represented by Democrats at all levels.

This week, the Almanac continues coverage of particular races that will be decided in the primary election with County Executive. Candidates responded to our request for information about why their candidacy matters, and why in Potomac in particular. Candidates also provided a short bio. These responses have been edited for length, but are in the candidates’ own words.

In coming weeks, we will publish responses from candidates for County Council at Large, and candidates for State Senate and Delegate from Districts 15 and 16.

Phil Andrews has served on the County Council since 1998 (representing District 3 - Gaithersburg-Rockville), and served as president of the Council during The Great Recession of 2008-09. He has chaired the Council's Public Safety Committee since 2000, served on the Education Committee since 2006, and is the former chair of the Region's Emergency Preparedness Council and the County's Domestic Violence Coordinating Council.

Andrews was the chief sponsor of Montgomery County's Living Wage law, Smoke-free Restaurant law, the law that reformed the County's abused disability retirement system, the law that expanded employment opportunities for qualified people with severe disabilities, and the law that repealed the requirement that pensions be calculated as if a canceled pay raise had not been, saving taxpayers $280 million. He is also the chief sponsor of the pending bill that would establish the region's first public financing system for County elections.

Prior to his election to the Council, Andrews served as executive director of Common Cause Maryland (1988-1994), where he led efforts that resulted in the first limits on PAC contributions in state and county elections, and strengthened the state's Open Meetings law. Andrews served as the first director of Montgomery County's award-winning AmeriCorps national service program (1994-1998), and as a field manager for the League of Conservation Voters (1981-1986) to protect our environment. Andrews holds a master's degree in governmental administration from the University of Pennsylvania (1992), and a bachelor's degree in political science from Bucknell University (1981). Andrews lives in Gaithersburg with his wife, Staci Daddona, and their son.

Why my candidacy matters:

I am the only candidate running for County Executive who accepts no campaign funds from the interest groups — developers, unions, corporations, PACs — with whom the County Executive negotiates on the public's behalf. Combined with my extensive experience in County government as a 16-year member of the County Council and the former director of the County's AmeriCorps program, my unique level of independence from interest groups enables me to always make decisions that are in the long-term interest of our County. I won't make back room deals regarding public land, as occurred with the Brickyard Road property. I won't agree to excessive pay and benefit increases to win endorsements of County unions, as has been the practice for years. And I will continue to take on powerful interest groups when the public interest requires it, as I did when I led the multi-year battle that reformed the County's abused disability retirement program, resisting and overcoming fierce pressure from the Fraternal Order of Police and other County unions to back down.

If we are going to continue to have the funds we need for important services and progressive programs while keeping taxes at levels that don't cause people to leave the County, we must have a County Executive who is effective at protecting Montgomery County from being used as an ATM in Annapolis, who says no when corporations and unions and other interest groups ask for too much, and who is committed to create a business climate, workforce, and transportation system that will grow jobs, especially green jobs, while protecting the environment. Please read my plan, "Securing our Future", describing in detail my vision for Montgomery County, which can be found on my website at www.philandrews.com 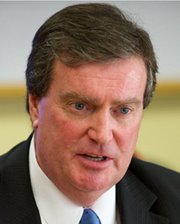 A Montgomery County native, Doug Duncan and his 12 siblings grew up in the Twinbrook neighborhood of Rockville, home to working class families. Duncan’s dad came to this country from France as a teenager, serving in World War II and at the NSA, and later teaching in the Montgomery County Public Schools ESOL program. His mom, Ellie, along with raising 13 children, worked at the Montgomery County Circuit Court and was a local Democratic activist.

Duncan graduated from Columbia University in three years to help his family save money so that his younger siblings could also afford to go to college. At age 26 he was elected to the Rockville City Council. After serving three terms, he ran for Mayor of Rockville where he would serve three terms. In 1994, Duncan ran for Montgomery County Executive in order to help lead the county he grew up in. He was elected to an unprecedented three terms as Montgomery County Executive.

Duncan has always stressed that providing a world-class education for everyone, particularly those communities that need the most help, is paramount and pays dividends. By investing heavily in early childhood education, reducing class size and hiring the best teachers, he knows that such a goal can be reached because as Montgomery County Executive he helped achieve it for thousands of students.

Duncan knows that creating an economic environment to attract the best, high earning jobs for families throughout the county is essential. Duncan helped make Montgomery County the economic engine for Maryland and added more than 85,000 jobs during his time in office through revitalizing downtown Silver Spring, building the Music Center at Strathmore, and creating the county’s business incubator program to name a few. And this economic growth occurred even while weathering two recessions during his tenure.

Montgomery County has changed quite a bit over Duncan’s lifetime. However, he knows that all residents still care about the same things: an excellent education for their children, a rewarding job that pays a good wage, and a community in which we can all spend more time enjoying each others’ company than in traffic.

He lives in Rockville with his wife of 33 years, Barbara, where they raised their five children: Michael, Andrew, John, Thomas and Conor. 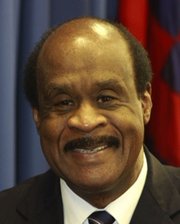 Our current County Executive, President of the County Executives of American, and a decorated Vietnam veteran, Ike Leggett, has built a record of public service marked by conviction to principle, leadership, and a willingness to take on tough fights and make hard choices.

He is currently in his second term as the County Executive. Leggett also served four terms as an At-Large Member (1986 - 2002), and served as the Council's President three times (1991, 1998, 1999) and as its Vice-President three times (1990, 1997 and 2002). As a Council Member, he chaired the Council's Transportation and Environment Committee and served on the Education Committee. Currently, he serves as President of the County Executives of America and is the incoming President of Maryland Association of Counties.

Leggett’s other political service includes chairing the Maryland Democratic Party from December 2002 - December 2004, which involved working with local officials throughout the State of Maryland.

In earlier leadership experience he served as a Captain in the United States Army, where his service in Vietnam War earned him the Bronze Star Medal, the Vietnam Service, and Vietnam Campaign Medals. As an administrative aide for Congressman Parren Mitchell of Maryland's 7th Congressional District, he focused on small business concerns.

In 1977, Leggett was selected as a White House Fellow, one of a small number of citizens selected from across the country for their exemplary civic, professional and educational achievement. He served as a Professor of Law at the Howard University Law School from 1975 – 2006, and ran the day-to-day operations of the Law School as its Assistant Dean from 1979 - 1986.

We are fortunate to live in one of the nation's best places to raise a family, obtain an education, earn a living, and build a business. Moving into the future, I will build on what is now a strong foundation, and working together, we will accomplish great things for our children, our families, our communities.

Of everything that we do to strengthen the County, the most important investment that we make is in our nearly 150,000 public school students. Although the public schools account for more than half of the entire County budget, they are the foundation for an infinitely larger share of the County's future.

That is why — even during the most challenging fiscal years — I have supported the Montgomery County Public Schools budget at nearly 100 percent of their budget request. And that is why we have provided additional resources for building new schools and modernizing existing schools.

Every dollar that we invest in education reaps a rich harvest of excellence — now and in the years to come.

When families think about moving to Montgomery County and when companies consider location options, they take notice of our 35 National Blue Ribbon schools. They also are aware that our SAT scores are 153 points above the national average combined score, and that we had 137 National Merit Scholar semifinalists last year.

Effective government begins with fiscal responsibility, with getting back to basics, and with a County government that pays its bills, lives within its means, and tells the truth about its finances. My administration has done just that.

County taxes as share of personal income has gone down 10 percent since I took over as County Executive.

I reversed unsustainable County government spending increases that totaled 42 percent in the four years before I took office — more than 10 percent every year under the previous administration.

During my first five years in office, there was zero growth in County government spending — despite an inflation rate of 8 percent and a 12 percent increase in County population. County spending actually decreased in 2011— the lowest rate of growth in 18 years. During my tenure, County government tax-supported spending has gone up an average of two percent per year, and over this eight-year period, I have closed nearly $3 billion in budget shortfalls. I accomplished this with hard choices and reducing the size of County government, including eliminating 10 percent of County government workforce positions from 2008 to 2011, reducing health and retirement benefits for County employees.

As a result of these difficult decisions, we are in a much better financial position today and as we move forward into the future.