Fear a Good Cause
Votes

Fear a Good Cause 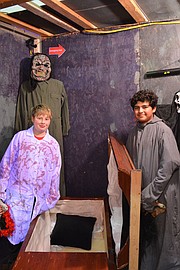 Gabe Jacome is terrified of haunted mazes. But when the Lake Braddock eighth grader literally ran into some of his friends working at the Interstate Haunted Maze, he decided to join the scare team.

“In the maze, I stand right in front of people and then jump out when they least expect it,” he said, decked out in a grey robe down to his ankles, with skeleton hands and a chilling ghoulish mask. “When I've really scared someone, it makes me laugh a lot.”

The maze wrapped up its second year at the Interstate Moving Relocation Logistics storage facility on Morrissette Drive in Springfield on Nov.1. Haymarket resident Eric Fierst works for Interstate and created the maze in 2001.

A LIFELONG FAN OF HALLOWEEN and scary movie buff, Fierst initially built the maze inside a moving trailer he would park in his own driveway. The trailer and maze came along as Fierst and his family moved to Minneapolis, St Louis and then Virginia in 2011. While in St Louis, they had around 1,000 trick-or-treaters come through the maze in 2010.

And as the event became more popular, he decided it could be more than just a maze.

“It grew from trying to entertain people for Halloween to, ‘Let's try to reach out and do something for the community.’ And that's where we started the canned food drive.”

Fierst’s home owners association in Haymarket wouldn’t allow him to run the maze in the driveway, so he approached Interstate with an idea: Why not partner with the Springfield-based charity ECHO (Ecumenical Community Helping Others) and hold the event at the Springfield Interstate facility?

ECHO supports people in short-term emergencies with food and money, and helps low-income earners with clothing and home essentials.

FOR 2013, Fierst set up his homemade house of horrors at Interstate for a single weekend around Halloween. The maze covers an enclosed 20 by 28-foot structure, with rest of the path comprising shipping containers. Walking takes up to six minutes.

The first year in its new location, Fierst and company collected about 1,000 pounds of food for ECHO. Encouraged by the turnout, and perhaps the tradition of neverending Halloween movie sequels, he decided to run the maze for two weekends in 2014: Oct. 24, 25, 31 and Nov. 1.

Irving Middle School eighth grader Nick Beck attended the maze in 2013, then asked if he could volunteer when he returned in 2014.

“It’s for a good cause,” he said. “I just wanted to help out, and I get some community service hours for my school.”

Volunteers from Lake Braddock, West Springfield High School and Irving helped construct the maze beginning in early October, with anywhere from 10 to 25 students committing several nights per week. Then they got to be the maze’s living (or dead) components.

Beck’s deranged clown costume was his own idea. “I'm just like a psycho clown killer guy,” he said. “I just got some fake blood and put it on a lab coat, and got a chainsaw.”

Beck was joined in the maze by Fierst’s children Brooke,6, and Blake,8.

“It’s a great touch, the mask with the princess dress,” said Fierst’s wife Loan, referring to Brooke. “The kids are completely into it; I sort of married into it, but it’s a family tradition now.”