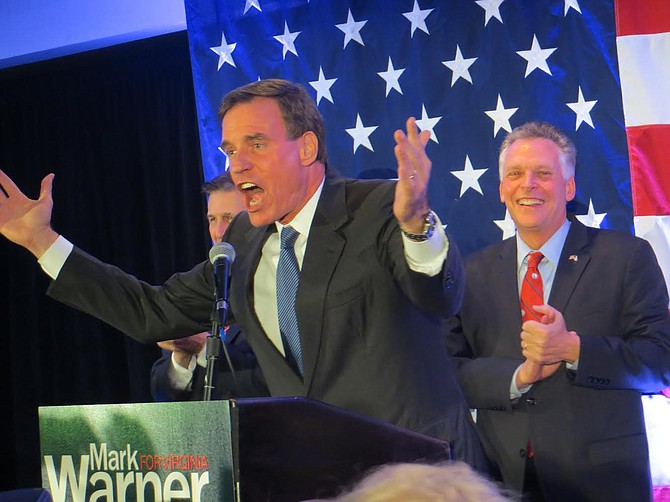 U.S. Sen. Mark Warner, with Don Beyer and Gov. Terry McAuliffe behind him, addresses the crowd on election night. Photo by Vernon Miles.

Despite the election still being too close to call, U.S. Sen. Mark Warner gave his supporters at the Doubletree Hotel in Crystal City a full smile and a victory speech. With less than 1 percent of the vote favoring Warner over his Republican challenger Ed Gillespie, the question is whether or not Gillespie will ask for a recount. But if this was troubling Warner as much as it was the Democrats gathered the night of Nov 4, he didn’t show it. 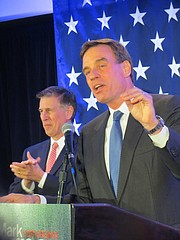 “We’ve still got work ahead of us, but I’ve come out of tonight’s election energized,” said Warner. “Let’s make sure we get our country headed back in the right direction.”

However, while it had all of the tones of a victory speech, at no point did Warner ever say that he had won. If this was a show of restraint, it was not shared by his colleague Tim Kaine, Virginia’s other senator and another former governor.

“The results are in and we’ve won,” said Kaine “Folks, we got this ... We held our own, we’re doing it right here in Virginia.”

Ninety-nine percent of Virginia’s voting precincts have reported their votes, and it shows Warner leading by 17,000 votes, approximately .8 percent. Gillespie can file a recount petition with the Circuit Court of the City of Richmond. Each precinct would recount their votes and send them to a recount court, who would then declare a winner. Following a recount, the loser can contest the findings in a joint session of the General Assembly.

While Warner still has the edge, the election isn’t fully over until Gillespie concedes or the recount and potentially the joint session are dismissed. Warner, however, was already addressing the campaign in the past tense.

“It’s been a hard fought race,” said Warner. “It went a little longer than we thought.”

While the race wasn’t expected to be this close, Mark Rozell, acting dean and professor of public policy at George Mason University, said the national trends that favored the Republicans in this election worked against Warner.

“An unpopular Democratic president, public discontent with incumbents, the usual midterm slide for the party in the White House all put Virginia in play,” said Rozell. “Also, Warner was a popular governor. People see him as an executive-style leader, not one of 100. The image he has cultivated doesn't fit the Senate so well as it did the governorship.”

William Schneider, also a professor of public policy at George Mason, agreed that the closeness of Warner’s race was largely a reflection of hostility toward President Obama.

“All politics is national,” said Schneider. “If a Democrat runs for dog-catcher, he’s still going to be accused of being an Obama clone. That national trend hit Virginia and made the election a lot closer than people had expected, but Warner’s apparent survival shows Virginia is still different from most other Southern states.” 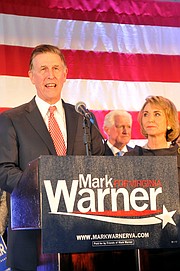 Meanwhile in the 8th District, Don Beyer claimed a victory early in the evening with 63 percent of the vote. With 127,981 votes, Beyer nearly doubled the votes of his closest competitor, Republican Micah Edmond.

“I will take this new responsibility as seriously as any person can,” said Beyer. “We live in challenging times … but there is no crisis before us we cannot master. All life asks of us is that we live it with courage.”

After his speech, Beyer laid out his immediate priorities in office.

“Biggest priority will be building relationships across party lines,” said Beyer. “I can’t get anything done when I’m the minority unless I can forge partnerships with folks on the other side. There’s a lot of things I want to do, but it all begins with having enough votes.”

“For a Democrat in that district, nomination is tantamount to election. No one thought Beyer would be seriously challenged,” said Rozell. “It confirms a longstanding pattern of heavy Democratic voting in this part of the state.”

But for some, it wasn’t Beyer’s victory that impressed them, but how he conducted his campaign.

“We’re thrilled that Beyer won; he worked like a maniac and never took anything for granted,” said Cynthia Steele Vance, a supporter at the Virginia Democratic victory party. “When people talk, Don Beyer really listens … It’s what makes him a good leader.”

Proposed Constitutional Amendment: Question: Shall Section 6-A of Article X (Taxation and Finance) of the Constitution of Virginia be amended to allow the General Assembly to exempt from taxation the real property of the surviving spouse of any member of the armed forces of the United States who was killed in action, where the surviving spouse occupies the real property as his or her principal place of residence and has not remarried?

City of Fairfax Advisory Referendum regarding length of term for Offices of Mayor, City Council and School Board, and whether the term of office should be increased from two years to four years.

* All results unofficial as reported morning of Wednesday, Nov. 5, 2014.