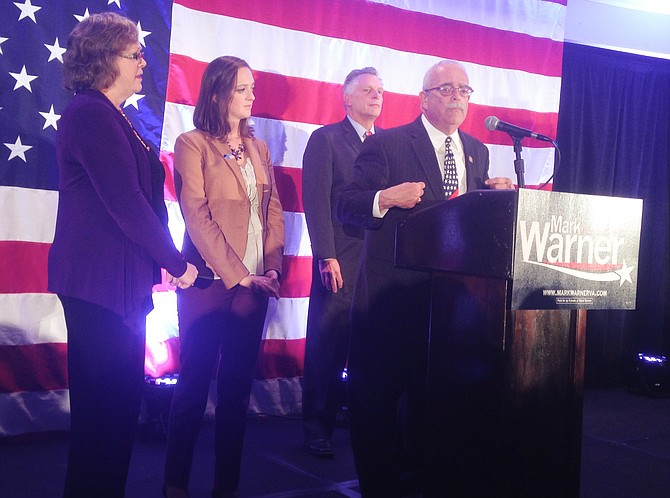 Congressman Gerry Connolly, flanked by his wife Cathy, his daughter Caitlin, and Virginia Governor Terry McAuliffe delivers his victory speech at a Democratic Election Night gathering in Arlington. Connolly was elected to a fourth term in the U.S. House of Representatives. It marked his 10th consecutive election victory. Photo contributed

As Huey Lewis and the News’ “Power of Love” poppy ballad led a soundtrack infused with ’80s pop and modern country music, the mood at the DoubleTree Crystal City hotel in Arlington ebbed and flowed between elated cheers and frustrated boos. 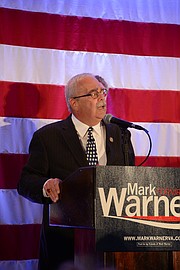 Connolly defeated Republican Suzanne Scholte to secure a fourth term in the House of Representatives.

Supporters, families and campaign staff of democratic candidates Mark Warner, Gerry Connolly and Don Beyer packed the rectangular event hall on Nov. 4. Two massive projection screens on either side of the main stage depicted race results from around the country, gradually revealing the outcome that republicans had gained control of the Senate.

VICTORIES in the flesh answered the blow to democratic dominance. An impassioned Congressman Jim Moran started the evening introducing Don Beyer, who won the 8th District representative seat with 62.95 percent of the votes, according to the Virginia Public Access Project (vpap.org).

“Regardless of what may happen tonight, we don't know what the composition of the senate is going to be,” said Moran.

While the onlookers and multimedia journalists from around Virginia hung on every tenth of a percentage point update in the Mark Warner-Ed Gillespie race, incumbent congressman Gerry Connolly gave the blue population another reason to cheer.

“It is a great feeling,” he said after accepting the podium from Virginia Governor Terry McAuliffe, “to be able to say for the fourth time, I get to represent the wonderful people of the 11th district of Virginia.”

Though republican challenger Suzanne Scholte hung around in the early reports of voting returns, Connolly won comfortably with 56.77 percent of the vote to Scholte’s 40.30 percent, according to VPAP.

In Fairfax County, the unofficial returns showed Connolly receiving 82,034 votes and Scholte with 60,133. Libertarian candidate Marc Harrold garnered 2,605 and Green candidate Joe Galdo received 1,405. Scholte planned to hold a party at the Embassy Suites Springfield. She didn’t respond to a request to comment.

CONNOLLY ECHOED Moran’s acknowledgement of the Senate turnover, but alluded to hope for a Warner win.

“It may be a long night,” he said, “but we're going to have another victory at this podium.”

The re-elected congressman then addressed the need for more unity, across the board. “We're a divided country,” said Connolly. “It's not just Congress that's divided; our communities are divided, our states are divided, and that's because we share some values and we differ in a lot of others. The elections are always about contrasts and choices.”

In an interview after his speech, Connolly said he believes he was running more against a “climate than an opponent,” one which he said was full of contrasts.

“Do we believe it's a woman's right to make choices about her own body or not?” his speech continued. “Do we think we need to revamp the immigration system in America and make it fair for everyone or not? Do we believe in global climate change or not? Because if the answer is yes to those and many other questions, then actually we have a responsibility to do something about it.”

Delegate Mark Sickles was among numerous elected officials and staffers in the crowd. “Gerry was real strong, and it's been a tougher year for democrats,” he said. “He's working hard for our region and I’m just thrilled for him really.”

Connolly candidly remarked after his speech, “Hubert Humphrey once said, ‘Defeat, like victory, is a passing phenomenon in politics.’ You have to have that perspective.”

Warner and Gillespie were still less than one point apart by the end of the event, with Warner clinging to a paper-thin lead. He declared victory, though Gillespie didn’t concede the race.