Marie Elizabeth Krafft, the Martin A. Schwartz Professor of Chemistry and Biochemistry at Florida State University, 58, of Tallahassee, Fla, died Nov. 9, 2014 after a two-year long struggle with brain cancer. 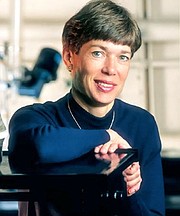 Daughter of Frank J. Krafft and the late Pauline B. Krafft, Marie grew up in Alexandria. She attended Blessed Sacrament Elementary School, T. C. Williams High School, and Northern Virginia Community College before attending Virginia Polytechnic Institute and State University (Virginia Tech), where she earned her B.S., M.S. and Ph.D. degrees in chemistry. Subsequently, she was a postdoctoral associate with Professor Gilbert Stork at Columbia University.

While at Virginia Tech, Marie met and later married the love of her life, Dr. Robert A. Holton. Robert and Marie have a son, Paul Evan Holton, and Robert has two sons, Robert L. Holton and David J. Holton, from a previous marriage.

Marie handled her disease with incredible bravery. Well beyond her expected survival time she could be found on the slopes at Beaver Creek, Colo., ducking under the ropes to catch the last chairlift while the rest of her family had long-ago retired for the day. She spoke about her condition with a composure and openness that put those around her at ease and made them feel closer to her.

The service for Marie will be held Thursday, Nov. 13, 2014 at 11a.m. at Faith Presbyterian Church. The burial will follow at 2 p.m. at MeadowWood Memorial Park (700 Timberlane Rd, Tallahassee). Susie Mozolic of Bevis Funeral Home is assisting the family with their arrangements (www.bevisfh.com or 850-385-2193).