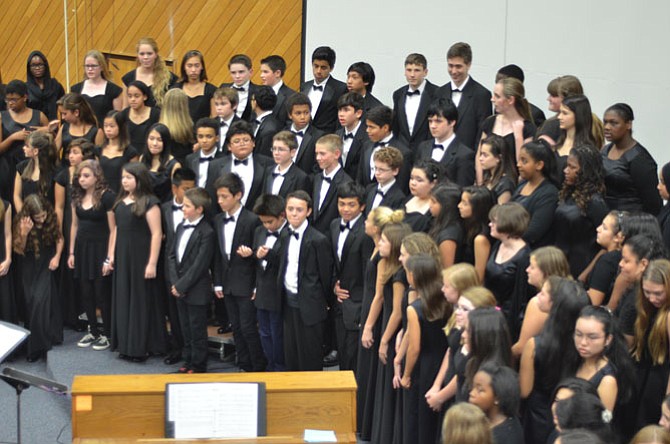 Students prepare for the fall chorus concert at Reston Langston Hughes Middle School. Students as well as parents were pleased with the fall concert performance. Photo by Ryan Dunn.

Parents and family members had the opportunity to hear the young talent of students at Reston Langston Hughes Middle School at the October fall concerts. On Wednesday, Oct. 29, school chorus director Sarah Stanley led a performance of seventh and eighth grade students. The next evening, Thursday, Oct. 30, there was a fall orchestra concert.

Chorus director Sarah Stanley began the chorus concert with “The Star-Spangled Banner,” performed by the combined choirs. More than 100 middle school students performed at the fall chorus show. “Hughes is proud to showcase the dedication and hard work of our musicians and directors to the families,” said Principal Aimee L. Monticchio. “We believe the arts add joy and beauty to the lives of those who play and those who listen.”

CHORUS DIRECTOR Sarah Stanley is familiar with Reston as she studied at Hunters Woods Elementary, Langston Hughes Middle and South Lakes High School. “When the position at Hughes opened up, I jumped at the chance to teach at my alma mater,” stated Stanley. “I am so loyal to Reston and believe in the people and the schools here. I feel so blessed to be able to teach in a community that has given so much to me and has made me who I am,” Stanley said.

“I could not be more thrilled with my student’s performance,” said Stanley. “Each of these students has worked so hard and is learning so much and I am very proud of them. We have only been in school for nine weeks and the music we were able to produce on Wednesday was quite impressive given the short amount of time.” Currently there are 106 students in chorus. “I am looking forward to seeing the program grow even more over the years,” said Stanley.

Reston Langston Hughes Middle School beginning women’s chorus performed at the October fall concert held at the school. The chorus show was free and open to the public.

Students as well as parents were pleased with the fall concert performance. “I thought the kids sounded very polished, especially the advanced chorus,” said Reston resident Neil Kirr, who attended to hear his daughter Delaney sing. “It is a whole lot of fun, Ms. Stanley is an awesome choral director,” said seventh grade student Corrine Wellman. “I think the kids did a fantastic job,” said Reston resident and parent Jackie Gregory. “The kids are doing so well.”

“Ms. Stanely is really nice, she understands us,” said seventh grade student Danielle Yakubisin. Songs included in the concert program were Mark Patterson’s “Come Sail Away With Me” and “Some Nights” which included choreography. The show concluded with a performance of the song “Say Something”, which won a vote to be included in the concert. Soloists in the show included students Delaney Kirr, Caroline Weis, Louisa Mattozzi, Lauren Skinner, Camille Denny, Joshua Meade and Ulices Sanchez.

AS A MUSIC EDUCATOR, Stanley believes in the importance of training “musicians” not only “singers.” “These students are learning the fundamentals of musicianship,” said Stanley. “Every day we learn theoretical concepts and practice our sight reading skills. These students can read and write music as well as sing it and I think that is the mark of a true musician. I hold each of my students to very high expectations and I saw the results of that on Wednesday.” Stanely and other parents look forwards to the next school concert on Dec. 9. “The sky is truly the limit for these amazing middle school students,” said Stanley.