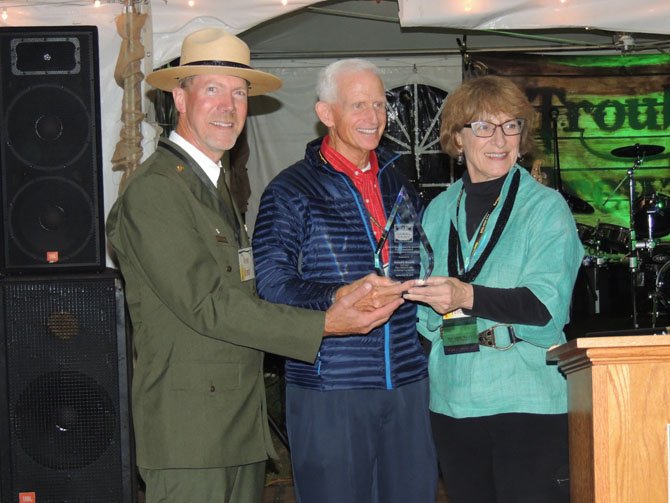 Kevin Brandt and MJ Veverka give the Stewardship Award to Richard Marriot. Photo by Susan Belford. 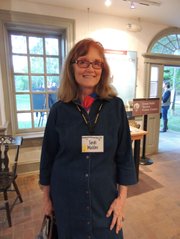 As the crowd entered the Historic Great Falls Tavern on a balmy September evening, they were greeted by park rangers Mike Griffin and Ned Noddard showing off a bright red 1952 Chevy truck. Since the event celebrated the 60th anniversary of Chief Justice William O. Douglas’s walk of the entire 184.5 mile C&O Canal with editors from the Washington Post, a life-like photo of Douglas provided photo opportunities for attendees. The Canal mules, a roaring bonfire, plenty of grog, chili and corn bread and music by “Trouble Brewin” set the mood for the 4th annual Park After Dark celebration and fund-raiser.

The “Pot for Potholes” brimmed with donations for the Towpath resurfacing joint stewardship program between the C&O Canal Trust and the C&O Canal National Historical Park. This money will fund the Towpath Crew’s repairs to the towpath, including both small potholes and major wash-outs like the Clear Spring breach. These repairs cost approximately $5,000 to fund for one week or work. The goal was to raise $60,000.

Chief Justice Douglas’s widow, Cathy Douglas Stone, shared that coming back to the event was a “sentimental journey” for her. “Bill would walk on the canal every weekend and often he would come down here when he wanted to mull over some complex matters,” she said. “This is the people’s park and I have wonderful memories of the time we spent here.”

Richard Marriott was presented with the Stewardship Award for his continued support of the Canal Trust. “I have traveled all over Europe and the world, but there is no more beautiful place than this C&O Canal. I walk and bike on the towpath daily when I am in town. I am pleased that I can help preserve this fabulous national asset and keep it safe for all who use it.”

First-time Park After Dark guest Sarah Madden was thrilled to be there. “My uncle Merlo Pusey was the historical editor for the Washington Post,” she said. “He wrote an editorial in favor of building a national highway from Georgetown to Harper’s Ferry. However, after seeing Douglas’s letter challenging the editors to join him in walking the entire canal – and then joining the walk, he did a complete about-face in his views, and wrote a second editorial supporting turning the C&O Canal into protected land and denouncing the building of a highway.” She also chatted with Cathy Douglas Stone who told her when Justice Douglas and Uncle Merlo went on the historic walk, that Douglas helped Uncle Merlo bandage his many blisters . Her Uncle Merlo was not a hiker; as a “desk jockey” he spent many hours hunched over his typewriter writing.

Later in the evening, guests enjoyed dancing to the band, toasting marshmallows over the bonfire and walking to their cars on a moonlit night.