Event to commemorate 60th anniversary of Douglas’ 1954 walk to save the canal.

Guests at last year’s Park After Dark enjoy a roaring bonfire. This year’s event is schedule for Sept. 20.

Last year’s Park After Dark brought people to their feet. 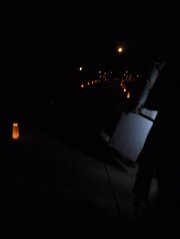 Candles light the way to the Great Falls Tavern during last year’s event.

A scenic venue for the Park After Dark event.

The 4th annual Park After Dark fundraising event will take place on Saturday, Sept. 20 at the Historic Great Falls Tavern.

Douglas spearheaded a movement against a bill in Congress to destroy the C&O Canal to build a super-highway. He wanted to preserve the C&O Canal — the 185 miles of parkland as well as the land along the Potomac with its vast views of the river and of Virginia, and protect the towpath that ran from Georgetown to Cumberland. He was aghast when Congress was considering a bill to turn the towpath into a highway in order for more people to enjoy the beauty and scenery — from their cars as they were speeding by. In 1954, he challenged the editors and journalists from The Washington Post to hike the 185 miles with him.

He said, “I wish the man who wrote your editorial of January 3, 1954, approving the parkway would take time off and come with me. We would go with packs on our backs and walk the 185 miles to Cumberland. I feel that if your editor came, he would return a new man and use the power of your great editorial page to help keep this sanctuary untouched. One who walked the canal its full length could plead that cause with the eloquence of a John Muir. He would get to know muskrats, badgers, and fox; he would hear the roar of wind in thickets; He would see strange islands and promontories through the fantasy of fog; he would discover the glory there is in the first flower of spring, the glory there is even in a blade of grass; the whistling wings of ducks would make silence have new values for him. Certain it is that he could never acquire that understanding going 60, or even 25, miles an hour.”

This is the 60th anniversary of Douglas’ 1954 walk to save the canal – and he is being remembered at this year’s Park After Dark fundraising event for his dedication to the environment, the value he placed on conservation and his willingness to go up against Congress for his belief that the Canal would bring pleasure and enjoyment to U.S. citizens into perpetuity.

Douglas loved the canal and regularly hiked 15-20 miles each weekend. He wrote in The Washington Post: “This stretch … is one of the most fascinating and picturesque in the Nation …. It is a refuge, a place of retreat, a long stretch of quiet and peace … a wilderness area where we can commune with God and nature … a place not yet marred by the roar of wheels and the sound of horns ….”

The editors accepted his challenge and by the time the group left, it numbered 58. As the hike progressed, one man's effort to save a piece of wilderness became a major news story. Wire services spread word of the hike to thousands of newspapers across the country. Time magazine ran a story. Movie theaters showed a newsreel of the hike. Reporters conducted interviews with Douglas as he walked. Photographers captured the hike on film. People came out to hike with him. School children and townspeople shouted their support as the group passed by their towns. Support grew in favor of saving the canal. After seeing and experiencing nature up close and personal, the editors of the Washington Post reversed their positions and supported canal preservation. And the members of Congress did not pass the bill.

The 4th annual “Park After Dark” fundraising event will take place on Saturday, Sept. 20, from 6-10 p.m. at the Historic Great Falls Tavern, 11710 MacArthur Boulevard, Potomac. This “one-of-a-kind” event will feature live music from the modern country band, Trouble Brewin’, chili with delicious accompaniments, delectable desserts, a visit from the canal’s mules, and a roaring bonfire. The attire for the evening is “Towpath Chic.” The theme will be highlighted with 1950s touches, including a 1950s era car for photo opportunities and a variety of ‘50s era hiking equipment — cameras, back-packs, thermoses, binoculars, etc. to try on in the photo booth area. Canal Trust Board Chair MJ Veverka said, "Park After Dark is a fun evening in support of the park, with great food, lively entertainment, and socializing with friends. This year we will celebrate William O Douglas' walk to save the park, adding our part to continue the important work he started. This is a fun way to provide needed resources to care for and improve our backyard park."

Both live auctions and silent auctions will be held. Some of the auction items include tickets for four to the White House Christmas tree lighting, tickets for four to a Wizards game with court-side seats, a prayer chest from Tibet, brought home from a diplomatic trip, gift baskets from many of the canal towns, a “Behind-the-Scenes Tour” for 10 at the Newseum, a goose-hunting trip on the eastern shore, gift certificates to restaurants, hotels and spas and framed artwork and photos of the C&O Canal. The auctions will raise money for “Towpath Forever,” the park initiative to maintain the C&O Canal National Historical Park for future generations. There will also be a "Fill the Pot for Potholes" campaign to help the park repair potholes along the towpath.

“The highlight of the first three Park After Dark evenings for me has been time with family and friends at Great Falls Tavern, enjoying the beauty of the place and the knowledge that we are all supporting one of the jewels of the National Park system,” Canal Trust Board Vice-Chairman Michael Mitchell said. “I support the Trust because it is a way for me to give back to the park where I have spent so many enjoyable hours over the years. It also is a way to create a sense of legacy through the Trust and Park Service partnership to steward the park for future generations. And it is just a chance to hang out with really cool people who have a shared interest in history and nature and fun in the out-of-doors, all of which the park offers in abundance.”

For more information, to purchase individual tickets or to sign up for a sponsorship, go to www.canaltrust.org.