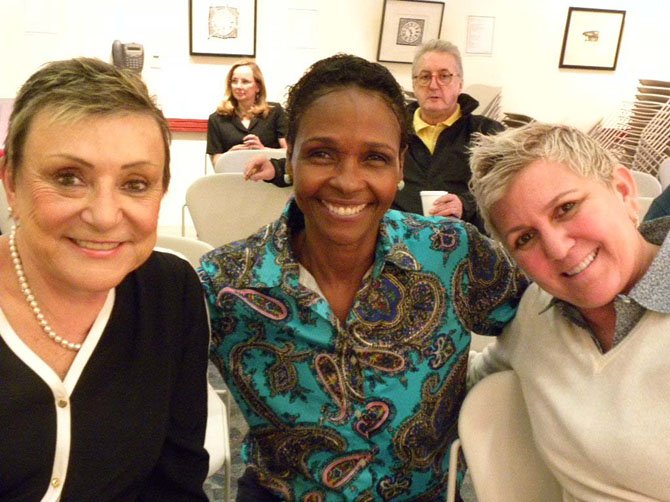 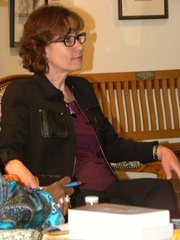 More than 30 people attended the first Great Falls Speaker’s Series at Great Falls Library on Tuesday, Sept. 23 to hear author and Herndon resident Pamela Palmer read from the latest book in her Feral Warrior series — “Wulfe Untamed” — and to learn about her storytelling process in a question-and-answer discussion.

The lecture was attended by writers — such as Great Falls author Clarence Ashley, who wrote “CIA Spymaster: George Kisevalter” — members of the Great Falls Writer’s Group and the community.

Palmer drew inspiration from Great Falls Park in writing the Feral Warrior series— nine books about shapeshifters who live in a mansion in Great Falls. “There’s such a wildness about it,” she said. The first scene in the first book of the series, ‘Desire Untamed,’ even takes place amongst the rocks in the park.

“When I drive by the park, I see [the characters] sometimes because they live there.” She said her fans have expressed a desire to visit Great Falls, thinking it would be the most magical place on earth.

Palmer’s path to publication took more than a decade to achieve. She worked as an engineer for IBM but had always been a storyteller and a dreamer, till one day one of her ideas got too big and she had to write it down.

But she had a lot to learn about writing. By coincidence, the Chantilly Regional Library opened in 1995, around the time she got her big idea. She picked up writing books that discussed the writing process. If the Chantilly library had not opened, she said that she might never have developed as a writer.

Michael Cappitelli, of Reston, said that Palmer’s lecture gave him ideas on how to improve his writing, especially the importance of setting the scene and not getting caught up in what words to put on paper. Palmer wanted to teach the audience and she sensed that they wanted to learn, he said.

Palmer also reinforced the importance of having writers talk about their work with other writers. “Being open to critique helps you write and not be afraid,” said writer’s group member Nancy Hannan.

Kristin Clark Taylor, founder of the Great Falls Writer’s Group, wanted to tap into the writing and creativity that she knew existed in Great Falls. Since the first meeting last year, she said that the group has become a “writing family.”

The Speaker’s Series emerged from meetings of the group. Taylor would bring in authors and writers during the second meeting of the month and realized that there was a “tremendous outpouring of curiosity and energy” after guest speakers came.

She presented the speaker’s series as an event open to the community to Great Falls Library branch manager Daniela Dixon. “The library likes to support community efforts and anything having to do with writing and books,” said Dixon.

The next Speaker’s series will be on Oct. 23 and will feature New York Times bestselling author Susan Coll.