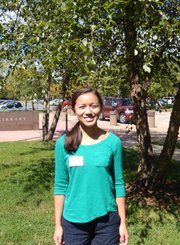 Vienna’s Megan Do outside the Chantilly Regional Library where she was honored for a poem she wrote.

Megan Do just writes poetry in her spare time — and as a junior as Thomas Jefferson High School for Science and Technology, she has precious little of it. Yet one of her recent efforts won second place for poetry in a competition sponsored by the Writers of Chantilly.

The 16-year-old Vienna resident participated in the group’s Second Annual Student Writing Contest. And she and the other winners in both prose and poetry were honored Sept. 7, in a ceremony at the Chantilly Regional Library.

“I was pleased to win,” said Do, daughter of Thu and Anh Do and sister of Nathan, 14, and Grace, 11. “When I entered, I had no idea what they were looking for; I write about whatever strikes me.”

The Writers of Chantilly, a nonprofit organization of local professional and aspiring writers, received more than 175 stories, essays and poems from Fairfax County middle- and high-school students. The six winning entries — three each in poetry and prose — will be published later this year in an upcoming anthology called “Unfinished Business.”

During the awards ceremony, the winning students read their work aloud. Do didn’t title her poem, but it was packed with powerful feelings. She wrote about a girl who gets pregnant and drops out of school to raise her child. But instead, she has a miscarriage and leaves the hospital with “nothing but scar tissue and a bill.”

In the poem, the girl can no longer have children of her own, but she later adopts a child to fulfill the need in her to become a mother. She then goes back to school and has to start over, so she has to deal with unfinished business.”

“It’s not based on anyone in particular, but that theme resonated with me,” said Do. “I normally write about conflicts I feel empathetic about or sympathetic toward. An example would be school and the downside of the education system. Being at T.J. is very competitive and that’s kind of draining. A lot of people are really stressed and end up dropping out.”

So far, she said, she’s handling the pressure “fairly well.” And she’s looking forward to taking a neuroscience lab in her senior year. “I’d like to eventually go into scientific research or become a doctor,” said Do. “I’m really interested in neurological diseases and cures for things such as Alzheimer’s and depression.”

As for her poem, once she decided on the idea, she said, “I just wrote it all out. I’m really selective about the things I write about — I have to like the subject. A friend of mine who does a lot of writing competitions told me about this contest, so I entered. I was excited to win and I’m really honored.”