Chantilly — Two local girls were among those honored Sunday for their entries in a Grandparents Day writing contest. They are Chantilly High freshman Saru Kalva, who won first place, and Chantilly resident Rashel Bajaj, a Thomas Jefferson High freshman who came in third.

The Writers of Chantilly, a local group of professional and aspiring writers, sponsored the competition, which was held over the summer. Students wrote about their grandparents, and the winners were recognized and read their works during a Sept. 8 ceremony at the Chantilly Regional Library.

For their efforts, Kalva and Bajaj received certificates and a prize package including a Barnes & Noble gift card. They’ll also have their entries published in an upcoming Writers of Chantilly (WOC) anthology.

Kalva, who enjoys computer science, reading, biking and writing spontaneous dialogue, wrote a poem about her grandparents, but dedicated it to her 90-year-old grandmother in India. Called “The Best Memories,” it was about some time that she and her grandparents spent there together. Kalva described the sights and sounds of a particular day and told how that visit brought her closer to her grandparents. 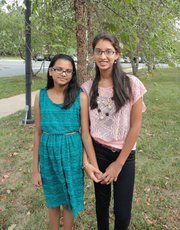 From left are honored writers Saru Kalva and Rashel Bajaj.

“What I like about writing is that each person expresses themselves in a unique way,” she said. “And the power of voice is so great that, if an author does it right, you can tell they wrote a particular piece.” Regarding her first-place finish in this competition, she said, “I was really surprised; I didn’t expect that.”

As a seventh-grader at Rocky Run Middle, Bajaj was part of a four-girl eCybermission team that captured second place in a statewide contest for its project on biometrics. Now at T.J., she’s an avid reader and writer and tutors fellow students.

Her essay was titled, “A Beautiful Legacy Fabricated by My Soul, My Grandparents.” In it, she described how close she is to her grandparents, even though they live far away in India. She wrote how they’re always there to help her and said “every family is a circle of love.”

Noting how her grandparents inspired her, Bajaj wrote, “Through their guidance, I’ll be a shining star.” But most importantly, she wrote, they taught her by their everyday actions how to help and be kind to others.

“I enjoy writing because it’s so free and allows you to express yourself,” she said after the ceremony. “It’s really personal, so this piece was a different kind of writing for me because I usually write things for school.”

“I also didn’t realize I’d be sharing this [in public],” continued Bajaj. “And I was tearing up as I read it because I realized how much I missed my grandparents, and I wanted this to be a memorable tribute to them. But I felt like I made their impact lasting and final because this will be published and I have documented their life in mine.”

She was also happy Sunday for another reason. “Saru and I are best friends, but we didn’t know each other was doing this contest,” said Bajaj. “So it’s really nice that we both won.”

Also during the event, WOC members read selections from their most recent book, “Nana … and Other Grandmothers.” The group meets twice monthly at the Chantilly Regional Library to encourage and support writers at all levels, and newcomers are welcome.

WOC has published several story collections over the last 11 years. “Nana … and Other Grandmothers” is available on Amazon.com or via the Fairfax County Public Library system. For more information, go to http://writersofchantilly.blogspot.com or contact wocruthbox@gmail.com.