Seeing Red and Blue with Connolly 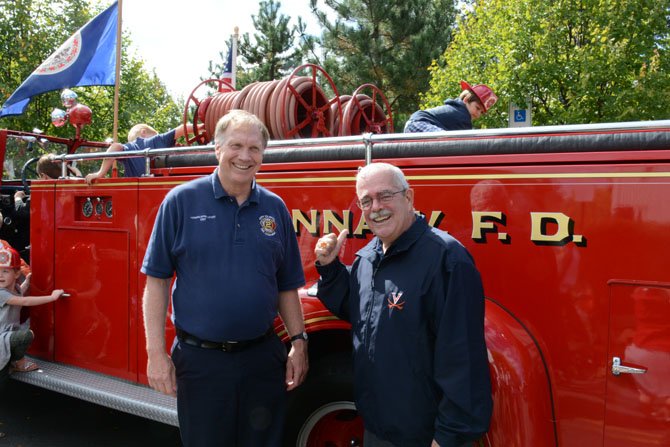 Howard Springsteen (left) of the Vienna Town Council and U.S. Rep. Gerry Connolly (right) hand out plastic fire helmets in front of a 1946 fire truck at the Oct. 4 Oktoberfest in Vienna. Photo by Tim Peterson.

Q: What do you think are your top three accomplishments in office?

A: * The Silver Line. I wasn’t alone, but I'm very proud of my championship of the Silver Line and the fact that it's up and running and succeeding. It took 19 years to sort of get people to reimagine it and get it built. It was a long, tough struggle.

Q: If you’re re-elected, what be would your top three priorities?

A: * I’m going to continue to push my FITARA (Federal Information Technology Acquisition Reform Act) bill until we succeed.

Q: Give our readers three reasons they should vote for you on election day.

A: * I get things done. I'm not somebody who rests on promises. I've got a record.

Q: How would you show off northern Virginia to an out-of-town friend?

A: The four new stations on the Silver Line in Tysons. Or the Mosaic District, to eat in one of the restaurants there. Or Reston, it’s such a vibrant community with lots of good restaurants there as well. I also like taking people to our historic locations, Mount Vernon, Gunston Hall or Civil War battlefields.

A: I spent 20 years in the private sector in IT, working for two companies. They were both federal contractors in IT and defense and life sciences, broad spectrum. It gave me a great perspective when I look at contracting issues.

Q: Who are some of your heroes?

A: * Saint Thomas More, Chancellor of England under Henry VIII, sacrificed his life rather than give in to the idea that Henry could break with Rome and become the head of the Church of England. He’s a model of great courage and principle.

Q: How do you relax, off the campaign trail?

A: When I had time, I used to do Civil War tours with Ed Bearrs, who’s now in his 90s. I love to read. And get together with friends for intimate dinners. Once a year, I go up to my native New England, visiting with my family in Cape Cod.

Gerry Connolly doesn’t have 20/20 vision. His round wire-framed spectacles and cropped salt-and-pepper mustache have long accessorized his look, whether sporting a black pinstripe suit or a billowy navy University of Virginia windbreaker (his daughter Caitlin Rose is an alumna).

But when the Star-Texaco storage facility at the Pickett Road tank farm started leaking oil that seeped into groundwater near his Mantua home, he could see with great clarity something needed to be done.

“It was quite a drama,” said Fairfax County Board of Supervisors chairman and then-Braddock Supervisor Sharon Bulova. Bulova got to know Connolly in his capacity as president of the Mantua Citizens Association. “Gerry was magnificent in going to bat for his community. He was a calm, strong voice during that time.”

That was nearly two decades ago, before Connolly’s career in public office began in 1995 when he was elected Providence District supervisor on the Fairfax County Board of Supervisors. In 1999 no one opposed him for re-election and in 2003 he became chairman. He was re-elected in 2007, before being elected to Congress the first time in November 2008.

“He’s a pretty quick study of problems,” said state Sen. Richard Saslaw (D-35). “He’s a pretty bright guy, but the experience accounts for a fair amount of that. There’s not many problems he hasn’t seen.”

Friends and colleagues who’ve known and worked with him over these years say it’s his vision that drives his service-oriented work. He can see a finish line and methodically goes about reaching it.

“Gerry’s not afraid to go out on a limb for something that he thinks is right,” said Bill Bouie, chairman of the Fairfax County Park Authority Board and longtime friend of Connolly. “He’s a guy of true conviction.”

Bouie and Connolly each attended seminary earlier in life, and each ended up pursuing a different sort of public service.

“HE’S GOT A PASSION for parks,” said Bouie. “He uses our parks and trails. He’s the father of the Cross County trail. It was his vision to connect the entire county.”

More than the parks and rec centers, Bouie said a needs assessment found trails were the Park Authority’s most in-demand amenity. The full trail now touches every magisterial district in the county, “which is no easy feat,” said Bouie.

“Gerry, along with the trail advocates, heard that message loud and clear. He went into action to make sure we were able to provide such an amenity.”

Another, more expansive, example of what Bulova said is Connolly’s “commitment to getting things done” is the first phase completion of the $5.6 billion Metro Silver Line rail extension.

“WITHOUT HIM we wouldn’t be here today,” said Richard Sarles, Metro’s CEO and general manager, at the July 26 ribbon-cutting in Reston.

Bringing the vision of the new rail to life was a lengthy process, spanning Connolly’s time as an elected official, across various levels of government.

“There was period of time when the project was in danger of falling apart again because of funding issues and discord on the [Metropolitan Washington Airports Authority] board,” said Bulova. “Gerry moved the Silver Line forward during a really rocky time.”

“I had real clarity,” said Connolly, “I can't imagine our future without it. We have to have this. I think it’s a transformative investment that’s going to change the Dulles corridor and anchor this part of northern Virginia to the core of Metro. That's absolutely essential for our economic future.”

He didn’t do it alone, but what colleagues describe as his “personable” and appropriately “light-hearted” and “serious” demeanor helped him engage across party lines and public offices.

“He had a lot of interaction with Secretary [of Transportation Ray] Lahood and Congressman Wolf, in bipartisan fashion,” said Eileen Filler-Corn, Virginia House delegate from the 41st district. “Just focusing on trying to reduce the cost.”

Working together with Lahood, Wolf, 8th District representative Jim Moran and senators Warner and Kaine, Connolly and company secured a $1.9 billion TIFIA (Transportation Infrastructure Finance and Innovation Act) loan from the Department of Transportation for the second phase of the Silver Line.

“My philosophy about being in this job is making a difference,” Connolly said, “getting something done for people, for my community.”

“Most people know him by name. He’s the epitome of a representative.”

Del. Mark Keam (D-35) jokingly said Connolly’s constant presence around his district makes constituents “spoiled.” “I see him probably one to two times per week,” said Keam. “Most people know him by name. He’s the epitome of a representative.”

Part of Connolly’s vision philosophy derives from the WWII-era Lutheran minister and theologian Dietrich Bonhoeffer. The minister died in a Nazi prison, having challenged the conviction of a collapsing arts, academic and religious establishment.

“How passionately do you believe in what you say you believe?” said Connolly. “He had clarity about that in a very difficult time. It took a lot of courage and he gave his life for it. That was a profound insight to me.”

THOUGH HE DIDN’T ENTER the clergy, Connolly made humanitarian work an early priority in his time on the Board of Supervisors, committing to end homelessness in Fairfax County. He led the adoption of a homeless coordinator and housing initiative, part of a systematic policy.

Louis Crandell was a Fairfax County waste water lab tech before a work-related fall left him with frontal lobe brain damage, living on disability compensation. Crandell spiraled downward with substance abuse after charges filed against him in North Carolina cost him his benefits. He found himself living in a tent in the woods.

“I tell you, it was like magic,” said Crandell. “It’s a direct result of Mr. Connolly that I’m not on that forest floor right now.”

Connolly and his constituent services staff investigated Crandell’s charges (which were ultimately dropped) and insurance situation, and helped Crandell find another job and subsidized housing. Crandell now volunteers with FACETS and at First Baptist Church on Braddock Road.

“He was so pleased with this whole set of initiatives that bettered his life,” said Connolly, “that came into our office and framed it as ‘I am a walking advertisement for all you were advocating.’ It works.”