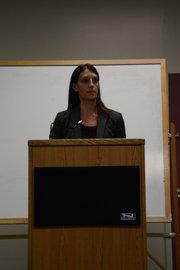 Mona Andrews, chief investigator with the District of Columbia Office of Police Complaints, speaks to the Citizens Coalition for Police Accountability at an Oct. 6 meeting in Sherwood Regional Library.

Louis Meyers with the Citizens Coalition for Police Accountability (CCPA) opened the group’s Oct. 6 meeting by saying, “We’re privileged to have a very good police department.”

He followed that by citing the dozen civilians killed by Fairfax County Police over the last several years. The fact that those events have come and gone with little or no explanation released by the police set up some of the CCPA’s central questions:

“Can the police truly be expected to police themselves?” Meyers said. “Can we have a partnership with police?”

The CCPA is continuing to petition the Fairfax County Board of Supervisors to appoint a citizens’ police advisory board to join the ranks of the 67 other county advisory boards or commissions.

The evening’s guest speaker was Mona Andrews, chief investigator with the District of Columbia Office of Police Complaints.

Andrews spoke about her office, as well as other models for civilian review boards in jurisdictions around the country. In some cases the citizens’ board investigates complaints themselves and then makes recommendations to their city council or supervisors, while in others they audit or monitor police internal affairs directly.

Though other areas, including D.C., have found success with one model or the other, Andrews cautioned that one size doesn’t fit all, that it’s worth taking the time to set up a board that’s tailored to the situation.

In Fairfax County that may mean some of column A and column B; however the message from Meyers was they first need to get the Board of Supervisors on board.

For more information on the CCPA, visit www.virginiaccpa.com.