Letter to the Editor
Votes 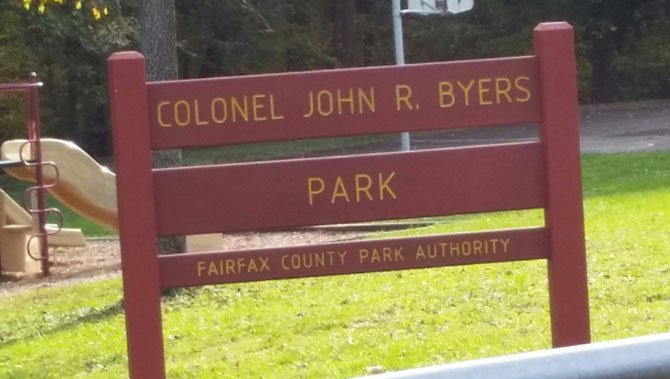 When retired Col. John R. Byers passed away in July 2012, I suggested to the Fairfax County Park Authority (FCPA) that the Williamsburg North Park on Collingwood Road be renamed in his honor. He lived in the neighborhood and walked by the park on a daily basis. This week while driving past the park, I was delighted to see that a new sign (see accompanying photo) has been placed renaming the park in his honor. The process of renaming the park was lengthy. With Supervisor Gerry Hyland's support and the unanimous support of the Planning Commission, the FCPA Board approved the renaming.

No one could be more deserving of such an honor as was Col. Byers. There is not enough space in the Gazette to reproduce his obituary. He was a 1951 graduate of West Point and served over 30 years in the Army in three wars. He won numerous military decorations. In our community he served four decades on the MVCCA's Planning & Zoning Committee and was Mount Vernon's Planning Commissioner for 21 years, 10 of them as vice-chairman. In that role, he played a part in numerous decisions concerning local parks. He led the effort to build Mount Vernon Hospital and played a key role in transforming the former Lorton Prison into the community that exists and thrives today with residences, schools, an art center and a championship golf course. He was a member of every Area Plan Review Task Force for the Mount Vernon District and was chairman of the Land Use Committee of Supervisor Hyland's Visioning Task Force. He was named MVCCA citizen of the year in 1994 and was named Lord Fairfax in 1997.

At the time of his death just short of his 86th birthday, he was actively serving on six county boards and authorities. His efforts in the civic community over four decades have left a lasting legacy that his neighbors see every day. I hope a dedication ceremony will soon occur where the legacy of Col. John R. Byers can be celebrated one more time.