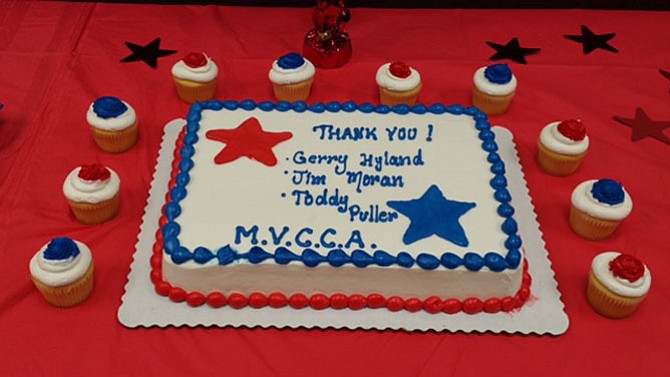 The three cumulatively served for approximately 85 years in elected office: Moran for 35 years, Hyland for 28 years and Puller for 22 years. They were thanked formally by the MVCCA and presented with gifts for their years of dedicated public service.

“The Mount Vernon Council of Citizens Associations is honoring three very special people this evening. These individuals have championed the health and welfare of the Mount Vernon District for many many years. Their accomplishments have been too numerous to recite so I’m going to highlight just a few for each one of them,” said Katherine Ward, co-chair of the council. Ellen Young also collaborated to plan the event in behalf of the MVCCA.

Moran was cited for his 35 years of dedicated public service as a member of the Alexandria City Council, Mayor of Alexandria, and Eighth District U.S. congressman. He “worked tirelessly to ensure Richmond Highway improvements were funded adequately to reduce traffic congestion caused by the BRAC expansion at Fort Belvoir … [and] ... championed the funding of Dyke Marsh restoration.”

The MVCCA presented Moran with a book entitled, “Acts Passed by the Congress of the U.S., 1789” which describes the legislation passed during George Washington’s first term as President of the United States.

Puller served 22 years as 44th District state delegate and 36th District state senator representing the Mount Vernon area. She was praised for “the enactment of legislation which will lead to a Constitutional Amendment to authorize tax exemption status for spouses of our military killed in combat … passage of legislation better known as ‘Ashley’s law’ requiring emergency and first responder vehicles to use flashing lights and sirens when operating in the line of duty.” This law was named for Ashley Mcintosh, a local resident who was killed on Richmond Highway by a police officer driving through a red light without a siren or flashing light while responding to an emergency call. Puller also “supported efforts by the MVCCA to waive the fees and costs of very expensive transportation analysis studies that enabled the MVCCA to move forward to change the Comprehensive Plan to meet our vision for a revitalized Richmond Highway. She also successfully sponsored efforts in the General Assembly to secure the funds to determine what kind of mass transit improvements should be implemented for Richmond Highway.”

In recognition of her years of dedicated service, the MVCCA presented Puller with a book entitled, “The Mount Vernon Ladies Association-150 Years of Restoring the Home of George Washington.”

Hyland’s record of 28 years of public service was highlighted or “we would be here all night if all his accomplishments were listed.” He was praised for supporting the MVCCA Comprehensive plan changes for the Richmond Highway; supporting the funding of studies necessary to plan for widening the Richmond Highway and bringing mass transit to the area; providing the leadership to keep Inova Mount Vernon Hospital open and prevented it from being moved from its present location; supporting the expansion of affordable housing at North Hill; leading the successful effort to authorize a bond referendum to pay for flood mitigation of the Huntington neighborhood which has been heavily impacted by floods in recent years; supporting the creation of an arts center, the development of new communities and the creation of two new public schools after Lorton Prison was closed; supporting the closing of the Lorton Landfill; establishing an annual Town Hall Meeting and Bus Tour as a standard for reaching out and listening to his constituents; and regularly consulting with the MVCCA prior to taking a position on the many policy issues coming before the Board of Supervisors for a decision.