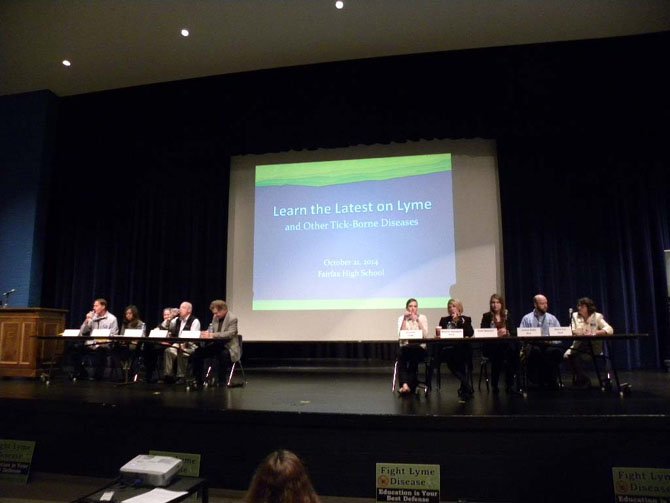 Kate Sheridan was a star athlete and an A-student up until the fifth grade when she suddenly developed flu-like symptoms and one day woke up with a rash on her face in the shape of a bullseye. Her parents took her to the doctor and she was diagnosed with Lyme disease. Soon, she was in a wheelchair and was transferred to a special needs class. “Losing control over your body and feeling yourself sliding backwards and there’s nothing you can do to stop it,” have been her experience since she was diagnosed.

With the support of family, friends, teachers, counselors and a team of doctors, Sheridan was able to graduate from Oakton High School after five years. Now, the 19-year-old is a student at George Mason University and has even started an intense exercise program. She calls herself a “survivor of Lyme disease.”

Sheridan represented the patient perspective in a forum on the impact of Lyme disease in Fairfax County students held on Tuesday, Oct. 21 at Fairfax High School. “Why are we talking about a tiny bug?” said Executive Director of the National Capital Lyme and Tick-Borne Disease Association Monte Skall.

Erythema Migrans, a bullseye shaped rash, is a characteristic symptom of Lyme disease.

LYME may not be grabbing the headlines, like Ebola, but the Centers for Disease Control estimates Lyme cases to be 300,00 per year and Fairfax County has an average of 212 new cases per year for the past five years, said Skall.

Steve Thomas, a teacher at Kilmer Middle School in Vienna, would consider Sheridan lucky—her diagnosis was immediate and accurate. Thomas’ symptoms occurred in 2005, while he and his family were living in Nicaragua. Two years later, his mysterious affliction forced his family to move back to the United States.

Doctors told Thomas that he had ALS. He and his family started planning for his death. It was while watching the documentary Under Our Skin that something clicked for him. “I immediately knew I had Lyme disease,” he said. “I have never been so excited to have had Lyme disease” compared to ALS.

Prior to Thomas’ epiphany, he had had three negative tests for Lyme disease in a three year period.

The disease is hard to diagnose for a variety of reasons. Psychiatrist Joseph Annibali described Lyme disease as the “Great Imitator” because it and its co-infections can mimic other diseases.

As chief psychiatrist at Reston Amen Clinics, he has seen cognitive and psychiatric issues resulting from the disease, such as brain fog or clouding of consciousness, ADHD, anxiety, mood disorders, OCD, and anger. Annibali’s daughter also has Lyme disease.

Because the disease’s symptoms often appear as symptoms of other illnesses, treatment can be hard to pinpoint. Heather Applegate, a psychologist for Loudoun County Public Schools who was undiagnosed for many years, said that the prescription of medication for diseases that are not Lyme disease are common occurrence.

“Tick-borne illness has confounded the brightest of parents and the best of doctors,” said Skall.

“The saddest thing is an undiagnosed patient,” said Applegate. Children who go undiagnosed causes the family fear for the child’s survival and mistrust of health care and school officials. “I’m confident that Fairfax County Schools are dealing with undiagnosed” cases, she said. “It’s a good idea for the school system to be educated about these kids,” said Applegate.

The test for Lyme disease is also unreliable. Nancy Fox has written books and curricula about Lyme disease education. On the day she was tested in 2003, her first result in the morning was negative but she tested positive for Lyme disease later that afternoon.

RESEARCHERS at George Mason University have made some progress in creating a more accurate and timely test for diagnosis called Nanotrap Urinary Antigen Test for Lyme. Lance Liotta and Alessandra Luchini of the George Mason Center for Applied Proteomics and Molecular Medicine said that the test has the potential to increase the specificity and level of sensitivity for Lyme antigens. It is also non-invasive and can test the efficacy of treatment.

How does one prevent Lyme disease? Avoid ticks and tick places, dress properly—long sleeves, long pants—apply repellents and insecticides, and check for ticks, suggested Joshua Smith of the Fairfax County Health Department. But with all these precautions, he said “it is still possible for ticks to escape these defenses.”