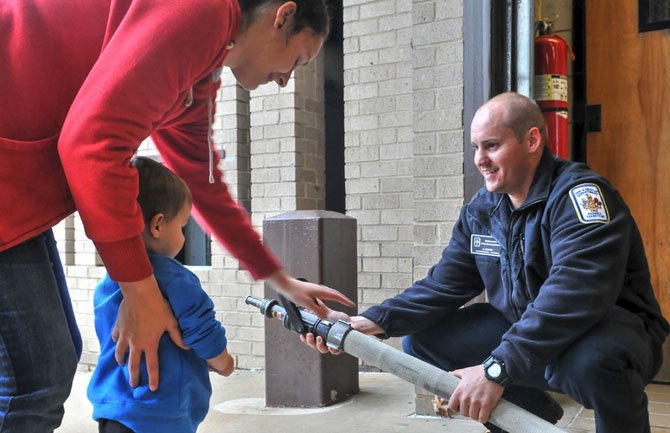 Firefighter/paramedic Christopher Adkins demonstrates the use of a fire house to his nephew Timmy and Timmy’s mother Crystal Adkins at the Mount Vernon Station on Sherwood Hall Lane. Photo by Louise Krafft.

The fire stations in Fairfax County held an open house on Saturday, Oct. 11 as part of National Fire Prevention Week.

The firehouse was aimed at a small painted house façade.

Station personnel gave tours of each facility and the equipment. The first National Fire Prevention Week was Oct. 4 - 10, 1925 as proclaimed by President Calvin Coolidge. Since then it has always been observed in the week with the 9th of October. It was Oct. 9, 1871 when the Great Chicago Fire occurred. The fire burned more than 2000 acres in 27 hours. It destroyed 17,000 structures, left 100,000 residents homeless and killed nearly 300.