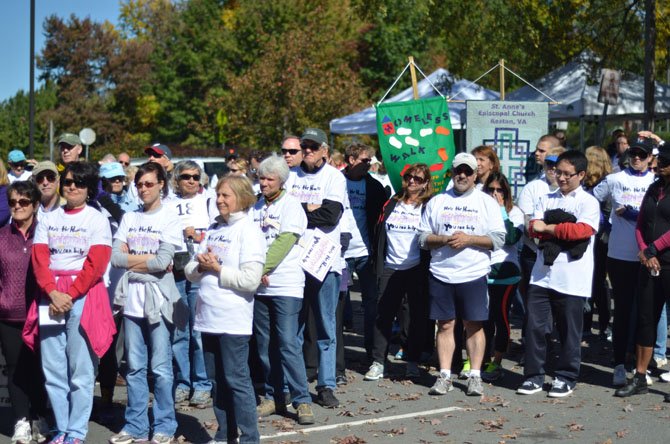 On Oct. 19, 300 participants attended the annual Cornerstones community walk from Embry Rucker Community Shelter to St. Anne’s Episcopal Church and back. The distance was about two miles and was an opportunity to help provide basic and essential items, such as pillows, dishes and food for those who moved into stable housing through Cornerstones’ Rapid Re-Housing Challenge.

Cornerstones is a nonprofit organization that promotes self-sufficiency by providing support and advocacy for those in need of food, shelter, affordable housing, quality childcare, and other human services. Providing some light snacks and water for the event were sponsors Trader Joe’s and Giant. Congressman Gerald “Gerry” Connolly (D-11), Del. Ken Plum (D-36) and Hunter Mill Supervisor Cathy Hudgins spoke to the crowd before the walkers took to the streets. This year was the 11th Annual Help the Homeless Community Walk. “I am just here to share what we do to care for our community,” said Supervisor Hudgins.

“God bless you, and thank you so much for coming here,” said Del. Plum. Congressman Connolly recognized the spirit of solidarity with so many of the participants and praised the efforts of Cornerstones. “Everybody deserves a decent home,” said Connolly. 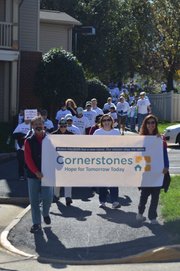 Davood Sedaghatfar and Jill Norcross held the Cornerstones banner and helped led the Oct. 19 march from Embry Rucker Community Shelter in Reston, VA to St. Anne’s Episcopal Church and back.

BEFORE THE WALK BEGAN, one attendee who was recognized was Layla Megahed, a 5th grader at Reston Aldrin Elementary School. Megahed was winner of Cornerstones’ 2014 Help the Homeless T-Shirt Contest, and her design was on the t-shirts given to all whom participated in the Help the

Homeless walk. “I kept thinking and I came up with the idea of a bunch of hands, because of the idea of helping hands,” said Megahed. Soon after the group began their walk through Reston Town Center, past the Reston Spectrum to St. Anne’s Episcopal Church.

“Cornerstones do wonderful work, I am very impressed with the organization,” said Kate Hanely, a resident of Reston and former Chairman of the Fairfax County Board of Supervisors. In 2014, Cornerstones placed 72 clients in temporary or permanent housing. Holding a banner for Cornerstones were Board of Directors Chair Jill Norcross and Davood Sedaghatfar. “We are so appreciative of the community coming out for the event,” said Norcross.

Walkers and participants who arrived at St. Anne’s were welcomed with music by the church’s Front Porch Singers. “St. Anne’s has been a keypoint with Cornerstones,” said Church Outreach Minister Tim Barwich. “Working with the community is very important to us. Cornerstones has such a worthy vision and Reston was founded on community.”

THE EMBRY RUCKER SHELTER is named after St. Anne’s first rector Reverend Embry Rucker. St. Anne’s remains involved in the greater Reston community. On Nov. 2 at 6 p.m. the congregation will hold a candlelight vigil for those affected by the health crisis in West Africa at Lake Anne Plaza in Reston.

Many left the event pleased to have participated in a community event, and volunteers and employees of Cornerstones were satisfied with the levels of participation. “It was a smashing success,” said Susan Alger, volunteer and resourcemanager with Embry Rucker Community Shelter. Donations of toiletries will be handed out at hypothermia prevention programs beginning in December until the end of March.