Novel began as a scrap of paper in her wallet. 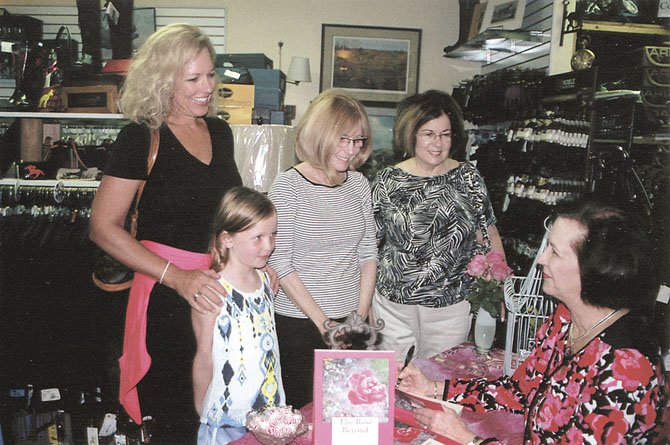 Sharon Allen Gilder (seated) autographs her new novel, “The Rose Beyond” last week at The Surrey. Waiting for their autographed copies are (from left) Beth Garagusi with daughter, Charlotte; Ellen Gordon and JoEllen Brayer. Photo by Cissy Finley Grant/The Almanac

By By Cissy Finley Grant/The Almanac 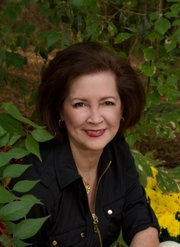 No one is going to accuse Sharon Allen Gilder of being in a rush to get something done. In fact, she took her time deciding what to do about a project she started 20 years ago.

She does admit, however, that she gave considerable thought to the job she had in mind by “carrying a scrap of paper in my wallet.” Tucked among the folds of whatever detritus one desires to put aside, Sharon Gilder honestly admits for several years she was harboring in her wallet what amounted to what would be the first page, of the first chapter, of a book she eventually recently concluded, all 444 pages of it.

“The Rose Beyond” finally came in full bloom following 14 years of dedication, once she made up her mind to get busy. “I spent two years on research,” she said at a book signing last week at The Surrey, a former Potomac gift and saddlery shop now located in Darnestown, opposite Harris Teeter.

Interviewed at the signing, during intervals with friends and neighbors who stopped by for an autographed copy, the author recalled how she would remove, on occasion, the original jottings from its hiding place and re-read the first page, “for inspiration.”

“Writing it was a lot of work. I met (author) Tom Clancy one time and asked him what should you do when you hit a blank wall? He looked me straight in the eye and said, ‘Just write the damn book!’ It was just the kick I needed,” she concluded. 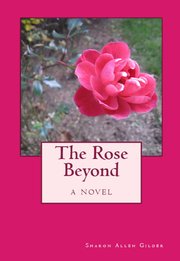 Gilder derived the title of her book from a poem written by A.L. Fink, “The Rose Still Grows Beyond The Wall.” It was read at a funeral she recalled and generally refers to life after death. ”The book is a mystery, just like life after death,” she said. In her book there is a letter involving a secret kept for many years. There is also a parakeet called “Peepers” (she had one as a pet in her childhood). “Peepers” however, isn’t telling any secrets. But, “it is inevitable that the truth will be told,” she said.

The author admitted it was laborious to finally finish her historical romance novel that takes place in Washington, D.C., during the latter part of the 19th century. However, it has not prevented her from participating in numerous philanthropic endeavors in the area including the Brem Foundation to Defeat Breast Cancer and Friends of Montgomery County Animals. She is a board member on both groups. The latter organization will hold its annual fund-raising luncheon at Avenel Club, Nov. 12.

Gilder has also contributed articles to The Washington Post, The Potomac Almanac, The Town Courier and The Gazette. “I have loved to write since I was a young child. I have always loved the feel and smell of books,” she said.

“The Rose Beyond” is available on Amazon.com, Kindle eBook and several local stores.