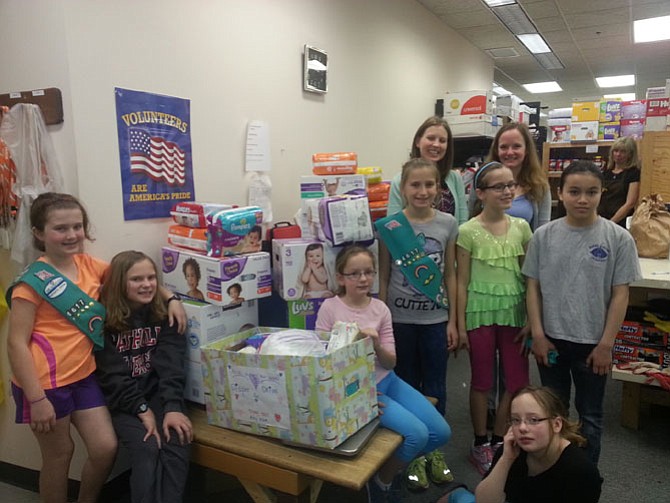 The adults in the back, from left, are: WFCM Director Lauren Sterling, Troop Leader Deborah Forbes, and Food Pantry Manager Terri Kelly. The girls in the front (from left) are Anni Werthmann, Kirsten Mikolashek, Madeleine Lorey, Sara Haworth, Yanna Willett, Kathryn Lorey, and Phoebe Wong. The photo shows some of the diapers the girls collected being delivered to WFCM's food pantry. Photo by by Kim Werthmann

Clifton Girl Scout Troop 4617 collected and delivered more than 5,000 diapers to local charities that help new mothers in need. When the fifth graders began planning their Bronze Award service project, they decided they wanted to help women who were expecting or caring for new babies. They knew from watching their own parents care for younger siblings how much help mothers with babies need, and they could easily imagine how much more difficult the task would be without adequate support or resources. The troop contacted the Gabriel Project, a Catholic charity that assists women in crisis pregnancies, and Western Fairfax Christian Ministries, an organization that runs a food pantry and supports families in need. They learned that one of the greatest challenges facing new mothers is affording diapers. The girls reached out to their schools and churches and were able to collect diapers from St. Clare's Catholic Church, St. Mary's Catholic Church, Clifton Presbyterian Church, and Oak View Elementary School. The girls delivered the diapers to the Gabriel Project and WFCM and received a tour of WFCM's food pantry, which deepened their understanding of the needs in Fairfax County.