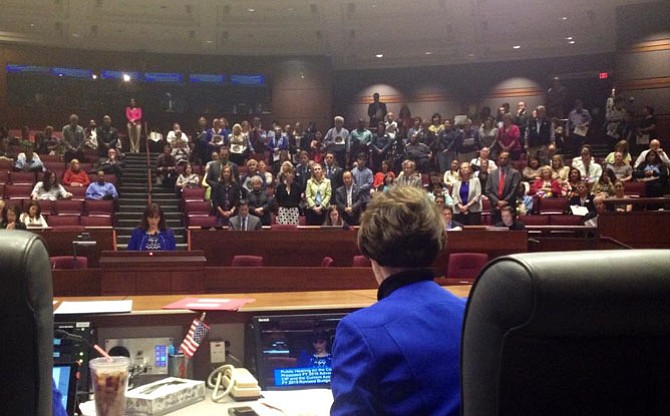 Board of Supervisor Chairman Sharon Bulova watches as School Board Chairman Tamara Kaufax makes her plea for full funding of the schools at the April 7 budget hearing. Photo Contributed

More than 200 people packed the Fairfax County Government auditorium Tuesday, April 7, and 60 speakers were scheduled to testify before the Board of Supervisors on the advertised budget. The hearing began with a presentation by School Board Chairman Tamara Derenak Kaufax.

Members of the Fairfax County School Board sat in the front row, gave a standing ovation, and remained standing as Kaufax finished her testimony to begin the budget hearings.

"Budget reductions come with a price — the price should not be our children's future. This budget does not meet all of the school systems needs and it certainly does not adequately fund our shared vision of excellence for our schools and students," said Kaufax.

The Fairfax County Public Schools requested $14 million more than is in the proposed budget.

Fairfax County Public Schools is the 10th largest school system in the country with more than 188,000 students.

Kaufax cited statistics and trends that challenge the school system. "We would be the sixth largest school division in Virginia, if you counted just our free-or-reduced-price meal population; or the ninth largest if you only counted our English for Speakers of Other Languages population," she said.

Nearly 53 percent of the proposed $3.8 billion county budget is slated to be transferred to the schools.

Supervisor Jeff McKay called it "unconscionable" that the state doesn’t adequately fund the schools. "We will have the same conversations year after year after year," he said, if the Board of Supervisors and School Board don't advocate together in unity. "We need to march together," he said.

Familiar faces advocated for a reduction in spending and taxes, such as James Parmalee of Centreville, and Arthur Purvis, of Vienna.

There were also advocates who encouraged an increase in taxes to ensure that funding will address the needs of all of Fairfax residents.

Steven Davis, chairman of the Economic Development Authority, said the county is experiencing record office vacancy rates, which pushes down commercial property values and, with it, the proportion of taxes paid by the commercial tax base, shifting more of the burden onto residential taxes.

Maintaining Fairfax County's AAA bond rating is critical, Davis said. "You send a signal to businesses around the world that Fairfax County is one of the best managed jurisdictions in the world," he said. "We all know it has taken decades to build a product that gets businesses here and keeps people here."

Brian Engler, of the Fairfax Library Foundation, and Charles Fegan, of the Fairfax County Public Library Board of Trustees, addressed the cuts to the library system. Libraries are part of educating the county’s young people, and provide a myriad of other services to residents of all ages despite significant cuts in recent years, they said.

Two additional hearings were scheduled for Wednesday and Thursday, April 8 and 9, with dozens more speakers ready to testify.