This One’s for Morgan
Votes

This One’s for Morgan 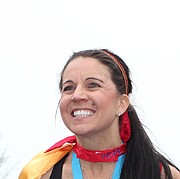 On April 20 of this year, I will be running my fourth Boston Marathon in honor of a beautiful little girl who is 6 years old and battling brain cancer from Center Moriches, New York (Suffolk County). Her name is Morgan Leary and she was suddenly and unexpectedly diagnosed with a PNET brain tumor (Primitive Neuroectodermal Tumor) on Aug. 15, 2014. Unfortunately, her tumor is aggressive and she has undergone several brain surgeries to remove as much of the tumor as possible. She is also currently undergoing chemotherapy and radiation in the hopes of controlling her disease.

Like Morgan, 10 years ago I was diagnosed with a brain tumor in the spring of 2005. I was scared and thought my life would never be the same again. I had my first surgery in the spring of that year and was determined to not let my illness limit what I could do in the future. I would fight to regain my abilities and to push my boundaries, if only to say I am still here and fighting. Having run several marathons before my diagnosis, I slowly learned to walk and run again and was able to complete the Marine Corp Marathon six months later. Since then, I have run many marathons, the Boston Marathon, and finished three Ironman Triathlons, including the 2012 Kona Ironman World Championships.

Along the way, I have had two brain surgeries and multiple surgeries related to my bladder function including a bladder augmentation and a neurostimulator. I have also dedicated myself to help raise brain cancer awareness and toward finding a cure, especially for pediatric brain cancer, which is the second leading cause of death for children.

In September of 2014, I met Morgan Leary and her twin sister, Emma, and immediately fell in love with this wonderful family. Being a typical young girl, Morgan loves to take swimming lessons, play soccer, and especially to run, which she does according to her grandmother, “with her arms pumping and running with all her heart.” Now she is confined to a wheelchair and spends all of her time inside the NYU Medical Center and has not been outside the hospital since August. Morgan should be attending first grade at Clayton Huey Elementary School in Center Moriches, N.Y.

As I push my physical boundaries and continue to run, I hope to use my abilities for those that are not able to walk or run, and to bring attention to the need for increased research funds to help cure brain cancer. To help raise awareness for herself and the many other children, Morgan has graciously and beautifully decorated my New Balance 880v4’s, with which I will run the 119th Boston Marathon. It will be my honor to wear the shoes and when I push through the difficult sections of the run and climb Heart Break Hill, I will think of Morgan and the many other children and young adults I have met that struggle with this disease with a smile on their face and hope in their hearts.

For more information about BethAnn Telford or to contribute to her fundraising efforts, go to www.teambt.org.