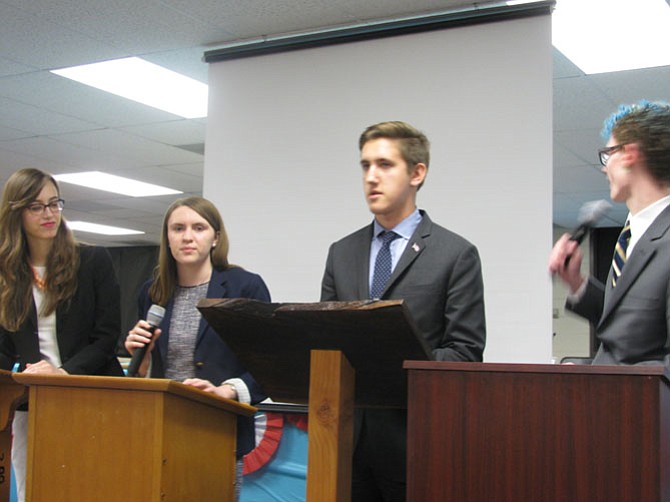 The four student attorneys will be present in the U.S. Supreme Court Tuesday, April 21 to hear the actual oral arguments in the case. Photo by Ken Moore. 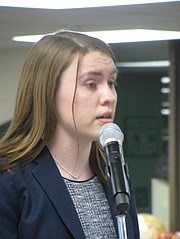 Katherine Cassidy: Respondent Cassidy is on Langley's Model United Nations Team and serves as under secretary-general, and plays cello for the school's philharmonic orchestra. She is also the Logistics Chairman for Relay for Life. She plans on majoring in political science and philosophy at college next fall.

"Mr. McFadden refers to the substance like 'white powder,' he sold it in baggies," said Suter. "What legitimate thought could he have had?"

"Under your reasoning," said Marrogi, "how can anyone be convicted if they don't have a doctorate in chemistry?"

And the questions during Langley High School's Case Day kept coming and coming, only stopping for the 15-minute timer.

"That's what we call a hot bench," said A.P. Government teacher Allison Cohen, who assists students who run Langley High School's Case Day program. "We had so many tough questions from the justices. Especially, those student justices."

Thirty-seven Langley seniors auditioned to be the two respondents and petitioners. Marrogi and Shivani Gupta served as student judges.

"I'm typically a calm person, but this time I was a little nervous," said Davis. "The 15 minutes go by a lot quicker than you think." 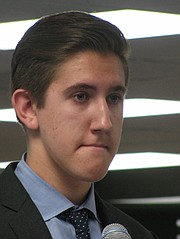 Cameron Davis: Respondent Davis is secretary-general on Langley's Model United Nations Team, which is nationally ranked, and is president of the school's National Honor Society and debate club. He plans to attend Columbia University, where he wants to major in political science or philosophy.

A couple hours later at the end of the full-day court program in Langley's library, their peers asked them to describe how they felt, using only one word.

"The better question is how do I feel now that it's over," said Dell.

The four Langley scholars, who have been rehearsing, debating and mocking since February, were able to laugh again.

They and about 21 other Langley students involved with Case Day will be attending McFadden v. United States, to be argued in the United States Supreme Court on Tuesday, April 21.

"This is the best program in American like it," said Suter, who was clerk of the United States Supreme Court from 1991-2013. "That's why we are here, year after year."

There are 30 committee chair people who coordinate everything from decorations, hospitality, to food and finance, to education, research, social media, technology, and interest and publicity. All 396 students in Langley government classes have roles to play.

"Don't underestimate what a high school student is capable of," said Cohen.

Seniors Isabel Marcovici and Trey McKula coordinated all of it. McKula called his job "an excuse to drink way more coffee than is healthy for any human." 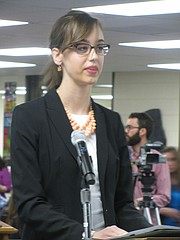 Madeline Shaw: Petitioner Shaw is the President of the Science Honor Society and member of the school's Science Olympiad team, and is also a horseback rider. She plans to attend the University of Virginia as an Echolls Scholar.

The four attorneys were stars of the day, with the highlight of the day being their oral arguments, presided over by Suter, Justice Antonin G. Scalia's son John Scalia, and other attorneys, professors of law, and Janie Strauss, Dranesville School Board member.

"I watched these kids devour merit briefs in 30 minutes, and answer questions that would stop most mortals," said Cohen, who has been involved with Case Day the last 12 years.

But each part of the day served to make it an educational day for all students, those involved and those who watched.

"Since 1993, Case Day has united the entire school to take a comprehensive look into the American judicial system and the inner workings of the Supreme Court," according to the mission of Case Day. "This event allows the student body to delve into a controversial national issue and tackle analysis and argument on a professional level, and provides the unique opportunity to work alongside and hear from legal professionals."

And, from the United States:

"Whether, in a prosecution under the Controlled Substance Analogue Enforcement Act of 1986, the government must prove that the defendant knew, had a strong suspicion, or deliberately avoided knowing that the substance that he was intentionally distributing for human consumption was substantially similar in chemical structure to a controlled substance." 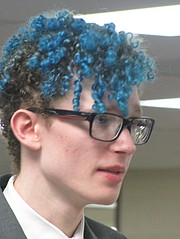 Paul Dell: Petitioner Dell is the captain of Langley's Science Bowl team, and active on the school's Science Olympiad and Scholastic Bowl team. He is a teacher's assistant in AP Chemistry and plays flute and piccolo. Dell plans on majoring in biochemistry, with a double minor in organic chemistry and neuroscience. He has no interest in pursuing law. "I'm a science kid," he said.

Students also invited legal experts and others who dissected the case from different points of view. They also heard from DEA's John Scherbenske, who described the horrors he sees from the effects of synthetic drugs that are made by people trying to outmaneuver the legal system.

SUPREME COURT CHAMBERS is the next stop for the coordinators, the student judges, the attorneys, and many other case day participants.

"I'm fairly confident the government should win," said Davis. McFadden "had a strong suspicion he wasn't doing the right thing."

"He was an unsympathetic defendant but just because he's not sympathetic doesn't mean there's not a legitimate case," said Shaw. "We are here because it is an unclear law."

"The one thing we agreed on is how poorly worded it is," said Dell.

Langley students and teachers wanted to choose a case that was relevant to high school students and capable of changing a person's view of the case, said students Davis and Shaw. They also wanted a case that would allow them to secure 25 seats in the United States Supreme Court.

Many got a tour of the Supreme Court approximately one week before Langley Case Day.

Most of those involved in Case Day said they aspired to be involved since they heard about the program as freshmen four years ago.

"I've never had an experience like it," said Shaw.

Thinking on Their Feet

About 37 students auditioned for the chance to present oral arguments for Langley's 2015 case day on McFadden v. United States. "McFadden was an unsympathetic defendant, but just because he's not sympathetic, doesn't mean there's not a legitimate case," said Langley senior Madeline Shaw. "We are here because it is an unclear law."

"It gave us one last chance to get involved," said publicity chair Alex Grieco, "one last hurrah with the senior class."

"Finishing senior year with Case Day is a blessing," said Marcovici, the coordinator.

Marcovici thanked teacher Cohen for all the support she and other teachers gave to the program. "We are in awe for what you do for us, you do so much, that we forgive you for taking vacation for two weeks," said Marcovici.

"She left us alone for two weeks before Case Day," said Marcovici.

And Case Day went perfectly, due to students' expertise and efforts.

"We thank the faculty, the students and the program sponsors for an outstanding program," Suter said. "The Court is adjourned until next year."

Whether, in a prosecution under the Controlled Substance Analogue Enforcement Act of 1986, Pub. L. No. 99-570, 100 Stat. 3207-13 (21 U.S.C. 813), the government must prove that the defendant knew, had a strong suspicion, or deliberately avoided knowing that the substance that he was intentionally distributing for human consumption was substantially similar in chemical structure to a controlled substance.

Langley students and teachers wanted a case that was relevant to high school students and capable of changing a person's view of the case, said students Cameron Davis and Madline Shaw.

Shaw argued on behalf of defendant and petitioner McFadden while Davis argued for the United States Government. "Most of us changed our opinions of the case. In my case, I changed my opinion five times," said Shaw.

"The one thing we all agreed on is how poorly worded [the Controlled Substance Analogue Enforcement Act of 1986] was," said Paul Dell. "At the end, when we got close to the middle ground, it was so very close."

Oral arguments in front of the U.S Supreme Court in this case were scheduled for Tuesday, April 21. In choosing a case, Langley students and teachers also wanted a case that they would be able to get access to. About 25 students will be attending the arguments at the U.S. Supreme Court Case this Tuesday.

"I'm fairly confident the government should win," Dell said. McFadden "had a strong suspicion he wasn't doing the right thing."

Student justice Ernyney Marrogi asked Shaw and Dell, who argued for the petitioner in Langley's mock trial, "couldn't you only convict a defendant who has a doctorate in chemistry?"

Dr. Ashley Nellis, from the Sentencing Project, last came to Case Day in 2009.

In a study of undergraduate students, she said, half didn't know what bath salts were or whether they were illegal or not.

"We would be very concerned about the ambiguity about the different kinds of these analogue drugs and the uncertainty of whether the people involved in selling knew."

"The criminal justice system is probably not the best place to be dealing with the issue of drug addiction," she said, calling that a health care issue.

"This is pretty amazing," said Adam Bates, a policy analyst with Cato's Project on Criminal Justice. "When I was in high school, we didn't have anything like this."

He called the law in question a "poorly worded statute.

"It is not clear what the Congress intended when they wrote it and that is why there is a Circuit Court split," he said. “If it is hard to define, then maybe we shouldn’t have the law.”

"I should have to know that I'm selling something similar to a controlled substance," he said.

“The drug market is constantly outmaneuvering Congress’ legislation to try to stop it,” said Bates.

John Scherbenske has been a Special Agent with the United States Drug Enforcement Agency, where the horrors of drug use becomes a little simpler and clear cut.

"These drugs are perceived as being legal alternatives," he told the Langley student body.

He described the process and the chemicals used to make these synthetic drugs and how readily available they are to children of all ages.

"You just don't know what you're going to get when you buy a product like this, said Scherbenske.

"It has created a new user population, perhaps people who wouldn't have tried it," he said, "when people your age are trying to avoid drug detection.

In 2011 there were more than 22,000 hospital visits because of synthetic marijuana use in the United States..

"I encourage everyone to go to this website," he said.

It doesn't take addiction to cause irreversible harm. He knows one mother of a teenager who ruined his life by taking synthetic drugs. "She told me, 'I had a normal child on a Thursday and not a normal child on Friday."