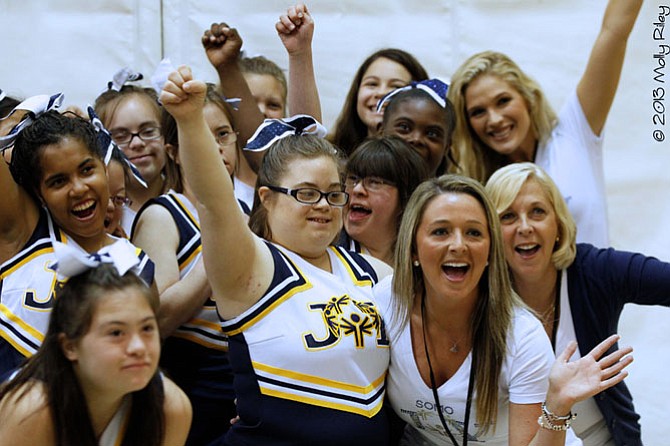 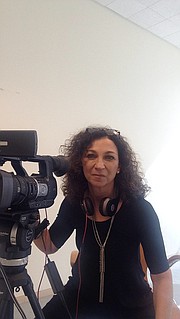 Team JOY, a Special Olympics cheerleading team from Montgomery County makes this pledge of Special Olympians every time they enter into competition — and their courage and bravery have helped them to become champions. They have won the Maryland State Games for the past three years. Following their win in 2014, the JOY cheerleaders learned that they would be the first cheerleaders to go to the 2015 Special Olympics World Games in Los Angeles this summer.

More important than winning is how participation on the team makes them feel good about themselves and boosts their self-esteem. They learn to set goals and meet them, follow directions and learn what it means to be on a team. They discover the value of commitment, enthusiasm, teamwork, courage in the face of challenge or defeat, humility and joy in victory. The story is also about love, happiness, experiencing new adventures, going where they have not gone before and understanding that there is a big world out there to be explored.

Nancy Frohman, filmmaker and producer from Potomac, has been following Team JOY for more than a year since re-connecting with her eldest daughter’s friend, Meaghan Smith, a former Baltimore Raven’s cheerleader who has served as the JOY cheerleader’s coach for the past four years.

Frohman is now in the final months of filming a documentary called “Cheers of JOY” about Team JOY. “What started as a short series for public access television morphed into a much larger and complex story when the head coach and team manager decided to show the JOY team off at the Special Olympics World Games — and received approval to do so. Now we need to raise travel funds for our film crew to go with them to follow the cheerleaders at the Special Olympics World Games,” she said.

Team JOY and their coaches are also raising funds for the cheerleaders to travel to Los Angeles along with their coaches, team manager, volunteers and parents.

In making this documentary, Frohman has filmed the team’s practices, special appearances and competitions. She has interviewed the athletes, their families and coaches — and could not help becoming emotionally attached to the stars of her film. “I’ve just fallen in love with the girls and their parents and the coaches. They never say no, they are always positive and will try everything that is asked of them,” she said. “I am anxious to share their heartwarming story of hope and commitment with the public.”

The public will have an opportunity to see the JOY cheerleaders in action, to meet Frohman and her production crew, and to view a short reel from the film. On May 8, at 7:30 p.m. there will be a free fundraising event at The Universities at Shady Grove in Rockville. The evening will feature live music by The Band, a demonstration by Team JOY, a silent auction and dessert. The purpose is to raise the funds needed to finance the production team’s nine-day trip to L.A. to film The Special Olympics World Games, and to cover some of the costs of post-production. The silent auction will include a 90-minute massage, a private photo session, a private party at Yala Fitness, a Harris Teeter Gift Basket and more restaurant gift certificates. “Cheers of JOY” is sponsored by the Film Collaborative, a 501(c)(3) organization. All donations made to this project through the Film Collaborative are tax deductible to the extent allowed by law.

Smith and Team Manager Darian Packard along with many volunteers, devote every Saturday to teaching the girls cheers, dance movements, formations and athletic moves such as cartwheels and tumbling. The number of cheerleaders has grown from 12 to 70 girls of all ages and different needs.

“‘Cheers of JOY’ is an intimate portrait of Team JOY, the dedication and commitment of its head coach, the impact she has on these athletes and this sport, and consequently the impact they are having within Special Olympics as they bring the sport of cheerleading to the world stage. What began as a profile of Coach Meg and the team’s preparation for the State Championship competition in June, 2014 quickly evolved into a deeper more meaningful look at Special Olympics through the experiences of this team,” Frohman said. “At the heart of the story is Coach Meg, a former NFL cheerleader who embodies the spirit of Special Olympics with her ‘can do’ attitude, love and encouragement, and focus on athleticism. ‘Cheers of JOY’ chronicles her efforts and success in empowering the athletes on the team with confidence by challenging them mentally and physically, encouraging them to do more than they think they are capable of, and giving them a sense of inclusion, camaraderie, and acceptance both within the Team JOY family and outside in the world at large. Although cheerleading is relatively new to Special Olympics and not yet recognized as an official sport, this activity has quickly proven to be as athletic and challenging as any sport.”

“This film is a moving story,” Frohman added. “It will tug at the hearts of its audience. In becoming acquainted with the characters, the audience will see how alike people with intellectual disabilities are to those without, and how meaningful inclusion and acceptance are to the special needs community. By the end of the film, the audience will not only be cheering for the team, but also with the team. I expect the audience to come away from this film with a smile on their faces and in their hearts, and to feel inspired by the spirit at the core of this story.”

For more information and to donate to this project, view the film’s website at www.cheersofjoyfilm.com. For those wishing like to donate to help a cheerleader with her travel expenses is: cheerforla2015.kintera.org/faf/search/searchTeamPart.asp?ievent.