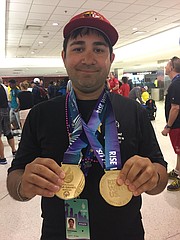 Potomac’s Bijan Bagheri captured two gold medals at the Special Olympics USA Games held July 1 – 6 in Seattle, Wash. Bagheri won the gold in singles tennis and then proceeded to dominate with his partner Brian Salewski to bring home the first-place gold medal in doubles tennis as well. The Special Olympics USA Games included 3,000 athletes, 1,000 coaches, 51 delegations and more than 10,000 volunteers who cheered on the athletes for six days.

This year celebrated the 50th Special Olympics USA Games with a theme of “Rise With Us.”

“Our Summer Games celebrated our athletes, who through their actions and accomplishments at the Games and every day remind us that they are champions who triumph over wide ranging challenges to achieve personal greatness,” said James C. Schmutz, president and CEO of Special Olympics, Maryland.

Twenty-nine-year-old Bijan is the son of Fahimeh and Shahram Bagheri – and the much doted-on grandson of 102-year-old Ana. He loves all sports including swimming, biking and basketball but particularly excels on the tennis court.

His initial experiences of playing tennis at River Falls Tennis Club and participating in Bullis tennis camps cemented his interest and love of the game and he continued to play, practice and train. He currently holds the singles title for the Special Olympics Maryland as well as the doubles title.

Pamela Yerg, area director of Special Olympics, Maryland said, “Bijan has been competing since 2012 and is a very talented tennis player and a joy to know. He works hard, is extremely coachable and determined to master the game. He and his partner Brian are an amazing team; their competition won very few games from them.”

Bijan was first diagnosed with autism when he was two and a half years old. His mother noticed a regression in his skills along with constant movement of his hands, an obsession with lining up his toys and a delay in his verbal and social development. His mom’s observations were confirmed by his pre-school teachers, who recommended educational and psychological evaluations. He graduated from Ivy mount School in Potomac and is now employed in a job he loves at the National Library of Medicine.

He also sings and loves to cook.

Special Olympics was founded by Eunice Shriver in 1968. The mission was to showcase the abilities of athletes with intellectual disabilities and the impact of Special Olympics through world-class competition, inspirational experiences, and modeling inclusion for all. Because of these events, athletes are empowered and confident, make new friends and see themselves for their abilities, not their disabilities. As Bijan says, “Special Olympics has improved my life in every way.”