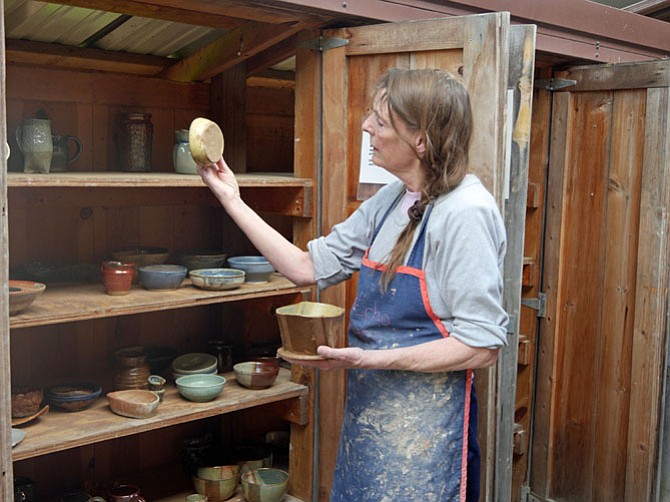 Linda Johnson points to finished bowls and cylinders that have been bisque-fired in an electric kiln over a four-day period, glazed and fired again at 2,000 degrees. Johnson has been teaching pottery at Glen Echo summer camps since the early 1970s when the camp began. Photo by Shirley Ruhe/The Almanac

A lump of brown clay sits on the potting wheel. Water is added as the wheel begins to turn, teenage hands cup around the clay to begin forming the sides, then start in the middle and work outward.

A pottery student works with a mound of brown clay on a potting wheel in a Glen Echo pottery class.

"This will be a bowl or a cylinder," said Glen Echo summer camp pottery instructor Linda Johnson. Pottery pieces are bisque-fired in an electric kiln over a four-day period, then glazed, and finally reduction-fired at more than 2000 degrees.

"Pottery is one of those crafts you can spend your whole adult life studying," Johnson said. She has been teaching at what is now Glen Echo Park Partnership for Art and Culture since the early ’70s when the camp began. Most of Glen Echo's camps are one week, but pottery is an exception as a six-week course-with two three-hour morning sessions a week

Camp programs begin June 15 although not everything is offered each week. Sessions range from visual arts such as drawing, sculpture, and photography to the performing arts such as magic, clown arts, puppetry, music and Irish dance. Glen Echo offers 108 camp sessions with 57 different types of camps and enrollment of close to 1,200.

Meredith Forster, Education Program Manager, says one of the most popular classes is clay animation where the class jointly invents a story line, develops clay characters, a dialogue and then creates a video.

“WE KEEP EXPANDING what we offer,” Forster said. “For instance, this summer is a new partnership with Under the Sea to have a Discover Nature summer camp by creating an aquarium from our former stables." Aquariums and touch tanks will focus on the Chesapeake Bay.

Another new class this year is fused glass featuring how to cut and design glass.

Photography classes have added digital classes to the traditional black and white film classes taught in the large darkroom with enlargers and film developing trays.

Anja Caldwell teaches fiber arts for 6-14 year olds. In three days campers can learn to make a small original doll, body first then adding clothes they have knitted. "We teach special skills for small hands." One group decided to invent a play with their doll characters.

Stocking hats are always popular, even in the spring when temperatures turn warm along with short sweaters that one camper refers to as "her cloak." Caldwell says these provide immediate reinforcement because when a student uses the sweater form she can be usually finished in several days.

A menagerie of tigers, ostriches, prancing horses circle the original 1921 Denzel working carousel at Glen Echo. In the Carousel of Animals summer class, students build their own large carousel animal out of paper maché in a week, and their creations are displayed outside the original carousel after their camp session is over.

One of the employees injects that every year two boys come from Israel to visit relatives and attend camp. Last year they made a wolf and a fox carousel animal and then had to figure out how to get them back home on the airplane. Others made a giraffe, unicorn and blue octopus.

From the parking lot, take a walk over the bridge spanning a gorge with winding creek, a path through the woods and past the carousel, candy corner, and to the stone carving yurt.

Glen Echo Summer camp is located in Glen Echo, Maryland and serves the metropolitan area and well beyond. It offers a wide-open expanse with diverse activities for ages 4-15. Camp runs from 9 a.m.-3 p.m. with extended camp offered until 6 p.m. Forster said, "the camp is handy for families because they can drop off their kids at the same time and one can take fine arts, one magic, and one photography." Then the next week they might move into music, calligraphy and puppetry.

Resident organizations occupy studios in metal-roofed yurts dotted across the grounds while individual instructors share yurt space. This approach allows Glen Echo to expand their programs by adding classes like bookmaking and fiber arts. Forster said, "we have a wonderful venue and space."

All programs are produced in cooperation with the National Park Service and Montgomery County.