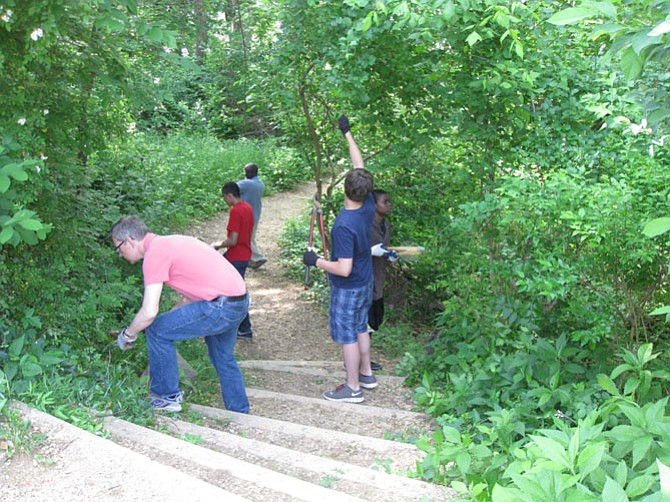 The Potomac Conservancy seeks volunteers to help in the cleanup of the C&O Canal National Park this Saturday, Aug. 22. Above, photos of volunteers from past cleanup events. Photo Contributed

Potomac — This Saturday Aug, 22 from 9 a.m. to noon, the Potomac Conservancy invites volunteers to join them at the River Center in Cabin John to participate in a cleanup of the C&O Canal National Park.

Volunteers will be able to choose which area they’d like to work on. They can help clear trash and debris from the stretch between the C&O Canal and the Potomac River. They will also have the opportunity to clean up the area around the River Center, which is a Lock House restored to its 19th Century roots that includes exhibits about how people can get involved in keeping the Potomac Healthy.

“Every time I go to the River Center around lunchtime,” Blackman said, “I always see people in suits at picnic tables, so we’re going to restore some of those” as well as touch up a wall containing some graffiti.

Another area that volunteers will be able to help is by pulling garlic mustard and other non-native plant-species that one doesn’t need a botany degree to identify. “Invasive plant species are a huge challenge. They tend to latch on and take over and crowd out the native plant species, which crowds out native wildlife and upsets the whole balance of the ecosystem,” said Blackman.

Volunteers are encouraged to sign up in advance on the Potomac Conservancy’s website, Potomac.org/events, so that Blackman and others can plan to have the appropriate number of supplies on hand, but all comers will be welcomed. Plan to arrive between 8:30 and 9 a.m. Families are encouraged to attend; children under 18 must bring an adult.

The Potomac Conservancy hosts events throughout the year to involve the community in its efforts at the Cabin John River Center as well as Fletcher’s Cove. Keep abreast of activities by signing up for its newsletter at http://potomac.org/take-action/.