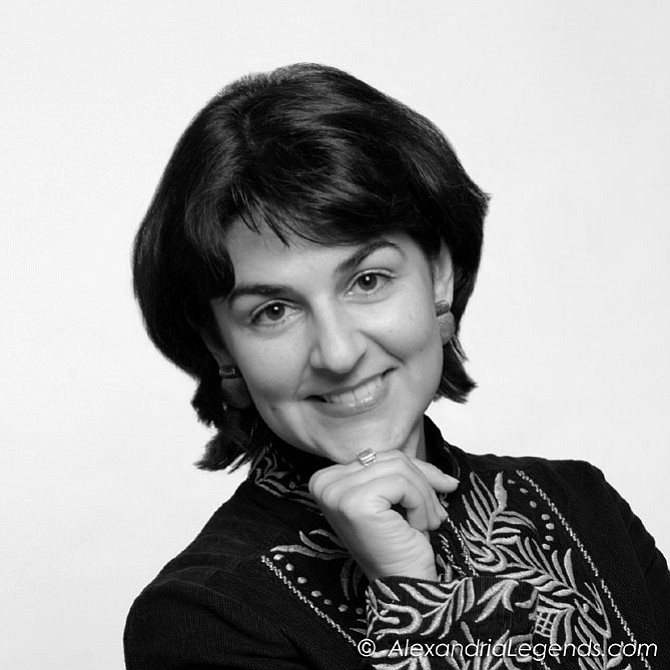 Living Legends of Alexandria is an ongoing 501(c)(3) photo-documentary project to identify, honor and chronicle the people making current history in Alexandria. The project was conceived in 2006 to create an enduring artistic record of the people whose vision and dedication make a positive, tangible difference to the quality of life in Alexandria. This is one of a series of profiles that will appear this year. For information, to volunteer, donate or nominate a future Legend, visit www.AlexandriaLegends.org.

If necessity is indeed the mother of invention, few can match the birth and subsequent success of Empowered Women International, EWI, founded 13 years ago in the heart of Alexandria by Marga Fripp. Having immigrated to America from Romania to access life-saving medical treatment for her son — knowing not a word of English — Fripp has since dedicated her life to “paying it forward,” so that other women in challenging dire circumstances can gain the opportunity to achieve the American dream. It is for the creation of EWI that Fripp has been named a Living Legend of Alexandria.

Fripp comes by her credo of “high expectations; no excuses” naturally. Raised in a family of modest means in Galati, Romania, she attended that country’s Open University. (Shortly after immigrating to America, Marga obtained degrees from Montgomery College and the University of Maryland.) At a young age, she became a leader in Romania’s freedom movement, speaking truth to power in her role as a fearless broadcast and print journalist, at no small risk to her own freedom.

Since its founding in 2001, EWI has made a wide range of services and support available to immigrants, low-income women, and women of color. More than 3,500 women have benefited from EWI’s focus on personal empowerment. While the curriculum emphasizes entrepreneurship and business education, no aspect of a student’s life goes unattended to.

Fripp, EWI’s founding president and “chief visionary,” has worked tirelessly to assemble a network of attorneys, social workers, lenders, and others to address the personal and family issues facing EWI’s students. Thirteen years of experience has demonstrated that to become a successful businesswoman, one needs to have one’s personal life in order to develop the confidence that is crucial to business and personal empowerment. EWI’s programs are continually evaluated, adjusted, and expanded, to ensure that students receive the most up-to-date preparation for entrepreneurship in a technologically changing economy. EWI’s intensive three-month Entrepreneurship Training for Success has been supplemented with the individualized, six-month “Grow My Business” course. Most recently, the Alumni Entrepreneurship Service provides more long-term mentoring and advanced training.

The Alexandria connection remains dear to the hearts of Fripp and her staff. Many of EWI’s most successful businesses are located in Alexandria, and the headquarters on Henry Street remains the hub of the organization. The city’s vibrant arts scene was an excellent match from EWI’s earliest days with its students’ creative spirit. Many of the businesses launched through EWI’s programs are in the performing and graphic arts.

Fripp and her EWI team have successfully solicited the support — both financial and in-kind — of businesses; schools and colleges; churches and government agencies throughout Northern Virginia and the Washington metropolitan area, matching those resources with students and alumnae to provide group and one–on-one mentoring. This has enabled EWI to provide scholarship assistance, so that no student is denied access for financial reasons. And to ensure long-term commitment, EWI asks its students to pay it forward by teaching and mentoring new generations of students, thus forming a lifelong sorority of support and collaboration.

EWI has also established partnerships with socially conscious lenders, including Kiva and Life Asset, to provide critical micro financing for its start-ups. This aspect of Fripp’s vision is an excellent match with that of her husband, Jesse Fripp, a prominent figure in the world of international development and a strong supporter of women’s empowerment. Marga and Jesse have two children: Geanina, a college student in Tennessee, and Arthur, who attends high school locally.

This ever-growing network has enabled EWI to open new offices throughout the region while maintaining its headquarters in Alexandria. Fripp’s credo of “onward and upward” accepts no excuses for a student’s difficulties. Instead, EWI does whatever it takes to provide that person with the support and tools necessary to succeed.

Fripp has spread the word on behalf of this “can do” spirit in nationwide and international speaking appearances; through TED talks and other on-line avenues; and on Northern Virginia-based radio and television. Walk through Alexandria’s Old Town and Del Ray neighborhoods and one is hard-pressed to encounter a merchant or veteran resident who does not know her. Indeed, she was instrumental in encouraging Nina Tisara, founder of Living Legends of Alexandria, to apply for its nonprofit status in an early EWI class.