McLean Teacher Trained to Teach About the Holocaust
Votes

McLean Teacher Trained to Teach About the Holocaust 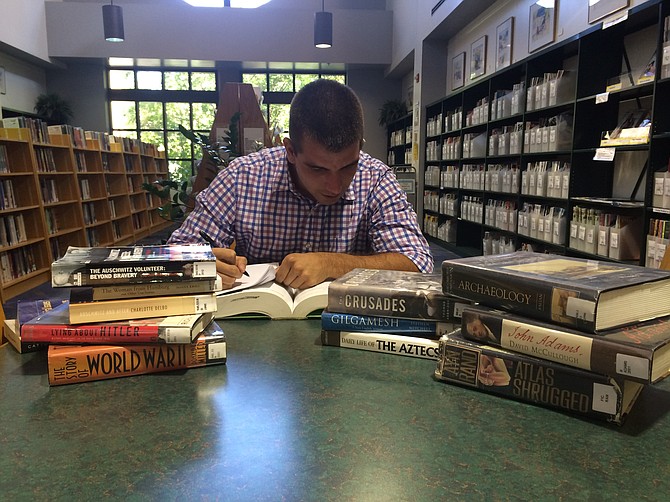 Shoes confiscated from prisoners at Majdanek, on loan from the State Museum of Majdanek, Lublin, Poland. Visitors frequently report that the sight and smell of the 4,000 shoes is the most searing memory from their time in the museum. The Belfer Teacher workshop equips teachers from around the country to teach the difficult subject of the Holocaust.

Cristian Manoatl doesn’t claim the most traditional approach to his own schooling when he was a McLean High School student. Now that the 2004 graduate is back in the hallways of his alma mater as a fourth year teacher, Manoatl chooses professional development courses and summer plans with creativity and openness but purpose.

“I want to do anything that benefits my students,” said Manoatl, who teaches world studies and history, and students with all types of learning disabilities including autism.

Manoatl, a Vienna resident, spent portions of this past summer as one of 244 teachers selected for an intensive training at the U.S. Holocaust Memorial Museum’s Belfer National Conference for Educators.

“We want teachers to be confident, to be equipped to do this,” said Peter Fredlake, director of the Museum’s teacher education and special programs. “This is just a beginning of a long-term relationship between us.”

The conference, established in 1993, is part of the Museum’s effort to equip educators throughout the country and the world with the knowledge and skills to effectively teach Holocaust education in their classrooms.

“It had a profound effect on me,” said Manoatl. “It’s inevitable that one day I’ll be teaching the Holocaust.”

“We learned how people can be coerced into something so horrific and how we need to be vigilant when we witness injustices around us,” said Manoatl.

MANOATL LEARNED DIRECTLY from Holocaust survivor and museum volunteer Henry Greenbaum, who survived the Auschwitz Buna-Monowitz subcamp and Dachau death march before being liberated by U.S. soldiers in April 1945.

Manoatl called that portion, “the part that touched me the most.

“We were taught the resilience of the human spirit.”

“We were taught the resilience of the human spirit,” he said. “We actually connected with the experiences that other humans endured. That, to me, is the point of a museum.”

Manoatl and the other teachers worked with the Holocaust Museum’s educators and scholars in sharing strategies and approaches for teaching about the Holocaust, Nazi propaganda and antisemitism by using various media, such as literature, survivor testimony and diaries that the museum provides. They toured the museum’s exhibitions.

“We want to give them a good head start in the classroom,” said Fredlake, “to gain knowledge, resources and confidence to teach a really difficult topic.”

Past scholars of the museum’s program have done “phenomenal work in the field,” said Fredlake, educating teachers in Rwanda how to teach about genocide, and working in Bosnia, and on a Navajo reservation.

Past teachers have formed a network, Rwanda Genocide Teachers Association.

“This little seed that we planted … with these two teachers has blossomed halfway around the world,” Fredlake said.

U.S. Rep. Tim Walz (D-Minn.), a former student at the Belfer Conference and former high school history teacher, came to the course this summer to talk about his experience and how he has used it in his career.

Walz spoke out in support of the international movement to end the suffering in the Darfur region of Sudan in 2007. "The genocide in Darfur is unconscionable and unacceptable. We teach our students about the Holocaust and they repeat the phrase ‘never again’ and yet again and again we as a government fail to prevent genocide. As the most powerful nation on earth, it is our duty to work to prevent genocide, to intervene when genocide begins and to recognize all instances of genocide, both past and present.”

“In the face of rising anti-semitism and Holocaust denial, educating students about this history is becoming increasingly urgent.”

“In the face of rising anti-semitism and Holocaust denial, educating students about this history is becoming increasingly urgent,” said Fredlake.

“We talk to teachers a lot, help them with why they are teaching this,” he said. “That keeps them focused.”

He tells educators, “If you want to be a better teacher be a good teacher of the Holocaust.”

AS A STUDENT, Manoatl called himself a jokester, often sarcastic, and a student who didn’t always hand in homework or attend classes.

But he remembers his McLean High School teachers and coaches as people he related to and who taught him the lessons he needed to be a good person.

Attendees of this summer’s Belfer Teacher workshop at the U.S. Holocaust Memorial Museum, which included Cristian Manoatl of Vienna, a teacher at McLean High School.

“When I walk down the hallways, I now look at it as having 25 bosses in the school,” he said, of his former teachers. He still inevitably calls his colleagues with the formal surname prefix.

“I always tried to connect with them as people,” he said.

He shares empathy with students who have obstacles in the way of their schooling and tries to connect with them.

“I had great teachers, I had wonderful support from my family, I just never bought into the game of school,” he said. “The last two years of high school, I got my act together and I started to apply. I found out I wasn’t as dumb as I looked.”

“Every day is different and I love it,” he said. “What motivates me is the connection with the students.”