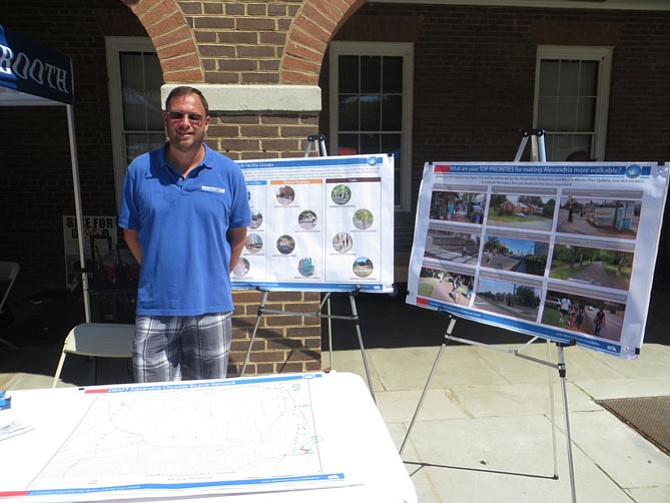 Steve Sindiong, principal planner with the City of Alexandria Photo by Vernon Miles. 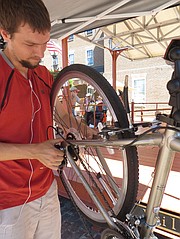 Derick Lawson from Velocity Bikes fixes a bike at the Alexandria farmers market.

Do cyclists in Alexandria ride in the road or on the sidewalk? How do cyclists riding the Mount Vernon trail pass through Alexandria? With an update to Alexandria’s Transportation Master Plan, city officials hope to fix these and other local problems surrounding the transportation middle child: bicycles. A call has been put out requesting public input in an update to the Pedestrian and Bicycle elements elements of the City’s Transportation Master Plan. The local cycling community has already begun expressing strong, and sometimes conflicting, views on the future of bicycles in Alexandria.

“Our goal is a recommendation of proposed bicycle network priorities,” said Steve Sindiong, principal planner with the City of Alexandria. “We’re identifying 10 pedestrian projects and strategies. We’re looking at how we can do better for education and outreach … particularly to elderly and non-English speaking residents. [We’re emphasizing] more education on rules of the road.”

Christian Meyers, founder of Velocity bicycles in Del Ray, said education would be a good first step for creating a more bicycle-friendly culture in Alexandria.

“There needs to be more education for cyclists and drivers on sharing the road,” said Meyers, noting that many drivers are unaware of the state law requiring a three-foot distance between them and a cyclist.

“Alexandria is pretty good about sharrows,” said Meyers. Sharrows are shared-lane roads marked by a symbol of a bicycle and arrow points.”But there’s still a lot of people in Alexandria who don’t ride bikes and don’t understand bike culture or needs.”

But others say the current sharrows are insufficient.

But Moore noted that adding in bicycle trails through Old Town will only get more difficult as the area gets denser and fills with drivers. Moore said a north-south bicycle connection through Old Town would be ideal. At the farmer’s market in front of City Hall on Aug. 22, Sindiong and other members of city staff set up a booth with a map of the city and stickers available where citizens could mark preferred bike trails or express concern over others. Most of the green stickers were north-south trails running through Old Town. Sindoing said city staff will be recommending Royal Street as a key route through Old Town, rather than some of the citizens’ recommendation of Union Street.

In the West End, Sindiong said the updates to the Pedestrian and Bicycle section focus around improvements to Van Dorn street, including a potential bike path along the main road. Moore noted that there are some great paths in the West End, like the Holmes Run trail that runs from Eisenhower Avenue to Lake Barcroft.

Both Meyers and Moore spoke fondly of the capital bike share program in Alexandria. Though both expressed initial reservations concerning the program, they said that the overall impact had been an increased number of local residents interested in biking, which in turn led to a surprising uptick in business. Meyers said additional bicycle-themed events through the city could help encourage understanding between cyclists and non-cyclists. Alexandria does host events where free bells and lights are distributed, but Moore says often these events target the wrong ridership.

“The city gives bicycle equipment like lights out on trails to visitors,” said Moore, “but the people who really need it are the people working in restaurants during the day or the local homeless people, many of whom don’t have bells or lights.”

Sindiong said the current plan is to have a draft plan put through Alexandria Engage in early January, 2016, for City Council endorsement in April of 2016. The city is hosting a Community Meeting concerning the update on September 24, from 7 to 9 p.m. at the Durant Center at 1605 Cameron St. Sindiong said this meeting will be a key opportunity for public input on the plan.