City hopes to reconcile longstanding feud between pedestrians and cyclists. 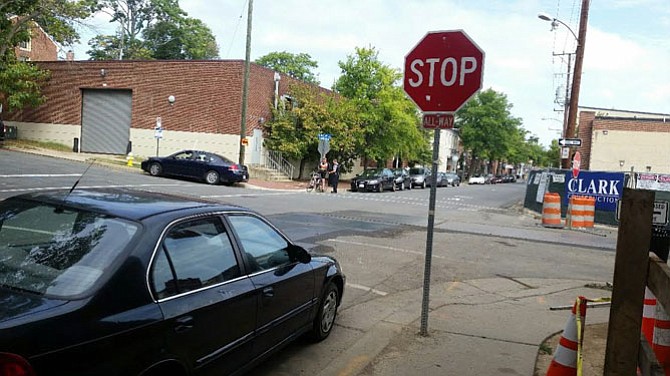 The Sept. 24 public hearing on the topic was divided between two factions: the spandex wearing cyclists and the pedestrians, mostly Old Town residents. Before the meeting began, both groups circled the room to look at potential plans. More than once, there were sparks as the two groups intersected.

“Mount Vernon trail riders need to be taken out of Old Town,” said Randy Randall, an Old Town resident, as he pointed to a highlighted route on one of the city maps. The city’s plan, currently, is to utilize Royal Street as the primary avenue for bicycle traffic from the Mount Vernon Trail. “The bicyclists need to be taken down Columbus Street. Royal is a bad idea.”

Randall noted that Lyles-Crouch Traditional Academy would be located just a few blocks from the path of the cyclists, which drew sharp objections from nearby cyclist Ken Noice. Noice, a bicyclist from Alexandria’s West End, noted that there are schools throughout the city, and that locating the trail west of Route 1 would put them near Jefferson-Houston Elementary. Noice pointed out that there are schools throughout the city, many near bicycling area, and they share a peaceful coexistence. Locating the path west of Route 1, however, could prove dangerous for cyclists.

“On Columbus, I would have to cross Route 1,” said Noice. “That is very unsafe for cyclists.”

On the opposite side of the room, pedestrians and cyclists were able to lay out their ideal street at an interactive board. Options included separate bike lanes, green space, and expanded sidewalks, allowing local citizens to feel the same frustration as city staff at not being able to incorporate all of the ideal options. Most of the posted options included either the cyclist integrated with the flow of traffic or on the sidewalk. 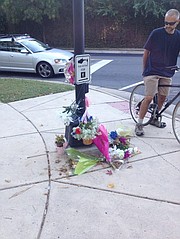 A memorial to Deborah Ann Bogar at the intersection where she was fatally struck.

Virginia law does not prohibit bicycles from riding on the sidewalks, but Alexandria City ordinance prohibited bicyclists on the sidewalk until 2013 when the law was relaxed to allow cyclists on all sidewalks except a few blocks in Old Town near the waterfront. However, RJ Elridge, a consultant working with the city, said that the plan works with the assumption that this is not the general preference.

“Bicyclists don’t like riding on sidewalks,” said Elridge, “and pedestrians generally do not want them there either.”

For bicyclists like Noice, a large part of the problem with the current policies is that they focus too heavily on Old Town with little regard for the rest of the city.

“There’s many issues [across the city] and people just seem to see Old Town,” said Noice.

On the West End cyclists’ wishlist would be a protected bike lane along Duke Street, and possibly on Seminary Road and continuously along King, which Noice said would help improve metro access for riders in the West End. Also in the West End, Noice said that the crosswalks and sidewalks in the Landmark Mall area need to be improved if the city expects anyone to be able to use the mall.

The focus of the update is on a complete streets program, which City Project Manager Steve Sindiong described as a focus on making the roads and sidewalks fully accessible to all modes of transit. At the public hearing, Sindiong and city staff asked for feedback on people’s preference of bicycle transit options, most of which seemed to center around signs clearly marking that cars are obliged to share the road or, ideally, a fully separate bicycle lane.

Alia Anderson, also a consultant with the city on the project, said that the plan identified and prioritized 10 stretches of road in the city that do not have a sidewalk on both sides of the street, including stretches along King Street, on Seminary Road, and in Arlandria.

Though unrelated, the change follows a step up in bicyclist traffic enforcement in Old Town, including a $91 ticket for running a stop sign at the corner of South Union and Franklin streets. According to Crystal Nosal, a spokesperson for the Alexandria Police, the increased enforcement is the result of local requests for traffic enforcement. Once a complaint is received, Nosal says a motor unit is sent out to the location to see if the concern is valid. More than 25 tickets were written in the last week for bicyclists in Old Town and over 300 warnings were issued during the King Street Arts Festival. As for the cost of the ticket, Nosal says that Virginia Code sets the ticket cost at $30 with $60 added in court fees.

“We don’t set up the laws, we enforce them,” said Nosal. “Don’t run the stop signs and you won’t get a ticket.”

Carrie Sanders, division chief of transportation planning, also noted that the update includes for the intersection at Commonwealth Avenue and Braddock Road where, on Sept. 3, a woman was fatally stuck in an hit and run. Deborah Ann Bogar, a 60-year-old resident of Alexandria, was killed in the early morning by a construction vehicle. According to Sanders, a lead on the pedestrian crosswalk has been added, meaning that pedestrians have time to cross before the light turns green for any of the vehicles. Sanders said the city is also planning to install a “no turn on red” sign and is still open to suggestions for intersection improvements.