Mount Vernon: Picnic with the President 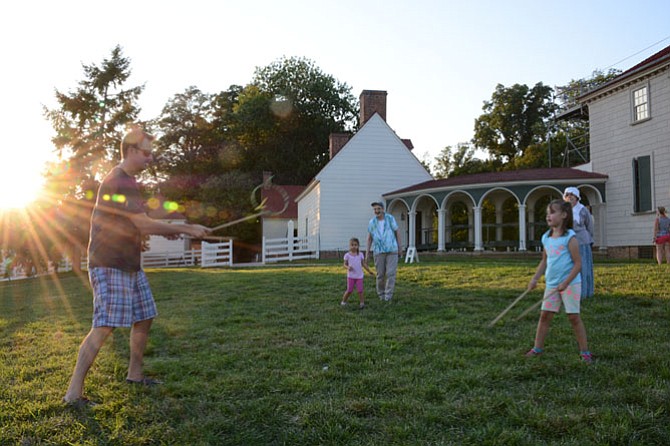 Around 1,700 local residents and Neighborhood Friends of George Washington’s Mount Vernon estate gathered for the annual picnic family night to benefit a new fire prevention and suppression system for the grounds.

Lorne Campbell was told the historic property he bought on Robertson Boulevard was once part of an area where George Washington liked to have his pigs graze.

“It gives us an excuse to eat like a pig,” said Campbell’s daughter Jasmine. Originally from Australia, Campbell moved to the United States and became a naturalized American citizen. In 2001 he purchased the property.

As an Aussie transplant, Campbell said he “thought buying a piece of America would be amazing.” The family’s living room is now adorned with two portraits of the Revolutionary War General.

The Campbell’s are part of a community of homeowners with residences on the roughly 500 acres where Washington operated the five farms of his estate.

For decades, the Neighborhood Friends group has supported the estate, including a program to fund maintenance and restoration projects.

Over the years, those projects have included re-shingling the mansion roof, restoring the windows of the mansion, reconstructing the blacksmith shop and repairing the east lawn slope.

“They really have stepped up to do the not-so-sexy projects,” said George Washington’s Mount Vernon director of special gifts Carolina Camargo, “but they’re crucial to keeping Mount Vernon going.” 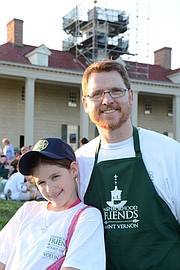 Lorne Campbell (right) and daughter Jasmine (left) wander through the crowd selling raffle tickets. Campbell’s property on Robertson Boulevard in the Mount Vernon area was said to be a place where George Washington grazed his pigs.

In the 1980s, Camargo said, a vacuum system was installed. Though it was never required to be used, in the case of a theoretical fire, the mansion would be evacuated and the system would suck out all the air, keeping any fire from continuing or spreading.

But the generations-old home, Camargo said, turns out to be full of tiny holes, rendering this process much less effective. The new system, which has already started being implemented, provides a room-by-room “mist” that should be better able to isolate the fire.

The plan is to install the system throughout the estate’s mansion and then move on to the outbuildings.

In the event of a fire, Mount Vernon staff would be able to rely on detailed digital documentation of every aspect of the house, a project undertaken by the Mount Vernon Ladies’ Association, to restore it exactly as it was.

To help raise the money for the new mist fire-suppression system, the Neighborhood Friends hosted its annual Family Night Picnic in the evening on Aug. 23. Camargo said they expected around 1,700 friends, representing 1,600 households in the Mount Vernon area.

Olivia Lough (left) and Henry Kohler (right) of the Mount Vernon area take in the view of the Potomac River with Martha Washington as she crafts a seat cover for a chair, doing “work with a needle.”

Families converged on the East Lawn of the estate overlooking the Potomac River and grazed on food from the new Alexandria Wegmans grocery store and refreshing beverages provided by Anheuser-Busch.

Together with those and other sponsors, Neighborhood Friends dues and other donations, Camargo said $1.2 million of the $2 million has already been raised for the fire-suppression system.

The evening’s activities included horse-drawn wagon rides, a chance to explore the estate’s own modern fire truck and play period games like “game of graces” and rolling hoops.

“It’s wonderful the tradition this place has kept together,” said Erik Kohler, who lives in Stratford on the Potomac and whose mother is a member of the Neighborhood Friends group.

First Lady Martha Washington, working a flowery purple seat cushion with a needle and watching over the house while her husband was in at work in Philadelphia and “bringing government to the new city,” said she is grateful for the help of the Neighbors.

“We are indebted to all those who offer their love and care,” she said. Though visitors come to the mansion from far and wide, “Non are as precious to me as our Neighbors.”