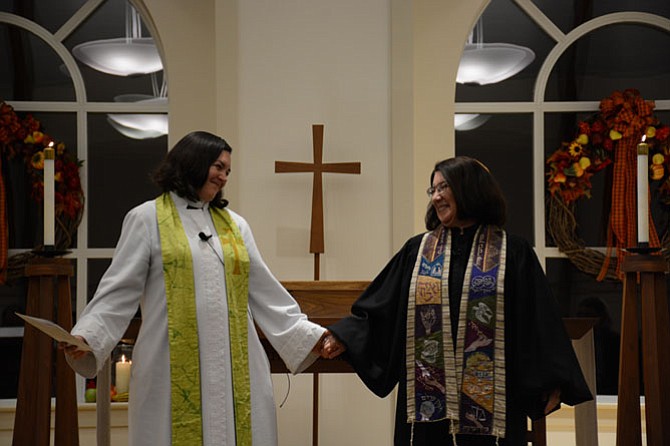 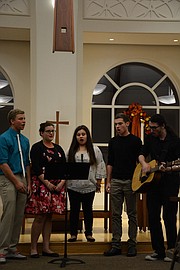 Choirs representing both Abiding Presence Lutheran Church and Temple B’nai Shalom combined to perform music from both the Christian and Jewish faith traditions.

Congregations from Abiding Presence and Temple B’nai Shalom packed the Burke Lutheran church sanctuary for a special joint service the night before Thanksgiving.

A joint children’s choir with singers from Abiding Presence and B’nai Shalom perform “America the Beautiful.”

When he applied for Minister of Music position at Abiding Presence Lutheran Church in Burke, David Chavez said he was told there’s just one non-negotiable date on the calendar: Thanksgiving eve.

On Christmas and Easter, he could find a sub, but the night before Thanksgiving is different. For one night, Chavez can work with more than the church choir, bringing in singers from Temple B’nai Shalom in Fairfax Station as well.

“It’s such a blessing to have a large choir, to do things we can’t do with a smaller one, like different densities of harmony and the type of sound,” Chavez said. “You want to do it right, do it well.”

On Nov. 25, the two congregations celebrated their 29th year of hosting joint services the night before Thanksgiving. It’s a tradition that started before members of Temple B’nai Shalom even had a building to call their own. For nine years, the congregation at Abiding Presence hosted B’nai Shalom’s services while their members raised money to build a synagogue.

Rev. Meredith Keseley joined Abiding Presence as Pastor in February 2010 and, like Chavez, was asked if she was open to the joint worship service. “I’m excited about it,” Keseley said. “Their Rabbi Perlin was one of my first phone calls. She said, ‘We’re in this together, I’m your Rabbi.’ And now I’m her Pastor.”

Over the years, Keseley said, “I’ve learned just how much our faiths have in common, from the spirit of giving to our deepest desire for peace in this world. Religion can be such a divisive thing. We’re able to make it a unifying one.”

In the joint service, the hosting congregation alternates each year, while the visiting religious leader delivers the sermon. The service is constructed collaboratively and participants sing hymns from the Lutheran song book. Since this year’s service was held in Burke, Rabbi Perlin delivered a Thanksgiving message about developing a sense of gratitude.

“Saying ‘Thank you’ means more than we can ever realize,” Perlin said. “Gratitude can change your brain for the better. And there’s still time to re-wire yourself into a thankful brain by Hannukah or Christmas.”

Perlin continued with a story about the columnist Art Buchwald being nice to a taxi cab driver as a positive social experiment. She linked the anecdote to the Hebrew term for gratitude, “hakarat hatov.”

Buchwald was trying to spread goodness by being nice to one person and spreading hakarat hatov, Perlin said. “It means recognition of the good someone has done for you. We need to thank others the way we thank God.”

Frank Cohn of Fairfax has been a member of Temple B’nai Shalom for 28 years -- Rabbi Perlin married his wife and him before the synagogue was built. They look forward to the joint service each year, he said.

“We love it, we think it’s great,” said Cohn, whose wife leads the choir. “And we love the songs in this service. The bottom line is people have a wonderful time together, that’s what this is about.”

Phil Franke of Springfield played euphonium in the brass choir for the service. He’s been a member of Abiding Presence about as long as Cohn has been with B’nai Shalom. “I look forward to Thanksgiving eve greatly,” he said. “It’s not just about us, but the entire faith community. There are a lot of commonalities.”

“Judaism and Christianity share part of the Bible, and their values translate to the other religion,” said Aiden Smith, a sophomore at W.T. Woodson High School and a member of the Temple B’nai Shalom Teen Jewish Alternative Music Project. The five-member ensemble performed at the Nov. 25 service for the first time, early in the program.

In addition to the joint service, the two congregations collaborate in several ways, including sending their youth to visit a service of the opposite organization for worship.

To close the evening, all the musicians joined in singing “America the Beautiful.”

“It’s so refreshing and gives me hope, to literally sing together in one body means more than just making pretty music,” said Chavez. “It’s a living symbol: We can come together with what we have in common, that’s what I want us to be about.”