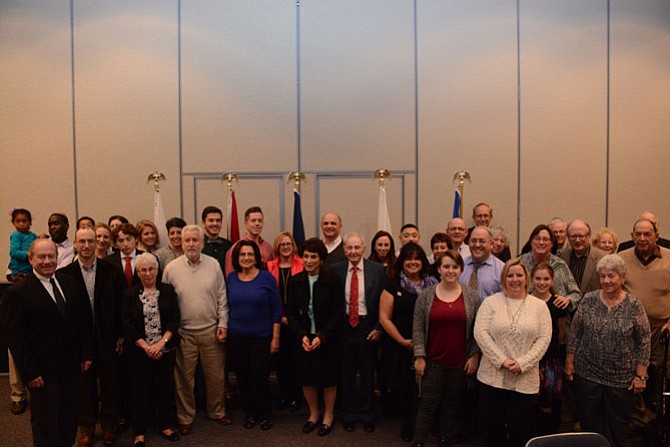 Lt. Col. Jacob Kramer was concerned after finding a Star of David in a moving box. The Springfield resident was previously stationed in Morocco by the U.S. Army. Kramer said he and his family tried to “cleanse the Jewishness” out of their house there because of how dangerous it was to be one of just 3,000 Jews in the north African country.

“It’s very difficult to conceal your identity,” Kramer said. “We entered that decision with the clearest of minds, the weightiest of hearts.”

Kramer shared his story during a special Shabbat dinner at Temple B’nai Shalom in Fairfax Station to honor veterans and their families. Shabbat is the day of the rest in the Jewish faith that lasts from sundown to sundown on the seventh day of the week.

“We have a lifetime of stories in our congregation,” said Senior Rabbi Amy Perlin, “of Jewish communities in the services with the connection of a uniform and a religion.”

Jim Sturim is a retired colonel in the U.S. Air Force, where he did a lot of test-flying and acquisition while serving. He helped organize the evening’s events on Nov. 13, which included three mini-sermons by veterans from the congregation during the Shabbat service following dinner.

“Tonight, veterans will have a bigger part,” Sturim said. “They’ll give a glimpse of what life was like for those Jews in the service.”

Stephanie Leung of Fairfax served 26 years in the U.S. Navy, including posts in Bahrain, Israel and Kenya. “Sometimes you have to really put behind your identity,” she said.

Other speakers described finding support in practicing their religion from military chaplains, as well as more welcoming locals in Scotland and Italy.

For Bev Seiden, a retired Commander in the U.S. Navy, the service was where she found her identity. During her mini-sermon, Seiden described growing up Roman Catholic and then drifting away from the Church. As a nurse in the Navy, she met the man who would become her husband and decided to fully embrace his faith as her own: Judaism.

“I felt I was joining a long line of people,” Seiden said about completing her conversion and becoming a bat mitzvah, or full-fledged adult female member of the Jewish community. “It was like being encircled in a warm hug.”

Seiden spoke to the congregation from a lectern in the temple’s sanctuary. Behind her several sacred Torah scrolls are housed in a compartment behind heavy wooden doors. A special binder for the scrolls includes material from uniforms of different U.S. military branches, representing a deep bond between the congregation and the armed forces.

B’NAI SHALOM MEMBER Suzanne Lederer’s father once held services with one of the same sets of scrolls while working for the U.S. government in Panama. Years later, the temple coincidentally acquired the scrolls, which Lederer’s children then used in their mitzvah services transitioning to adulthood.

“There’s a thread running from my father to his grandchildren through this Torah of ours,” Lederer said. “It’s a wonderful connection.”

As the service concluded, Rabbi Perlin gave a final message of remembrance and thanks for veterans and their sacrifice.

“We’re always aware there were times when we were not free to pray,” she said. “Now we pray in freedom together.”