Arlington's ‘Love the Run You’re With’ 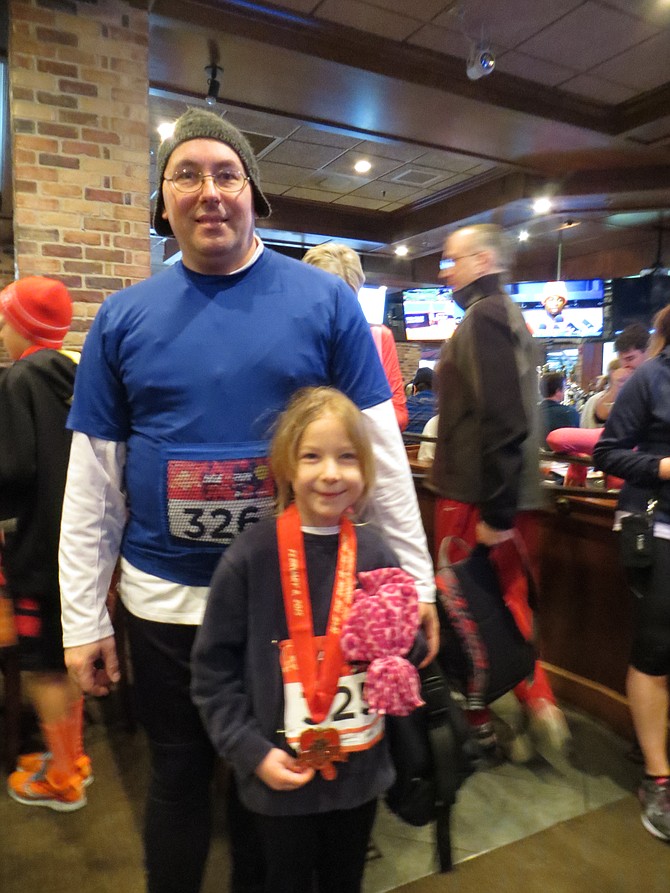 After weeks of miserable cold, the weather warmed up just enough to make the Pacers Running “Love the Run You’re With” 5 kilometer race in Arlington bearable. More than a thousand runners came out to Pentagon Row at 9 a.m. on Feb. 8.

“The weather was fantastic this year compared to last year,” said Maggie Lloyd, one of the runners. “Last year we were freezing. This year’s a lot more comfortable, so I think we’re a lot happier with our times.”

Lloyd was running in a co-ed singles team with Dustin Renwick.

“We ran it last year and we were somewhat disappointed with our times,” said Renwick. “I don’t know if it was the cold, the course, or what. This year it felt a lot better.” 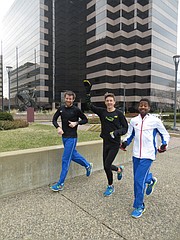 Three runners in the Arlington race.

Renwick noted that this is one of the first early season races in the area. The warmer weather was one possible reason for the large turnout. For many runners who’ve started over the winter break, this was the first chance to show off their progress in a race.

“This was my first 5k,” said Darina Markozashvili, “it got pretty challenging towards the end.”

Her running mate, Sari Dallal, was a little more experienced.

“The course was really fun,” said Dallal. “This was my fourth race. Two of the other ones I did were with the same event company, so they all have a very similar vibe.”

“I’ve been doing this since 2008 as a volunteer,” James said. “There is so much energy here, and the people are all very nice.”

Runners Christina Glover and Brett Wallace relax after the race.

Some reactions to the race were mixed.

“I’ve run a lot of other Pacer’s races before,” said Wallace. “This one was pretty average.”

“There was nothing really special for me here,” said Wallace, “but the karaoke is still to happen.”

Wallace’s running partner, Christina Glover, was looking forward to the karaoke as well.

“I didn’t meet any single guys, but it’s not too late, there’s still the karaoke,” said Glover, who was deciding between Katy Perry’s “Firework” or Al Green’s “Tired of Being Alone”, which she noted was “Really going to be a great mood booster for the crowd.”

The karaoke immediately followed the awards ceremony held at Champps restaurant. The fastest runner was Kevin McNab, a 28-year-old from Washington D.C. who ran the three miles race in just over 15 minutes. Other awards were broken up by ages and split between couples, singles, and “it’s complicated.”