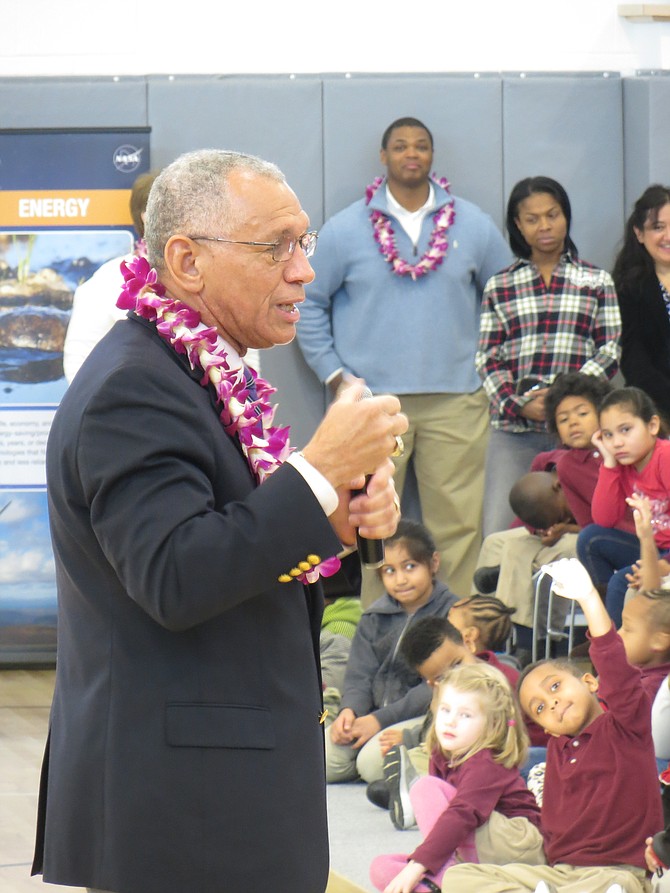 For many children, “astronaut” is one of the quickest answers when asked what they want to be when they grow up. A visit to Jefferson-Houston School on Feb. 13 from NASA Administrator Charles Bolden aimed to encourage those students to hold onto that answer. Bolden and other NASA leadership spoke to adults on how to cultivate an interest in math and science, and showed how by fielding questions from Jefferson-Houston students on life in space.

Bolden speaks with students after the assembly

“The big thing is to expose them to the available opportunities,” said Bolden to parents. “Kids know the name, but they don’t know we’re so spread around the country. We try to show them those opportunities.”

For Donald James, NASA’s associate administrator for education, that job is a lot easier for NASA than it is for many school teachers.

“All it takes is for NASA to show up,” said James. “We have great brand recognition. When astronauts show up, that gets kids inspired. Hands-on education helps them understand what it means to be an engineer. It gets them asking the right questions: What does space feel like? Is there life out there?”

Bolden told the students in the packed auditorium that he had a couple pieces of advice, but that he’d keep it short so that he could answer more of their questions. He told the students to study hard, no matter what they wanted to do, and to never be afraid of failure. Bolden told them that was a lesson he learned from Ronald McNair, one of the first African American astronauts. Bolden said McNair inspired him not to succumb to his own self-doubts.

While Bolden presented the children with some general background information, notably about growing up in the segregated south and how difficult that made getting into the Naval Academy, most of his time at Jefferson-Houston was focused around answer questions from the students.

“Are astronauts for real?” asked one student. 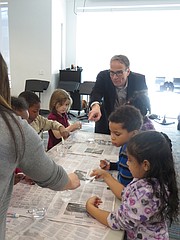 Bolden was a test pilot in the Navy before becoming a space shuttle pilot, flying missions on the Columbia and Discovery, and eventually becoming a mission commander. Bolden was appointed by President Obama to be the administrator of NASA in 2009.

“Look around you. We have lots of races and cultures and creeds. The space shuttled allowed all of us to go into space,” he said.

Most of the questions from the students were focused around what it was like to be in space.

“You get a way to look at the planet that is absolutely breathtaking,” said Bolden. “You’re not seeing the whole world, but big pieces of it.”

He also clarified one of the student’s questions about being “over gravity.” While astronauts float weightlessly, Bolden explained to the children that there are still effects of gravity in space. Some of the students asked about landing the Space Shuttle, which Bolden described as not being as particularly gentle as they may have seen in TV shows. 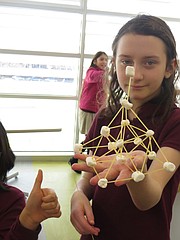 “But we’re working on it,” said Bolden. “We’re trying to make science fiction into science fact.”

While Bolden showed the students footage from onboard the International Space Station, he told them that he was never able to go on board, it was after his time flying missions. But he told the students that some of them would go to the International Space Station, and there was a chance some of them will go to Mars. Bolden estimated it would be 15 or 20 years before he says NASA will be confident enough in the safety of the mission to send a mission to Mars.

Despite a hopeful question from one student, Bolden said he’d never had an extra-terrestrial experience, but said that NASA was still looking for it on Mars.

“When you go to Mars, don’t assume life will look like us,” Bolden advised the students. “A microbe, one cell, that’s still life.”

Bolden stayed in the auditorium after the presentation to take photos with students and answer their questions about the space program. Pamela Chance, the Jefferson-Houston parent who set the program up, said she’d heard Bolden was a nice man and figured it wouldn’t hurt to reach out to NASA and see if he could arrange a visit to the school. Chance figured Bolden’s prestigious status would work in her advantage.

Students show off the results of their experiment.

“The pretty girl doesn’t get asked much to the dance,” Chance said. “He was a kind man, so I wasn’t surprised when he said yes. NASA coming here presents more inspiration than almost anything in the classrooms can.”

After the presentation, students dispersed back to their classes for hands-on science experiments. First grade students experimented with chromatography by lining the top of a coffee filter with black marker and dipping it in water to show the color spectrum. The experiments were supervised by Craig Witmer, a parent and an engineer who works with the Navy.

At the sixth grade level, students used pipe cleaners to make the tallest, structurally stable objects they could. Others worked with spaghetti and marshmallows to learn about building structures and tension. Some of the structures built by the students had a conical, distinctly spaceship-like appearance.