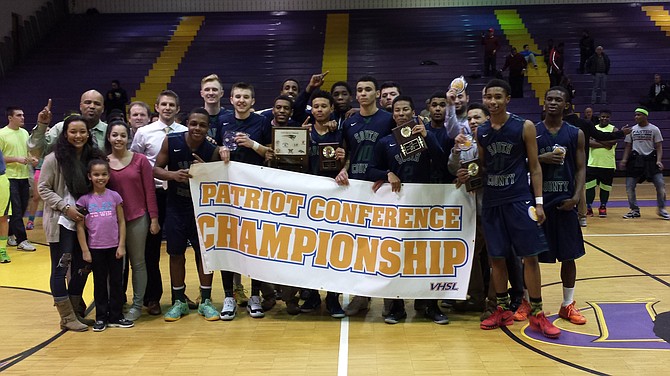 Members of the South County boys’ basketball team could have quit long ago. They could have thrown in the towel during the regular season, when injuries contributed to a 3-9 conference record and the lowest seed in the Conference 7 tournament.

After upsetting T.C. Williams and Lake Braddock to reach the conference championship game, the Stallions could have laid down when trailing by eight points in the fourth quarter against top-seeded Woodson.

And after having a conference championship ripped from their grasp when Woodson star Eric Bowles buried a 3-pointer at the buzzer to force a second overtime period, the Stallions could have lowered their heads and accepted that they were fortunate just to be there.

Instead, South County played with the same mental toughness that helped the Stallions turn a sub-par season into a championship opportunity.

Despite trailing at some point in all four quarters of regulation and each overtime period, South County captured the first conference championship in program history with a 91-86 triple-OT victory over Woodson on Tuesday night at Lake Braddock Secondary School.

With the score tied and less than 2 minutes remaining in the third overtime period, South County sophomore Garrett Reaves knocked down a clutch 3-pointer, sparking a 10-2 run that secured the Stallions an improbable piece of history.

“It’s overwhelming,” South County freshman guard Isaiah Borders said. “We came from the seventh seed. ... We worked hard to get here and we finished it out.”

South County’s hard work nearly went for naught. The Stallions led 72-69 in the closing seconds of the first overtime period when Woodson’s Bowles, who had just missed a potential game-tying 3-point attempt, got another chance at the top of the arc. This time, the Conference 7 Player of the Year came through, sending the game into double OT with a 3-pointer at the buzzer.

THE STALLIONS were struggling emotionally as Woodson grabbed a two-possession lead early in the second overtime period. South County guard Chu Chu Enechionyia answered with a 3-pointer, cutting the Cavalier lead to 76-75 with 2:02 on the clock, when head coach Travis Hess called a timeout

“Our kids were clearly down, but Chu Chu hit a big 3 and it cut it to one and I called a timeout and said, ‘OK, now we have to officially let it go,’ because even I was harboring it,” Hess said about the fallout from Bowles’ game-tying 3-pointer. “... I wear my emotions on my sleeve. I was bummed because we had the game won and every one of our kids knew it. And for us to not fold is really a testament to how tough our kids are and how far we’ve come from the team that we were in November.”

Borders, South County’s leading scorer with 29 points, fouled out during the second overtime period, but the Stallions managed to stay alive, tying the score at 79 and forcing a third OT.

“Our whole playoff motto is we never get too high and we never get too low,” South County senior guard Brandon Berry said. “We always stay even. We were saying no matter what happened this game, we were always going to stay at that one level --- even. Even after Isaiah fouled out, after Eric hit the shot, because we stayed even, we were able to battle through that adversity.”

“He’s a phenomenal talent,” Hess said. “He’s got things he needs to improve on, but a freshman in a conference championship game to go for [29] points is amazing. He has all the talent in the world and I look forward to developing his talent because I think he could really be a special player in the next couple of years for us.”

Berry, a second-team all-conference selection, finished with 12 points and was named tournament MVP.

“He has come such a long way and, more importantly, he’s a great young man,” Hess said. “I’m beyond proud of him. He’s an amazing kid and had a great season and when you can combine his leadership with the talent of Isaiah and the rebounding of Veronta [Jones] --- all of the pieces that we have have finally come together at what is the most important time in the season. For a coach, there’s nothing more rewarding and satisfying than that.”

Jones finished with 13 points for South County and Reaves added 11.

The Stallions’ successful postseason is a far cry from a sub-par, injury-riddled regular season. First it was senior guard Jason Remy suffering an Achilles injury prior to the season. Then it was 6-foot-6 center Ish Hussein suffering a knee injury early in the campaign. Enechionyia missed time with back trouble and senior guard Tanner Gregory sat out during conference play with a high ankle sprain.

South County finished the regular season with a 10-12 record.

“It was an up-and-down ride throughout the season,” Berry said. “We had some guys with season-ending injuries and stuff like that, but we really pulled together as a team and I’m really proud of these guys.”

Borders said he felt the Stallions’ fortunes start to change when they defeated Woodson 54-52 on Feb. 10, late in the regular season.

“The game [where] we beat Woodson the first time,” he said. “That’s when we knew we were on a roll and it started from there.”

After receiving the No. 7 seed in the Conference 7 tournament, South County edged No. 2 T.C. Williams 59-55 on Feb. 19 in Alexandria, earning a berth in the 6A North region tournament. Four days later, the Stallions traveled to Burke and thumped No. 3 Lake Braddock 78-61 on Feb. 23 in the conference semifinals.

“I think we’re capable of making it to the state tournament,” Berry said. “I think we’ve proven that we’re one of the better teams in the region --- big wins over TC, Lake Braddock and now Woodson. I think the sky’s the limit for us.”

“Coach Hess is amazing,” Berry said. “He’s done everything. He’s stayed up late nights putting in game plans, he’s come to practice early [and stayed] late. When it comes to [college] recruiting, he’s really making sure guys [are] getting their stuff done. He’s a great coach and even better man and the amount of respect I have for him is unbelievable.”

South County’s Borders and Gregory were named to the all-tournament team, along with Woodson’s Matt Ayoub, Tyler Wilson and Bowles.

South County will host Chantilly in the opening round of the 6A North region tournament on Thursday, Feb. 26. Woodson, which won the previous two big-school region championships, will host Robinson.