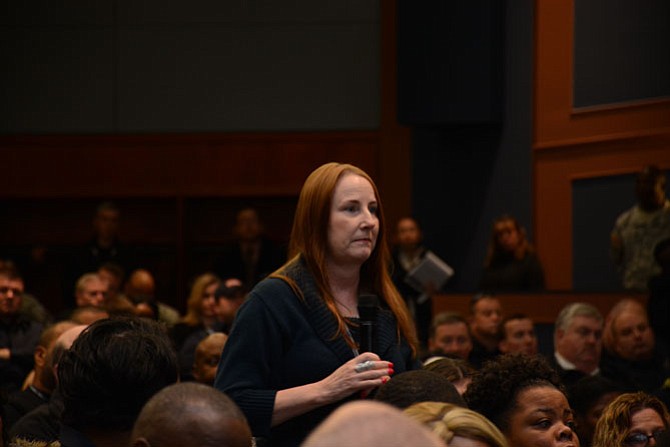 Monica Cayanong of Mount Vernon asked about the effect of the Army force drawdown on mental health services at the Jan. 23 listening session at Fort Belvoir. Photo by Tim Peterson.

Sasha Cinthia Figueroa of Woodbridge: I work on the garrison, in the Directorate of Human Resources (DHR) staff action office. I’m concerned over the possible changes, the reduction in personnel. The information they gave was more about high headquarters, so I’m good today but still have concerns. If Fort Belvoir is still growing, how can you reduce personnel?

Members of the Fort Belvoir community —civilians, active duty, retirees of each military branch — gathered Jan. 23 to learn about the future of the garrison. The listening session titled “Army Force Structure and Stationing” was one stop on a 30-installation tour to gather community input for the Army senior leadership as it prepares to further reduce the size of the force.

Col. Karl Konzelman of the Department of the Army headquarters gave context for the drawdown, beginning with the Army’s 2013 announcement it would reduce its Active Component (AC) of troops from 570,000 to 490,000 as a result of the Budget Control Act of 2011 and 2012 Defense Guidance. That reduction also included bringing Brigade Combat Teams down from 45 to 32.

With the Army and Department of Defense facing a $95 billion shortfall over the next 10 years, Konzelman explained, the force will continue to have to shrink.

The presentation referenced the 2014 Quadrennial Defense Review, forecasting the AC continuing to fall to 440- to 450,000 by FY2017. That drawdown would require “end strength reductions and structure adjustments” across the Army.

“We’re not doing high fives in the Pentagon,” said Konzelman. “That’s not where we think we should be.”

The listening tour is part of a Supplemental Programmatic Environmental Assessment aimed at helping Army leadership make strategic decisions about how it will move forward in late spring, early summer.

“We can’t predict the future, our potential adversaries, overall strength of the army,” said Buchanan. “But we know your concerns are important to us.”

“This is one of the most difficult military drop downs of our time,” said Deputy Secretary of Veterans and Defense Affairs of Virginia Jaime Areizaga-Soto, in his portion of the presentation. “It’s appropriate that we should guide the Army’s decisions in its ultimate mission to fight and win our nation’s wars.”

Gerald Musarra (left), retired Army, of Mount Vernon and Sean McCarthy, retired Marine Corps, of Woodbridge. Musarra: I’m concerned about our national defense, the security of our country. This is about drawing down our force and that’s not good. Why are we reducing when no one else is? How are we going to protect the United States, knowing the numbers are against us? McCarthy: I came to find out the impact of the new structure and stationing, and how that affects the retiree community, disabled veterans especially. My questions were answered.

During the presentations, Fort Belvoir Garrison Commander Col. Michelle Mitchell began by noting a reduction in garrison staff over the last five years that’s resulted in a staff to customer ratio jump from 1/18 to 1/35.

She also highlighted how the base has “doubled in strength” over the same period, and listed plans for structural growth at the garrison, including: a commissary expansion opening tentatively in April 2016, a 141-room Staybridge Suites hotel across from the Belvoir Community Hospital to be completed in early summer 2015 and construction beginning on Fort Belvoir Elementary School to bring students back on post and give back capacity to Woodlawn Elementary School.

In addition, Mitchell addressed the garrison’s new automated entry system that will be going through testing in February.

Following the presentations in the question and answer session, members of the community voiced concerns over the scope of the force drawdown, including the impact on civilian workers. Over half the workers on the garrison are civilians.

In a worst-case scenario, Buchanan and Konzelman said, the worldwide force of over 260,000 Army civilians could see cuts of up to 26,000. But, they reiterated, a number of factors including community input on structuring, future Sequester cuts and Army strategy decisions will continue to play out before any major decisions come to pass.

“There's a lot of angst,” said Mitchell, following the listening session. “I think that's always the case when there's not a lot of information and people don't know what's next. But I also felt a lot of community in the room. A lot of individuals shared the importance of Fort Belvoir and I would just say from Belvoir's perspective, it's very mutual, because we depend very heavily on the community.

“What we do know is the reduction is coming,” Mitchell continued. “But we're just at a point of uncertainty. Fort Belvoir is going to do what we need to do to be in compliance.”