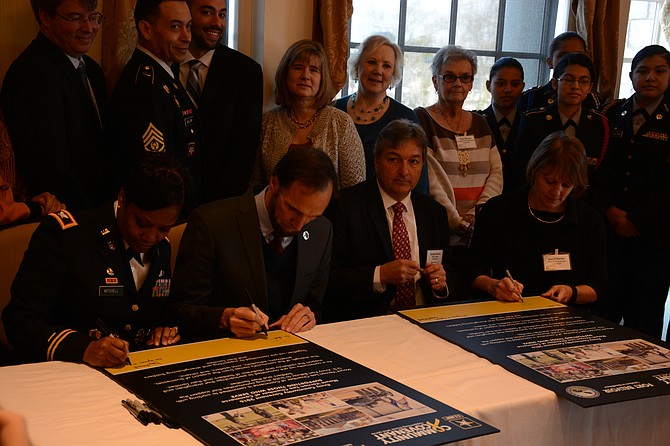 Photo courtesy of the Mount Vernon-Lee Chamber of Commerce/U.S. Army

A new 141,000-square-foot commissary is expected to open on Fort Belvoir in November 2016.

Uniformed members of the West Potomac High School JROTC color guard paraded into the dining room at the Belle Haven Country Club as classmates in a chamber choir sang the national anthem to open the February Business Breakfast of the Mount Vernon-Lee Chamber of Commerce.

“It’s about working together, it’s about us,” Storck said, referencing the value behind the formality of signing the covenant written out on poster board. “Fort Belvoir is in many ways Mount Vernon. It represents different sides of Mount Vernon.”

Mitchell, who is nearing the end of her two-year post as commander, responded, “We depend on this community.

“You all have done right by us,” Mitchell continued. “It’s our pleasure to renew this covenant.”

In her presentation on the garrison, Mitchell began by explaining how the post will be affected by the nearly 60,000 military and civilian employees the U.S. Army plans to reduce by the end of Fiscal Year 2018. 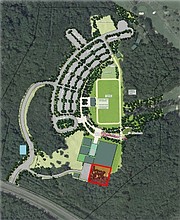 Photo courtesy of the Mount Vernon-Lee Chamber of Commerce/U.S. Army

The Fort Belvoir golf course has been reconfigured to make room for the coming National Museum of the United States Army.

Of those stationed at Fort Belvoir, Mitchell expects to lose just 395 by the end of FY 2017, but her message was, “We’re doing an awful lot with less people.”

Mitchell reported on the success of the post’s new auto-entry system that went live in October, 2015. Since then, she said the system has tallied 3,211 access denials, 191 active warrants and 970 suspended driver’s licenses.

The commander went on to highlight the addition of several child development centers on post, a second elementary school that’s under construction and a $45 million new commissary expected to be open by November this year.

In addition, she reminded, the Fort Belvoir golf course has been open to the public since 2015 and is being reconfigured to make space for the anticipated National Museum of the United States Army.

“It’s going to be a big museum,” Mitchell said, “and bring a lot to the community from a historical perspective.”

Mitchell also looked ahead at future post additions of a fire station, Belvoir Federal Credit Union branch, pet grooming and lodging, and replacement of old HVAC systems around the base.

Finally, speaking directly to the businesses represented, she said 1,200 men and women are scheduled to be processed out of the U.S. Army in 2016. “The Belvoir community would love to keep that kind of talent in Virginia,” Mitchell said. “They need jobs.”