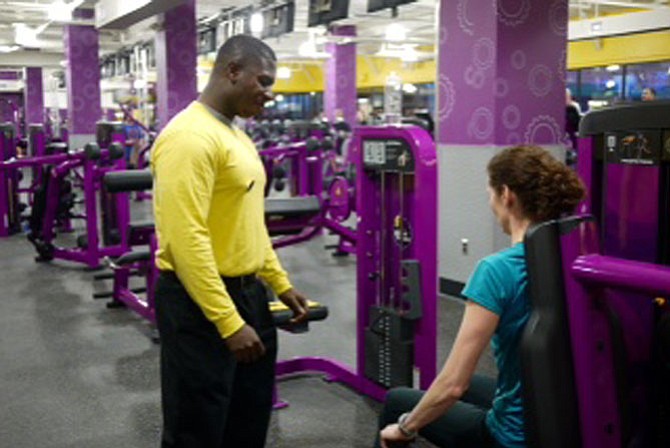 Planet Fitness, the health club franchise known for its “judgement free zone,” opened its second club in in December. Located at 5960 Richmond Highway, the club celebrated with a ribbon-cutting party on Jan. 14. Special guest, “The Biggest Loser” finalist, David Brown, was available to talk about fitness tips, and his own fitness philosophy.

Trainer Manny Danso works with a client at Planet FItness

Brown was an inspiration for at least one of the attendees at the opening; Madonna McGovern, an Alexandrian resident who just joined the Planet Fitness gym, said she loves it. She is also a member at another gym in the area, but they aren’t open 24 hours a day like Planet FItness. She also likes that the trainers are free of charge and they are a lot more focused on her. “The customer focus at Planet Fitness is amazing”, she said. “They really seem like they care.”

Madonna McGovern likes the customer focus at Planet Fitness and the fact that it runs 24/7.

McGovern, who had been in an accident that left one side weaker than the other, said she got “routine” training advice from the other gym, and the trainer seemed bored. At Planet Fitness, “the trainer was much more aware of my situation; he told me I had a weak side and that he would be developing a regimen for me that helped me get that side stronger.” The “no judgement zone” philosophy is important for McGovern. Success stories like Brown’s are also important.

Brown weighed 409 lbs when he started his fitness effort; he put on the weight caring for his brain cancer-stricken wife and children for 10 years. When she died, Brown looked at himself and realized he was all his children had left; he applied to the Biggest Loser program but as he told them: “I’m going to do this, with or without a TV program.” Brown has five “keystone habits” in his daily routine: working out, praying, serving in some way, connecting with family, and reading/writing. He dropped 222 lbs on the show. Although he doesn’t work out 7-8 hours a day the way he did on “The Biggest Loser,” hr puts in 2-3 hours. 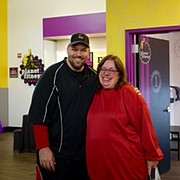 Mario Ballestros, the general manager at the new gym, said one of the things he does at Planet Fitness is “walk- arounds” every 15 minutes. He is looking for cleanliness (“just because it looks clean doesn’t mean it is clean”) and he asks clients when he does the walkaround: “What do you like? What don’t you like?” He wants his clients happy. He doesn’t want to see anyone waiting in line, and with 81 fitness machines, that shouldn’t be a problem. Ballestros was plucked by owner Kevin Fagan from his job at another gym to take over the new location because of his belief in Planet Fitness as a concept. One of the features that looked particularly helpful is the QR code on the machines: hold a phone up to it and it will say what seat position to use. Another feature, for Black Card holders, is the Hydro massage bed: 92 degrees of water goes up and down your spine for five minutes, and you can tell the machine where it hurts the most. 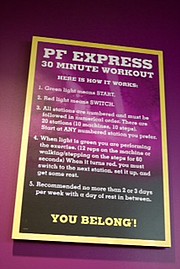 Short on time? Try a compressed workout at Planet Fitness.